A New Birding Location for the PhillyBirdNerds

I don't know how I came across the Delaware Valley Ornithological Club website, but it has a really handy section called "monthly recommendations" which describes local birding opportunities by month. June lists a few places that I have never heard of. Never. One is a horse farm in New Jersey which has field birds and another is Hawkins Road which lists nesting warblers. The site says that Hawkins Road is best in the first part of June - but if you read my last post then you'll know that the weather has not cooperated with that. So, June 21st was the day that we decided to go explore the new place.

One of the attractions to Hawkins Road is that it's pretty close to Philly just in Medford Lakes. It only took 45 minutes from my house but of course it took us longer on the first trip. We only had vague directions from the web so we went to far North on Rt 70 and had to turn around. But we finally found the pull out for the preserve at the high tension line cut. Here is the Google map link

Don't get me wrong, we did this in the rain but at least it was light and intermittent rain. The power lines were buzzing and smelled like burnt electric. We walked along the service road under the power lines so that we could see some birds and maybe get some big tumors. The sand road and clearing turned out to be good for seeing birds like Blue-winged Warbler, Common Yellow Throat, Prairie Warbler, Indigo Buntings and lots of Catbirds. With all of the rain lately, the road had giant puddles and running water in many places. We did our best not to get too wet.

We finally found a true trail at the third power line tower and took the opportunity to get out of the rain and into the woods. We were immediately greeted by Ovenbird and Pine Warblers mixed in with Chickadees and Gnatcatchers. Then we came across an old Chevy Vega on the trail. Then we tried to track down a Black-throated Green Warbler that we could hear very close but we could just not see it. Then more Chickadees came in and another bird that sounded different. And there it was, Prothonotory Warbler for a fleeting second and then gone. It was mentioned on the DVOC website as a nesting bird in the area and we were walking along a very very small creek at the time. Unfortunately, I was the only one that got a look at the bird. Lori never got to see it although we heard it calling for 5 minutes before it went silent.

Anyway, it was great to explore a new place that turned out to be a good birding location. We got 30 birds in all which is good for us. We even got very close looks at a Broad-winged Hawk in the woods.
Posted by Linda No comments:

Oy. It's been over 2 weeks with no post. That is due to the $*#!% rain. No birding opportunities before or after work or on the weekends.

Di, Barbara and I went to Delaware Water Gap on Sunday. Di and I took the canoe for about 5 miles downstream ending at Kittatinny Ranger Station. It was literally the only nice day that we've had in weeks. We saw some things along the river including a few female Common Mergansers (where are all of the males?), Cedar Waxwings, Baltimore Orioles and the like. Nothing to write home about.

Lori and I plan to go to Beaver Swamp this weekend - depending on the weather - to see if we can find nesting warblers as listed on the Delaware Valley Ornithology Club website:
http://www.dvoc.org/DelValBirding/MonthlyBirding/MonthlyIndex.htm

Wish us good weather. . .
Posted by Linda No comments:

Connie and I went up to the camp in Potter County this weekend to do some work in preparation for the July 4th trip. We needed to cut down some limbs and prepare a spot for the Bounder since we'll be taking it up for the first time over the 4th. What good timing too, because the Potter County Bird Club - of which we are members - was having their first summer picnic at Lyman Run Lake on Sunday. We would finally be able to make a meeting after being members since Sept.

We arrived Saturday afternoon and decided to just stay around the cabin. All of the usual birds were there plus we heard 2 Pileated Woodpeckers calling in the woods behind the camp and found a Green Heron in the pine trees out front. The Bluebird baby was fledged so I took the old nest out of the box. They were building again by Sunday afternoon. I'll bet we see another baby on the 4th.

Flies
The trip was also full of black flies. We couldn't sit outside for more than 30 seconds without being swarmed. No amount of deet seemed to keep them away. They didn't bite but they were maddening just the same.

Caterpillars
And tent caterpillars. Everywhere. It sounded like it was raining in the woods but it was just caterpillar poop falling from the trees. I'm not kidding. The ground was covered with little black dots of caterpillar poop and half chewed leaves. There were caterpillars all over the place including on us. What a shame. Bringing the story back around - someone from the bird club told us that Cuckoos are one type of bird that actually eats tent caterpillars. Maybe that's why we saw so many Cuckoos on this trip and have never seen one in Potter before.

Pies
The Bird Club picnic was great. We arrived late and found only one person at the picnic pavillion. He told us that the group was up the road looking at a Pied-billed Grebe nest. We went to join the group and found them with scopes trained on the nest. It is very unusual for Pied-billed Grebes to nest so far south. We made our introductions to the group and lingered to see the female leave the nest and get some fish, several babies try to swim and the male diving, swimming and calling on the lake. There was also a male Common Loon on the lake. Another unusual sighting. The club members think that he is either a young male that isn't interested in nesting yet or an injured bird that couldn't make it further north.

More Pies and The Club
Mary coordinated the picnic. Larry manned the grill and cooked the hotdogs and hamburgers. All of the club members brought a dish and each was delicious. What a nice group of people. Everyone introduced themselves and made us feel welcome. Connie made baked beans (so did 2 other people). We all ate very well including desert which included a Lemon Chiffon Pie. David led the meeting with unusual sightings in the county and a recap of the Austin Bio-blitz that was sponsored by the high school. Scientists from all over descended upon the area around the ruins of the Austin dam (the dam that could not break but did in 1911 after only 2 years) to count and document anything living.

The day was capped off with a Bald Eagle catching and eating a fish at the lake! A pretty good trip over all.
Posted by Linda No comments:

The theme of this post is nests. My Grandmother's house in Cinnaminson has been for sale since last September. It is finally under contract. My Grandmother hasn't lived there in over 2 years since she has been living in long term care facilities - first in Moorestown and now in Florida. My mother and I went through the house today for the last time. It's sad to go through a house that you have known for 35 years to take things that mean something and leave others behind knowing that they will be discarded by the new owners.

Take Peter for instance. Peter is a life size boy doll that my Grandmother has dressed in his Christmas best and only brings out of the closet (no comment) at Christmas time. Peter has been with us for 50 years but now he's sitting in the basement and probably doomed for the trash (which is where my Grandmother found him in the first place).

Our house is starting to look a lot like my Grandmother's house. We now have an entertainment center, sleeper sofa, dry bar, kitchen table and chairs, and other knick-knacks that belonged to her all over our house. I just can't bear leaving them behind. In addition, our dining room set and spare bedroom set belonged to my mother. We have them for the same reason. The only room that is completely void of hand-me-downs from other nests is our living room.

On to the birding part of the bird blog. While my mother and I were at my Grandmother's house today, we noticed another new resident that had a nest - a Robin had build a nest on the kitchen windowsill. I guess it's been so quiet with nobody living in the house. Here are some photos of the nest with eggs and chick: 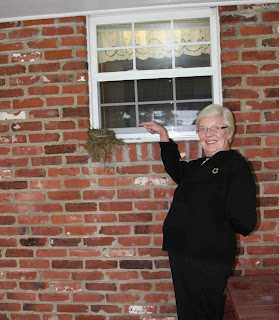 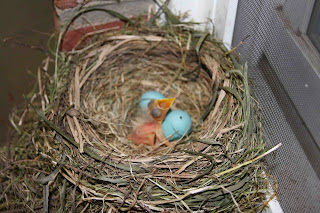 Not much happening bird-wise here. I go out with Binoculars but don't see anything to report. Lots of Cedar Waxwings and such. I hope we see more at the cabin this weekend. We also plan to attend the Potter County Bird Club picnic on Sunday. Stay tuned . . .
Posted by Linda No comments: