Mr. White's first name? Bob. As in Bobwhite. As in quail. Harvey, Barb and I ran into 2 Bobwhites today at The Nature Conservancy's Meadow preserve. These birds are very tame because they are raised from eggs to chicks by various nature agencies and then released into the wild. The idea is that they will be hunted later on (sick, I know). Anyway, these 2 Bobs put on quite a show today. The older guy was calling "bob - WHITE"

And then the younger guy would call "bob - WHITE"

It ended up as a dual of quail with the old guy calling "anything you can do, I can do better"

The old guy shouting "No you can't"

And the young guy shouting "Yes I can"

In the end, the young guy was definitely winning the shouting match and also started chasing the old man around. The old man gave up and found a friend.

The young guy posed for more photos. This one with the Cape May lighthouse in the background.

A fun way to spend the morning before work for sure. After work, I hit the beach in the scorching heat and found a few banded Sanderling.
Posted by Linda No comments:

Email ThisBlogThis!Share to TwitterShare to FacebookShare to Pinterest
Labels: Bobwhite, cape may, quail, The Nature Conservancy

On our annual trip to Connie's family cabin in Potter County, our friend Frank gave me an assignment. He wants photos of all of the birds that are found on Hogback Mountain - the mountain and area surrounding our cabins. He specifically wanted a photo of Hooded Warbler which we hear in the woods all around the mountain. Hooded warblers are easily heard. The male's song is very loud and distinctive however, seeing the bird is challenging. Photographing them is even more difficult since they are a bird of the deep woods with low lighting.

With 4 days to accomplish the task, I set out to photograph Hooded and other warblers. Started slow due to some torrential rain. This Common Yellowthroat was happy when the sun came out.

I got a bonus with Blackburnian wablers posing for me. Here is one guy who came to investigate me and Peanut right outside of our cabin.


Here is Yellow-rumped warbler in the pine trees near the house. I forget that these birds nest in Potter County and am pleasantly surprised when I see them flitting around.

Meanwhile, we found another accommodating Blackburnian warbler up at the slate quarry. This time, I used sound recording on my iPhone to draw the bird closer. Here he is looking at me like "you're not an intruding male, why do you sound like one?"

Once he checked me out and figured he was safe, he hung around the rocks and picked up a few bugs to munch on.
There is a great spot to watch and photograph birds down along the stream. I headed out by myself one morning in hopes of finding a few birds. Luck was on my side. This juvenile Black and White warbler picked bugs in a tree right beside the bridge at eye level.

He didn't care about my presence at all.

He was doing a great job feeding himself.

This Yellow warbler also showed up to feed his baby in the same tree. That baby looks big enough to get her own food.

I ran across this family of American Redstarts at their nest just upstream from the bridge. Here is Mom checking up on the 3 babies.

Here is Dad feeding one of the babies a big fat insect. Male Redstarts are very colorful with black and orange markings.

I made great progress with the warblers but struck out on Hooded until our last day. I finally ran across this female at the edge of the path, close enough to photograph.

I noticed that she had that big bug in her mouth and sure enough, the baby appeared and screamed to be fed.
Dad was close by keeping an eye on the situation.

Finally, assignment accomplished! But that didn't end the photography. I also ran across this baby in the woods.

And these Mandarin duck babies at the campground where they are kept as pets. All three are named Daisy.

Every year, I wonder why we don't stay longer. (oh yeah, because we have jobs)
Posted by Linda No comments:

Remember Mandy, our friend that took us on a tour to begin our trip? Well, she drove down to Kenai to meet up with us again and take us salmon fishing. So after a 9 hour boat trip, an hour drive back to the hotel, Mandy picked up me, Di, Barbara and Todd and took us fishing on the Kenai river. Did I mention that it was after 9 PM when we started?

We laughed pretty hard when she told us that we would be fishing without bait. "Just flop it out there" she said. "Start upstream at like 11 o'clock and let it drift to 2 o'clock, then reel it in hard". Does she think I'm an idiot? No bait? The fish is just going to bite at an empty hook? I guess I'm an idiot because I stood there on the bank of the Kenai river flopping the line in at 11 and yanking at 2. Nuts.

No fish but alot of fun anyway fishing at midnight. 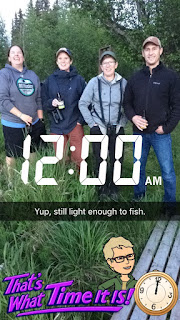 The next day we decided to be land lubbers and go hiking. Here is the gang at Kenai National Wildlife Refuge. 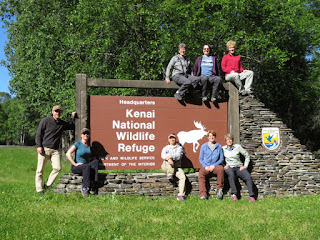 We found a great hike with spectacular views of the Russian river canyon. 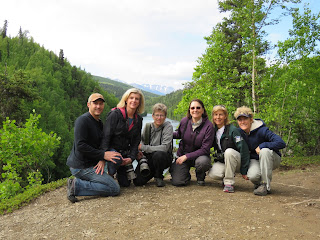 We had one last target bird to find - American Three-toed Woodpecker. They like burned out forests.

We heard a woodpecker calling from the burned trees but we couldn't see it. Where was it? I stood there wondering and then looked above my head. Ta-da!

A great ending to a great trip. So many photos and stories that didn't make the blog or Flickr or even the photo album. One thing is for sure - this trip is now known as our first trip to Alaska and certainly not our last.
Posted by Linda No comments:

We ended our trip to Alaska on the Kenai Peninsula which is south of Anchorage. Kenai Fjords National Park is famous for fishing, glaciers and other wildlife. There are 2 destinations and of course, they are on opposite ends of the peninsula so we decided to stay in the middle. Our first destination was the port of Seward. We booked a 9 hour boat tour of the Fjords. We arrived at the dock early. Way early, as in the day before. We wanted to check out the town do a little shopping and have a nice dinner to celebrate my birthday. The recommended spot was Ray's. We had a great time and to top it off - my mother paid the bill! Can't beat that.

The boat ride was, in one word, AWESOME. The weather was perfect, the crew was knowledgeable (and mostly female including the captain), the food was good, the views were unforgettable and the wildlife cooperated.
We took the long tour so that we could get out to the Northwest Glacier which is pretty spectacular and so that we had a longer trip to see wildlife. We passed multiple rock islands on the way out which are the favorite nesting places for many sea birds such as Common Murres.

And the stars of the show - Puffins. Alaska has 2 types. This is Horned Puffin which look similar to our Atlantic Puffins. We saw hundreds of these flying footballs on the trip.

But these Tufted Puffins are really different with their yellow tufts blowing in the wind.

Another puffin like bird is Rhinoceros Auklet. We saw a few of them. The name comes from the funny "horn" on the beak which is really just a feather.

Black-legged Kittiwakes nest on the cliffs of the rock islands by the hundreds too. They always look like they are smiling.

The strangest bird that we saw on the trip was a Bald Eagle. Doesn't sound strange right? Plenty of Bald Eagles in Alaska but this one was swimming. Yes, swimming. Here he is in the middle of the fjord doing the butterfly stroke.

Here is is getting close to shore.

And here he is hauling his catch out of the water. It was pretty incredible.

We arrived at the glaciers and it was pretty dramatic.

We watched global warming in action.

The crew scooped up some ice so that we could have million year old ice cubes in our drinks.

We didn't need the ice since we were drinking Alaskan beer.

Todd and I were really looking for a special bird that can only be found in the glacial ice but we didn't find one. Our disappointment was alleviated by the sight of Orca Whales. A pod swam past our boat. Here is a Mom and baby.

Dad was a big dude! This is his dorsal fin which stood out of the water by 8 feet.

I captured the whole scene with this shot. Breathtaking.

Just when we thought there couldn't be more, we pulled back into the docks and saw even more. While we were nature watching, other boats were out fishing. Almost everyone came off the boats with fish. Mainly Halibut and Salmon. Check out the size of this gal - 200 pounds.

The fishermen (and women) weren't the only ones feasting on the fish. The Sea Otters know that when the boats come back to the dock, they will get the fish scraps. They hang out below the filet table and just wait for manna from heaven.


This guy didn't need the handouts. He found his own crab and boy was he happy!

What a great day on the water.
Posted by Linda 3 comments: