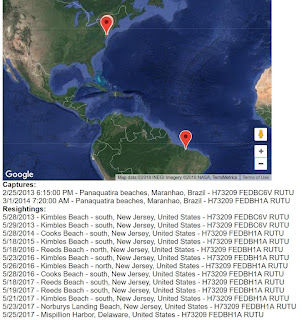 A Great Find in Pennypack

I've been taking Peanut to Pennypack park in the mornings lately. We've been running into the Director of the Environmental Center, Pete almost every morning. He's been birding before work too. Each day, we exchange sightings and sometimes walk together for a short stretch. We found some nice warblers including those that I posted about last week. On Friday, he was all smiles. He found a  Barred Owl along the stream. That is a rare bird for Philadelphia. I hustled to the spot but only found owl poop. No owl.

On Monday, the Barred Owl was sitting along the stream again. I took a few photos and left him alone. On Tuesday, I saw the Owl again and tried not to disturb him but he was disturbed anyway. Owls are harassed by other birds in the woods when they are spotted. The birds want the Owl out of there territory so that they feel safer. This Blue Jay was absolutely on a mission to get the Owl to move on. The Jay would sit close and squawk.

The Jay moved all around the Owl but mainly sat on the branch above the Owl's head.

And whacked that Owl in the head!
The Owl took the abuse and just ducked.
I think this is the Owl's tactic. Just sit still and take the abuse and let the attacker get tired or bored or both and leave. That is exactly what the Jay did. He left. I took one more photo.

And the Owl was finally left undisturbed.
Posted by Linda 1 comment:

Migration at the shore seems to be hit or miss lately. I remember back in the 1990's that every time I made the trip to Higbee beach, there were birds in spring. Nowadays it seems like most days are pretty unremarkable at that site. Today was no exception. Peanut and I showed up at 6:30 AM and walked the fields all the way back to the pond. Hardly any birds were singing or seen. A single Chat was singing away and attracting attention but that was about it. We left and headed back to The Villas to see if any birds made it to Cox Hall Creek. Nope. No bird singing in the parking lot. No birds singing along the trail. Luckily, Harvey saved me by calling to say that he was going to see the Swainson's Warbler that has been seen at Cape May Point. The bird has been here for a few weeks but getting to see it is tricky.

Swainson's Warblers are southern birds. They are drab colored skulkers that walk around on the ground and hide in the underbrush. Many birders hear Swainson's but do not see them. They stay below the Mason-Dixon line. I've been lucky enough to see one in Texas and hear many and see one in North Carolina. Today, Harvey and I went to find the celebrity bird and were really lucky. This poor guy is singing his heart out for a gal but sadly won't get one to respond. Not only did we get to hear his song but he perched in a tree for us too.

The photos aren't great because the bird was backlit by the sun but I assure you that many birders came out of those woods with NO photo at all.
Posted by Linda 1 comment:

Email ThisBlogThis!Share to TwitterShare to FacebookShare to Pinterest
Labels: cape may, swainson's warbler

Back at home and N-V-T-S with work but I managed to get out to see a few birds this week before work. I have been walking Peanut at Pennypack lately due to bird migration and the fact that our "Mudhole" is being developed for 62+ housing. The contractor sprayed herbicide last week to kill the vegetation so we stayed away. At Pennypack, we managed to pick out a few golden nuggets including a Hooded Warbler for the second year in a row. Not the best photo but at least I managed to get one. Hooded Warblers are notorious for signing and hiding in plain sight.

Blackpoll Warblers have the reputation of being the last warblers to migrate through in spring. Not this year. I heard and saw many already and migration isn't even in full swing. This guy was singing at the top of a tree in the field.

Both birds were also seen by the park administrator and another local birder. I met up with them on the trail as they started their day off of birding. The woods were alive with the song of Wood Thrush. They are really active and out in the open this week. Such rich colors.

Wood Thrushes are HUGE compared to their cousin the Veery. This is the first one I've seen this year.

On our way out of the park, we saw this Red-tailed Hawk with her breakfast. Yummy squirrel. Not a great photo. I didn't want to move closer and scare her off. Sometimes the bird drops the prey when spooked and I didn't want that to happen.

Spending Time with Owls in Florida

Connie's sister now lives in Cape Coral. This is an interesting area with many vacant lots. Vacant lots that are occasionally mowed and perfect for Burrowing Owls. The owls have babies in March and April. We spent time with these adolescents. They would all sit together and scream for Mom. 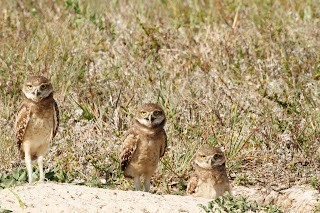 A bird flew overhead and they all looked up. 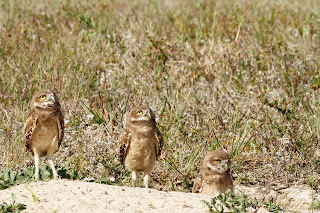 I don't think that all the babies at this burrow were siblings. I think they may be neighbors that hang out together until Mom or Dad shows up. Here is one Mom preening her kid. He or she seems to like it. 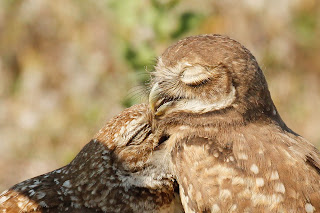 The kids occasionally try out their wings. 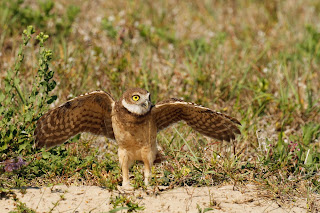 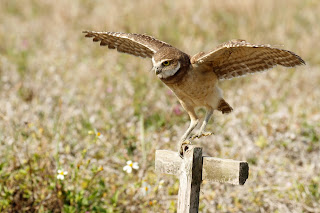 One of them flew across the street and went into a burrow. One of the remaining kids went into their burrow too. How would you like getting sand kicked up in your face? 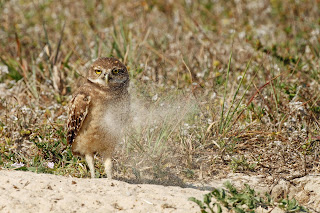 This kid hopped up on the wooden post and gave my car the evil eye. 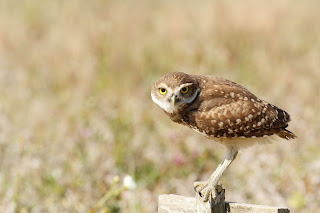 Fun times with owls for sure.
Posted by Linda 1 comment:

Florida has produced quite the number of blog posts this week huh? Like I said before, nothing is better than time to allow you to really watch and photograph birds. Connie and I went to Sanibel Island on Saturday and spent some time at the infamous Ding Darling NWR. There weren't many birds at the refuge but we did get to spend quality time with a few favorites. The first was an Osprey nest that was right next to the road. These 2 siblings were squawking for food while the parents were out fishing. Big brother had a fish while little brother (or sister) waited and cried. Once the younger bird started, the older bird would join in the crying.

Then, they would both stop and look around.

The older bird (the one on the right) would chomp away at the fish in the nest. Finally, he or she gave up and the younger sibling slid in for a few morsels.

Its a tough life for these siblings. Only the strong survive if there isn't enough food to go around.

I suspect that these youngsters will both turn out fine. Meanwhile, Connie and I drove a little further up the road and spotted the only Roseate Spoonbill in the whole refuge. The only one. They are called "Roseate" because they are pink.

The pink color makes them easy to spot. They sweep their bill back and forth in the water and then snap it shut if they find something.

They are called "Spoonbills" because that bill really is shaped like a spoon if you see it from this angle.

Here is a video showing the feeding motion.


While we were studying the Spoonbill, the Ibis were intent on fighting over something. They kept leaping in the air and poking at each other. I captured this shot in mid-air.

You can see some detail in the cropped shot here. The bird on the left is an adult male. You can tell by the deep red facial skin and dark bill. I guess he had a beef with the young guy.

We found other critters too. Have you ever seen a crab with no claws? Its called a Mangrove Tree Crab.

And this Anole showing off his neck thingy to impress the ladies.

Like I said, if you have plenty of time and just a few birds to look at, you can watch some interesting behavior and maybe take time to look at the other critters around you.
Posted by Linda 1 comment: