Summer at the Shore

Summer at the shore means "fall migration". Lots of birds are on the move heading south and stopping by our beach on the way. Here are a few recent shots. First is one of our local Bald Eagles. This family likes to sit on the mud flats at low tide.

He or she eventually flew off.

Another interesting raptor came swooping along the beach. This time, a Peregrine Falcon trying to grab a Sanderling for lunch. I wasn't quick enough with the camera to get a shot of the raptor actually dive bombing the peeps.

He or she was pissed after missing the meal. You can see that this bird has a black and green band on the leg. I'm trying to find out information about where it is from.

Speaking of pissed off, I watched this neighbor try to start the outboard engine on his boat 2 weeks in a row with no success. 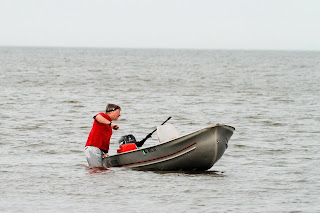 I would have given up and sunk the boat but he took it all with a smile and hauled the boat back to shore.

These Ruddy Turnstones were not impressed by his efforts at all.

Meanwhile out in the fields at Higbee beach we've been seeing quite a few of these Yellow-billed Cuckoos. They actually "cuk" and "coo" which is how they got their name.

This female Cooper's Hawk tried for a meal too. She chased a flock of blackbirds several times before taking a break. She looks pissed too.

I definitely saw a lot of life birds on the trip. A few notable birds that didn't make the other posts include some boring looking birds like this Gray Flycatcher.

And this Gray Vireo.

And this new species of Crossbill that is only found in the Idaho mountains. Cassia's Crossbills are non-migratory and have recently been "upgraded" from a race to a full species. They are specialized to feed on pine cones which they open with their crossed bills. We found these flitting around the trees in a state park after a pretty rough ride in the van.

On our way to see the Crossbills, we stopped at a spot that has hummingbird feeders to watch some little gems of the west. We spotted a few of the more common species and then found the one that I was hoping for - Calliope Hummingbird. This is the smallest of our hummers in the US and one that I haven't been able to see until now. Look at the gorget on this guy!

Here is a juvenile male that is just getting stubble on his chin like a teenager.

On our last day, we found a family of Sage-brush Sparrows.

We also saw some great animals on the trip. One that I was really happy to see and photograph was Long-tailed Weasel. We watched this fast critter dart around the sage brush. I was lucky to snap this shot which shows how long the weasel is.

He finally stopped for a few seconds and looked right at me!

It wasn't just little critters. On Antelope Island, we found the large mammals. This Mule Deer was the king of his domain. They count the points on the antlers only on one side. Tim said that this was a 6 pointer. Hunting is only allowed by lottery that costs more than $100,000 so this guy might be safe.

Antelope Island is known more for it's Bison than Antelope. Here are a few roaming the grasslands.

And here is what we refer to as Antelope but it is actually called a Pronghorn. We spotted a few that didn't run off.

That's a wrap for this trip. I would do it all again and recommend that you go too.
Posted by Linda 1 comment:

Did I Mention the Owls?

One of the main targets for the trip to Utah was Flammulated Owl. These little owls are related to Screech Owls and found out west. Our tour guide, Tim Avery is an expert on these owls and took us to the mountains to find a few on our last night.

But before we got to that, we saw other owls on the trip. We found a few Burrowing Owls out in the fields. This one sat up on a dead stick for us. 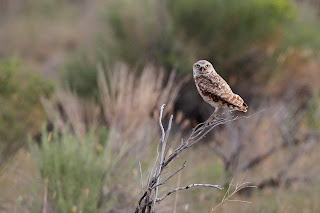 The biggest surprise were all of the Barn Owls that we saw. While looking for the Gray Partridge, Tim told us to get out of the van and walk along the road in case there were partridges in the weeds. He figured that they would react to us more than the van. He parked at the end of a farm field while we walked. There was a row of pine trees along the road. When we approached, an owl flew out into the field. Then another owl flew out. And another one, and another one, and another one, and . . . a total of 10 Barn Owls flew out as we walked past. I caught a photo of this one as she flew above our heads. 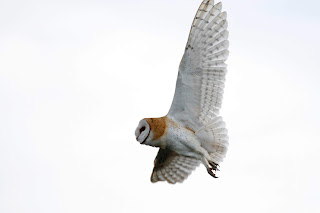 I spotted this one still roosting in the pine trees. He was nervous but held his ground while we walked past. 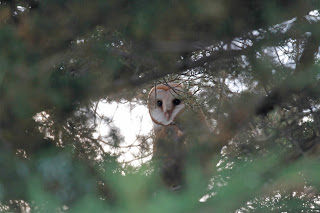 Some of the other birders watched the owls perch in another tree. I was glued to the birds in flight. They were just majestic to watch flying over the farm fields as they headed back to the pine trees. 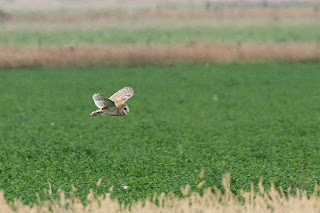 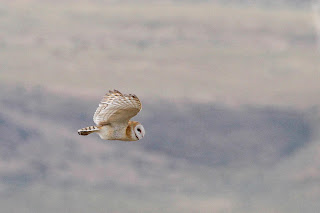 Our guide acted like he didn't know that the owls roosted in those trees. Whether he knew or not, we all had an experience of a lifetime.

The Barn Owl that we all knew about has a nest box in a hay shed on Antelope Island. After spending time watching the phalaropes, we headed to the shed to see the owls. We expected to see the Barn Owl but we didn't expect to see this gal - a Great-horned Owl sitting on the beam. 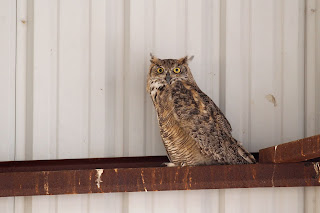 Her mate was also in the shed. This dumb guy insisted on sitting on a rafter that was too close to the roof. Ridiculous. 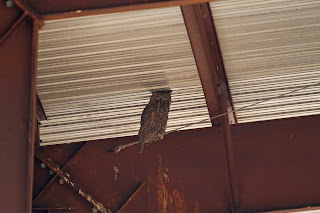 Even more ridiculous was that these Great-horned Owls share the shed with a pair of Barn Owls. This is highly unusual since Great-horned Owls usually kill anything that they come close to including other owls. Our guide told us that these 2 species co-exist peacefully presumably because there is enough food for all. You can see the Barn Owl in the box in this photo with his neighbors just a few feet away. 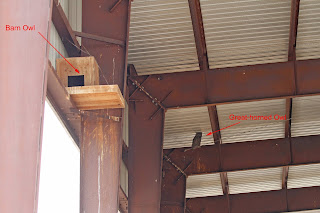 We finally headed out for the Flammulated Owls that evening and found many. We heard about 10 owls, saw 5 and photographed 3 including this one. 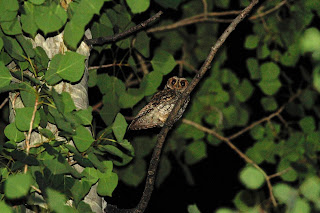 I was really happy to see so many owls on the trip including the uncommon Flammulated Owl which was a life bird for me and a few others on the trip.
Posted by Linda 1 comment: