So, we had an earthquake, a hurricane, and some tornadoes in Philly this week. Pretty unusual for our part of the world and certainly unusual back-to-back. The earthquake was really freaky. I was in my office in Center City and didn't know what was going on for a few seconds. At first, I thought it was Roxy under my chair moving around but then my coworkers started getting out of their cubes and looking at me like - "What do we do? It's an earthquake!". We all stood outside like dopes for 20 minutes (which is the opposite of what you are supposed to do in an earthquake) before returning to work.

The weather people sure played up Hurricane Irene to the point that Cape May was evacuated, Septa stopped running, etc, etc. and it turned out not to be that bad. Barbara, Di and I headed down to the shore on Sunday to see if the shacks were still standing - which they were - and to check out the "storm birding" scene. Not familiar with storm birding? Well, it is when birders rush out after a big storm to see rarities. It is a big deal with hurricanes since they tend to blow tropical birds far north so rare sightings are quite common.

Check out the scene at the Concrete Ship at Cape May Point. This is 2:30 PM on Sunday with 45 MPH gusts and sustained winds of something like 25 MPHs which sandblasted the skin off of my legs. That is why we are all huddled together next to the Sunset Grille (great grilled cheese sandwiches btw). Sadly, we can no longer deny being the nerdiest of nerds after seeing this photo. 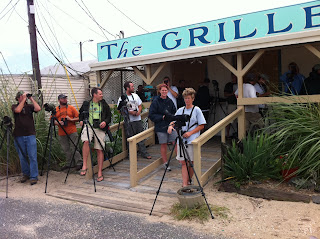 Our deniability is also out the window since this scene was made public on both the Cape May Bird Observatory blog (that's me in the front looking through the scope, Di to my left in the red and Barbara to my right in the navy) AND The Philadelphia Inquirer (that's Barbara on the extreme left in the photo).

We got to see the unidentified large swift and all of the terns mentioned in the blog post. We were too late for the petrel and the tropicbirds though.

Brown Booby persists on the channel marker. I wonder when that bird will go south?

You didn't think that I would leave that last sentence hanging there without more about the Booby did you? Sam phoned me to tell me about the Brown Booby - a rare bird for the north - that was sighted sitting on a channel marker in Jarvis Sound. Then he called back to tell me that the bird was sitting on marker #475 - to be exact. I immediately asked our captain if we would be passing that marker and that a rare bird was sitting on it. The captain told me that he saw the bird on the morning trip and yes, we would be passing it.

Here is the calm, idyllic scene. 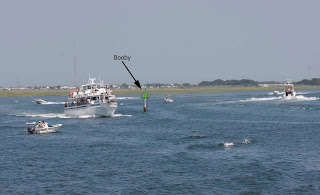 The Starlight boat, which is closest to the marker in the above photo, is the sister boat to the one we were on. I was standing on the top deck photographing the bird both on the way out and the way in. Eye level, up close views of the bird! And thanks to Captain Chris for slowing the boat down when we were next to the marker so that we all got great looks and some good photos. Enjoy. 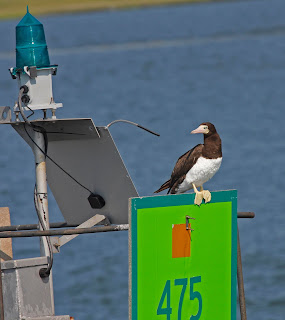 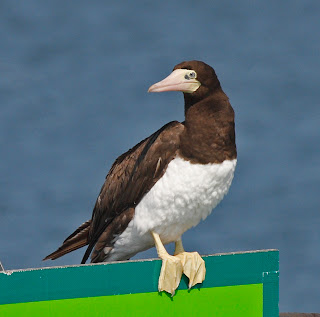 This is an adult bird told by the white belly, yellow beak and feet.

He sat there as if it were perfectly normal for him to be there. In fact, he was still there today (Tuesday). I hope he gets home soon although its been quite fun to write about boobies!

Question Us? You Have Some Nerve!

OK, are you back. Well, what I didn't tell you (because I didn't think it was post worthy) is that we saw 33 Pelicans flying north along the bay too. The first group had 28, then 1 straggler, then 4 more. My math says 33. Anyway, we entered it into eBird along with the other sightings including 52 Snow Egrets, etc, etc. A few days later, Barbara gets an email from an eBird guy asking if she was sure that she saw Pelicans. Pelicans! Ummm yes, we know what Pelicans look like. They are pretty unmistakable. They look like this: 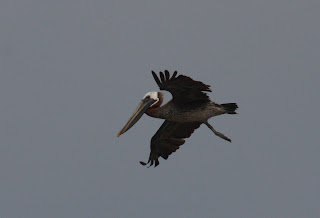 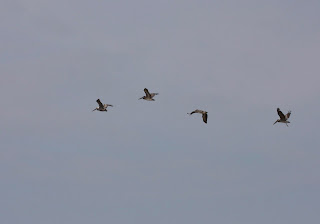 So Barbara emails the guy back and says something kind of sarcastic like. Ummm, I may not be an expert birder, but I know what a Pelican looks like. Yes, I'm sure we saw Pelicans.

Fast forward 2 weeks ahead to this Saturday. We read a good amount of postings stating that the southbound migration was picking up and that Tom Johnson was back on duty at the Higbee Beach Dredge Spoil Dike doing his official counting so we decided to make that our destination. We expected a crowd of birders to be there, but when Lori, Barbara and I arrived, we were #3, 4 and 5 on the Dike (lots of sophomore humor can go here). You can see alot from up on the dike including the Cape May-Lewes Ferry, the entrance to the canal, and part of the bay along with woods and marsh. Tom and the other guy were busy calling out and recording passing birds (which looked like little bullets to us). The birdnerds were looking at anything that moved and wracking up a good list thanks to the aid of experts.

During a lull in the action, Barbara starts to tell us about the eBird guy who questioned the Pelican sighting and do we believe that someone would question something like Pelicans as if they could be mistaken for something else. With that, Tom starts giggling and says "uh, this is the guy that questioned the sighting"' and points to the other guy! Oh, just great. The guy's name is Sam and we see his name all over the tweets, texts, and alerts about unusual sightings around Cape May. Sam starts giggling too and apologizes to Barbara saying that he hit the "send" button to soon and really meant to ask if she was sure that she was at Davie's Lake since 33 Pelicans is a really good sighting for that area. Well, we all had a good laugh and from that point forward, all birds that flew past the dike were Pelicans!

We even invited Sam to go out on a whale watching boat with us later that afternoon since we had 2 extra tickets. I gave him my phone number (again, lots of jibes can be inserted here) and asked him to let us know if he could use the tickets. Well, he called back to say thanks for the offer but that he was going out on another boat to verify a sighting of a rare Brown Booby (more sophomoric humor here) that was spotted in Jarvis Sound sitting on a channel marker.

Villas Beach - Birds are Back

Shorebirds are beginning to arrive back at the Villas beach after a month or so of absence when they were in the arctic nesting. We have been kind of bored on the beach in July without the shorebirds and horseshoe crabs to worry about. This weekend we were treated to Sanderlings, Sandpipers, Ruddy Turnstones, and Plovers working the sandbars and shoreline.

We also had a large family of 11 Royal Terns hanging around. About half of the Royal Terns were banded with metal bands on their legs. I got pretty close for these photos, but still couldn't make out any numbers on the bands. Here is a group of bored individuals. Remember to click on the images to enlarge them. 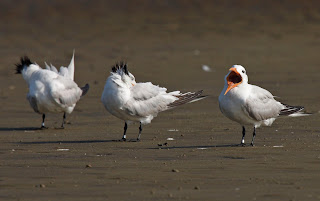 Here is an adult (black legs) and juvenile (orange legs). They would take off to the water's edge to bathe and return back to the same spot without care of my presence. 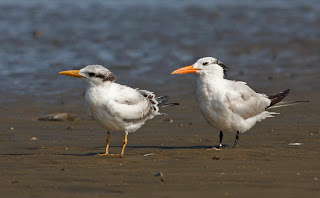 The Sandpipers are interesting. They are very territorial for their little piece of beach. Here is one bird picking a fight. 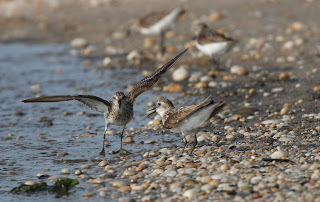 This guy just wouldn't let any other bird near his beach. He would squawk and chase them in this hunched-over posture until the other bird would leave. Again, this all took place 20 feet away from me. I guess these birds are used to being on beaches with people and dogs. 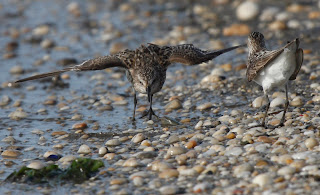 I love the look of the Sanderling. He (or she) is in the middle of his fall molt - going from brown and rust breeding plumage to gray winter plumage. I thought he looked great with the wet sand background. 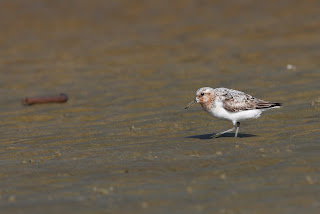 We finally achieved our summer goal of finding Davie's Lake, which is a little lake buried behind the sand dunes near the Concrete Ship. We have attempted the discovery 3 times before approaching from the south but were foiled by high tides and a fast running creek crossing. Well this time, we approached from the north which meant parking at Higbee's Beach, walking a mile down the beach and ending up on the right side of the creek to get to the lake.

We were definitely rewarded for our effort. Check out this seen at the mouth of the creek. That is the concrete ship wreck in the background: 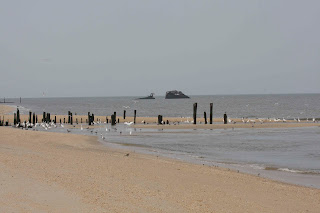 Here is another view of the scene shot from up on the beach looking down between the pilings: 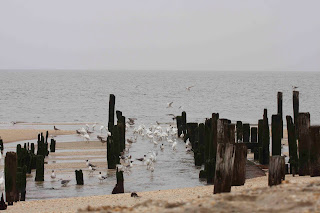 Here is a shot of a Ruddy Turnstone in pretty typical environment. They like to pick around the beach and on the rocks. They return to the Cape May area in late summer and some even hang around through winter. 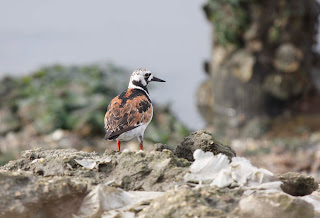 Finally, here is a shot of a Least Tern feeding it's "baby" on the beach. These are the smallest terns in our area and are endangered. We are lucky to have so many of them in Cape May along both beaches. This guy better learn to fish for himself soon. 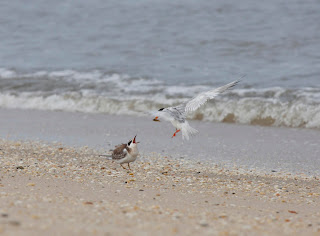 Davie's Lake itself was a bust. No birds on the lake and all of the Egrets that roost back there were at the creek mouth as seen in the above photos. We'll check back in winter and hope for some ducks.

As a post script - I am writing this blog a week after the actual event. I am in Tampa airport returning home from Florida today. My mother is doing better after hip replacement surgery and is home now. I didn't get much birding on this visit. Typical Florida birds on the golf courses.