Each Christmas week for 111 consecutive years, the Audubon Society has sponsored the Christmas Bird Count in order to get data on birds that winter in the United States. This is my first year doing the count and I didn't really know how to get involved. The Audubon website makes you pick a "circle" closest to your zip code and then sign up. A circle is literally a circle on a map where Audubon has determined a count can take place. No circles showed up around 19046 (Rydal, not Jenkintown) which were "open". An open circle means that any individual can sign up on the website, download the forms, pick a date between Dec 11 and Jan 4, and count. So, I was at a loss about how to sign up.

I emailed the local chapter of Audubon Society and asked if the BirdNerds could join a circle. Andy emailed me to say that he could use help at Gwynned Preserve. I thought "great, we can help the leader". Um, no. I was the leader. No problem. The nerds plus Renee and another woman named Judy went to Gwynned on Dec 18th. None of the nerds have ever been there before but Andy told us to look for the Harrier - which we saw. Did I mention that it is December in Pennsylvania? F-ing freezing. I decided to break out the deal of the century from Cabelas as a joke: 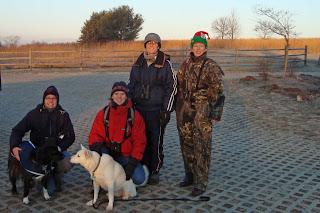 No joke. I wore it the whole day - along with the funny elf hat that my mother sent me for Christmas. I got the one piece women's camoflage hunting suit (with hood) for $49. I couldn't pass it up.

Then, Patty sends my name into another Audubon guy and tells him that I am interested in helping out. This guy hooks me up with the CBC at Norristown Farm Park on Dec 26th (today). Of course, I didn't learn my lesson about the freezing cold so I went along. This time, I wasn't the leader thank goodness. This time, Barbara (not the nerd, but another good birder) already scouted the area and told us that we would probably see a Great Horned Owl - which we did at 0'dark:30. We also saw another 42 species. Did I mention that it is December in Pennsylvania? F-ing freezing AND F-ing snowing. The camo didn't come out today since it was my first time meeting these nice people: 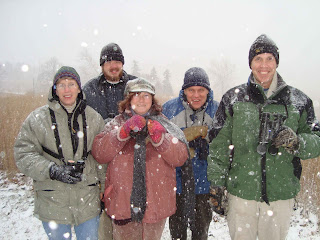 Believe me, there are long underwear under those jeans. This is taken at Valley Forge National Park. You might as well be able to see General Washington commanding the troops in the background.
Posted by Linda 1 comment:

What kind of title is that for a bird blog, you ask? Good question. It seems like my 2 pastimes (obsessions) continue to merge - women's ice hockey and birding. Most of the 6 current BirdNerds are hockey players who play for the FREEZE or the Predators. In fact, only Connie is not an ice hockey player, preferring field hockey instead.

We are doing the Christmas Bird Count this year with Renee, from the Phoenix. We have been to hawk mountain with Amy, a new birder from the FREEZE. I have also had requests from Loreen of the Predators to join an outing.

And now Patty who is an avid birder has re-joined the FREEZE. On top of that, Patty is even sending awesome photos from her outings. Here is a great shot of Harlequin Duck at Barnegat Lighthouse taken the weekend after we were there. Why doesn't this happen to me? Every time I see Harlequins, they are bobbing on waves on rainy days. For Patty, they get up onto the rocks and pose in bright sunlight showing off their incredible markings. Gee whiz. 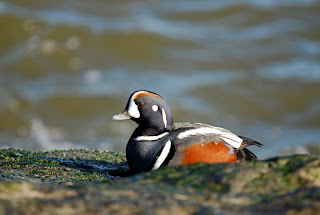 They are Really Blue

First question - why do Bluebirds look REALLY blue in winter? Second question - how come they never look as blue in photos as they do in real life? Here is a photo of a very cooperative Bluebird at Lake Galena on Saturday - the same day as the fashion statement. This bird sat on that stick for a minute or so before getting a drink from the creek. Connie was about 10 feet away but the bird didn't care. 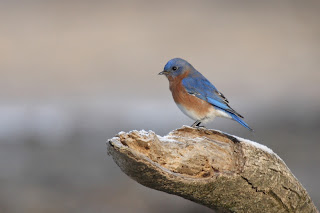 You can kind of see a hint of the "electric blue" at the edge of the wing, but it looked really bright in real life.

Third question - how come every time I enter sightings for Lake Galena, the "official" questions it? This time, he questioned Herring Gulls of all things. This time I sent him photographic proof. This is Great Black-backed Gulls (GBBG), Lesser Black-backed Gulls (LBBG), Herring Gulls (HEGU), and one Ring-billed Bull (RBGU) at the bottom left near the duck and goose. GBBGs are the largest gulls in the photo with black backs and flesh legs. LBBGs are the smaller gulls with black backs and yellow legs (hard to see in the photo). HEGUs are the gulls with the gray backs. RBGU is the one at the bottom left. 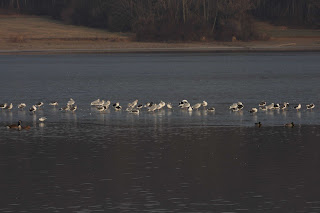 Click on photos to enlarge. By the way, that is ice that they are standing on. . .
Posted by Linda 2 comments:

Santa - Please Bring Us Some Style

Nerd Alert! If you are queazy, don't look at the photo. It may be unbearable to the fashionably sensable: 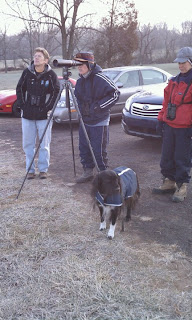 Check out the hats. Even the dog has a fashion faux-pas going on there. And what exactly could I be looking at?

Always something to see in Florida

Tara and I were down in Punta Gorda these past few days. On sunday we went up to Orlando to see the LPGA, set up shop at the 12th green, hoping we'd make it on tv. Did see bald eagle overhead, which was cool. We checked the broadcast later that night, and we were always just out of the shot. So, driving home on 17 south, another bald eagle crossed over our heads, and further south, near Arcadia, crested caracara, sitting on a fence post right next to the road, we were doing 60 MPH at the time, so we couldn't stop in traffic, but he was unmistakeable, with his black toupe. Love that bird.
We packed the cold weather and brought it down with us, went down to the low 30's at night and only 40's and low 50's during the day, so no golf, no boat. I did manage to check out 2 future sights for the bird nerds, right in Port Charlotte. Audubon Pennington State Park and Ollie's Pond. AP state park was nice, about a mile long, lots of yellow-rumps, got a great look at a Limpkin, saw what i thought was least grebe, but ebirder was quick to question me, so I think it was pie billed grebe. I can see where this park might be very warbler-y during migration. Driving home from the park, i look over and see........... a bald eagle, in someone's back yard. on the ground, picking up sticks. a bald eagle in a backyard, amazing!
Next up was Ollie's Pond. Lots of ducks: coots, moorhens, pie billed grebe, (yes pie billed), hoodies, blue wing teal, ruddy duck ( i think, needed captain linda there and barb's scope.) oh, and 2 bald eagles. and more yellow rumps. this is where they all are apparently.
That's it from florida, leaving tomorrow, and of course it's going back up to 78 on friday.

Lori
Posted by Lori No comments: 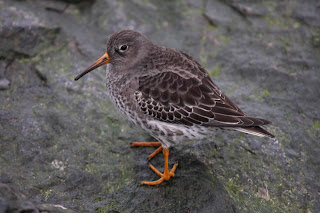 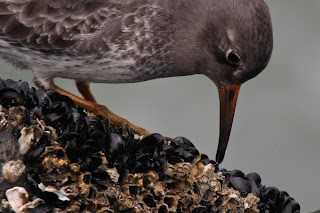 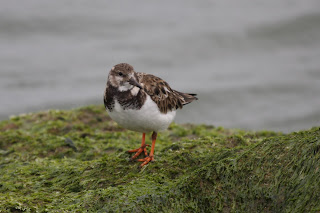 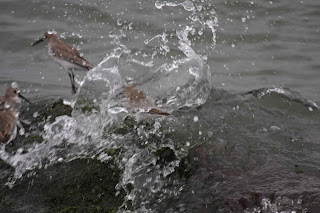 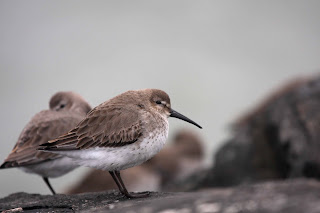 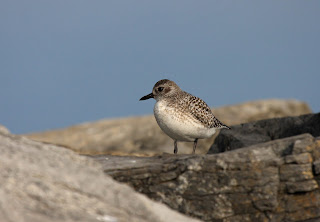 Fishing boat returning to port - lit up by a brief window of sunlight
Roxy wouldn't go up on the jetty. She was too scared. All three of the dogs had fun running in the sand along the jetty. But even they got cold out at the end waiting for me to take photos of Gannets diving for fish. They were actually shivering - although surprisingly Di wasn't. What's up with that?
Posted by Linda 2 comments: