Hurricane Ida put a big damper on our trip to Florida. Small craft advisories and 45 mile per hour winds kept us off of the boat for days. Upon arrival back in Philly, Ida stalled off of the New Jersey coast for another 4 days. Total Ida days for me, Di and Babs: 7. Seven days of gray skies, off and on rain, and nasty wind. Ida eroded beaches all along the coast and kept us all miserable for a week. That's the con.

Now the pro. Ida's northeast winds pushed 100's of Common Eiders onto the Jersey coast. Over 100 have been reported off of Cape May at St. Mary's by the Sea vacation convent and another 80 have been seen at Barnaget Inlet. Today I took the chance and drove to Barnaget Inlet. The weather was still overcast but no wind. I walked out to the end of the jetty and PAY DIRT! A raft of 100 Common Eiders, plus a few Harlequin Ducks. See below for photos: 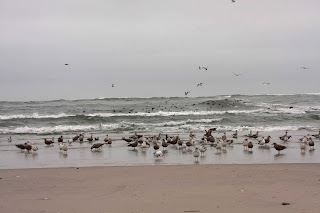 Herring Gulls on the beach, Eiders in the surf 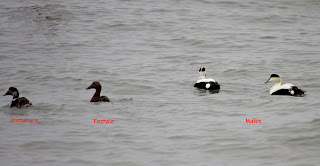 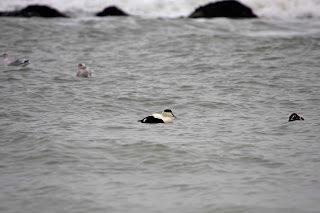 Herring Gulls, Eider, Harlequin Duck - all in the same frame
Here are some of the other birds seen at the inlet: 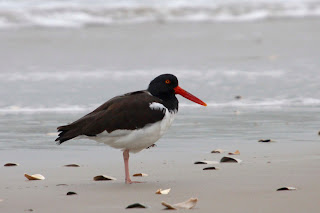 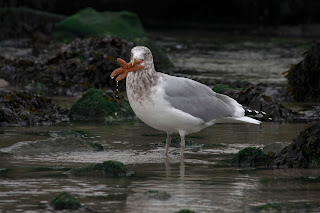 Herring Gull with a Starfish 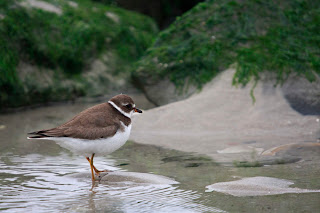 I hope you notice the new blog layout and especially the new title bar which includes 2 of my best photos. Burrowing Owl on the left is my latest life bird and baby Laysan Albatross on the right. Oddly enough, both photos were taken in residential areas. Laysan Albatross baby was sitting in the middle of a lawn in Kauai, Hawaii. I rested my camera on the sign stating to stay behind the sign. The Burrowing Owl was sitting on a similar sign in a neighborhood in Punta Gorda Florida.

Two of the birdnerds bought a vacation home in Punta Gorda on a canal with a boat dock but no boat. Another 2 birdnerds have a boat, but no boat dock. See where this is going? That's right, we towed the boat to Punta Gorda so that the girls could use it for the winter. What a trip that was. Of course, we blew a tire on the trailer and had trouble getting the boat started, but it all worked out and we had a blast birding by boat through the canals into Charlotte Harbor. More about that later in the week.

Now, about that owl. Who knew that such cute little owls could cause old men to be so grumpy? Lori read a report on the Internet about Burrowing Owls in Punta Gorda, so we had to track them down. The Internet report was all about the property owner (read grumpy old man here) wanting to collapse the burrows so that the owls would move and stop pooping on his door step. The owls are protected species. Bothering them is strictly prohibited so we figured that they would still be there.

Well, they weren't on the street named in the Internet article. We drove slowly through the neighborhood scouting probable burrowing spots. Scanning each yard carefully. Nothing. No owls. I finally asked an old man riding a bicycle if he knew about the owls. He told us that he was also looking for them and that they are usually on one of the streets in the neighborhood. He peddled one way and we drove the other way. Slowly. We stopped at a vacant lot with a patch of overgrown weeds. We were sure that this would be a good burrow location. Well, we were really sure once we read the sign that stated "Important Bird Site - KEEP OUT". That's a pretty good clue that the owls are around.

Enter the grumpy old man: A car pulled into the driveway on the lot next to the KEEP OUT sign. A man got out and yelled to me "that lot's not for sale" to which I replied "we're looking for owls" to which he replied "they're not there and I don't want people in my backyard" to which I replied "oh, I didn't know this was your yard since it's not mowed". He got back into his car and drove away.

Enter the nice old man on the bike: He rode up to us, chuckled about the grump and proclaimed "I found them, follow me". We proceeded to follow him over to the next block and here is what we saw: 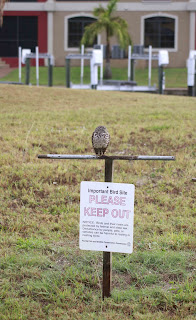 Pretty cool huh? Right next to another grumpy old man's house. He stuck his head out of the door and asked if he could help us when we were sitting in the car outside of his house gawking at the owl. What did he think we were doing? Why else would a car be stopped in front of that sign and that owl? To talk to him? Not bloody likely.

Here is another photo of the owl: 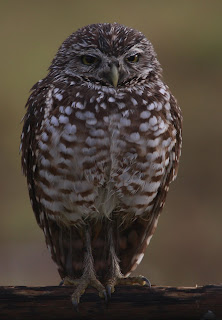 She Took the Book

Funny story. We took Mimi (our old cat) and Roxy (our itchy dog) to the vet last night. Dr. Kirkhoffer (Jane) has been our vet since we moved to Rydal. We used to see her often when Cocoa was alive since she needed a shot every month to control her Addison's disease (the dog, not the vet). You know that you are at the vet too often when you start to know her vacation plans and she knows yours. Jane was very excited to hear about our trip to Costa Rica in 2008 because that is where her daughter planned to do her "semester abroad" - all I got to see was the subway and the local beer joint when I was in college. Anyway, we lent her our Costa Rica field guide last November for her trip.

Last night (one year later), Jane greeted us by saying that she was thinking about us because she just gave the book to another vet at the practice since she was going to see her niece who is in the Peace Corps down there. She hoped we didn’t mind. It's fine with us.

That book is well traveled. . .