I feel sorry for all of you who had a bracket pool on the NCAA Basketball Tournament.  Two of the Final Four teams are West Virginia and Butler. I never even heard of Butler. Nobody picked these teams to go past the first few rounds.  It has been exciting to follow little teams such as West Virginia and Northern Iowa as they slayed the big names.  It was disappointing to see Villanova knocked out in the second round though.
March has also proven to be an interesting time for bird life at our house.  We had our third surprise March visitor today.  I wasn't blogging when the first surprise showed up in the yard a few years ago - a Woodcock fluttering straight up and down and making peenting sounds (yes, I spelled that right - peent) for courtship.  I also didn't have a camera ready that day, so there are no photos of that day's event.

Last March, you may remember that I saw and photographed a Ring-necked Pheasant hanging around the pond.  Here is a link to that post and a photo refresher: 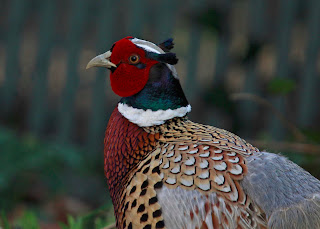 Well, today March Madness struck again!  I was washing up the breakfast dishes when Connie proclaimed "Oh - My - God.  There's a turkey at the feeder".  And sure enough, there she was pecking at the seed in the driveway as if it was her normal routine.  This is a photo through the kitchen window.  Kind of fuzzy, but I wanted you to see how close she was to the house: 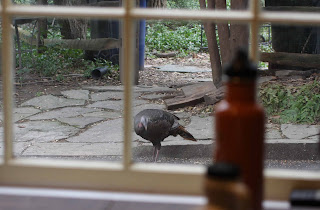 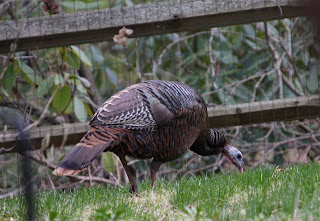 Which team will win the NCAA tournament?  Its anyone's guess at this point.  Will I have my eyes trained on the yard in March?  Absolutely.  You just never know who will show up next.
Posted by Linda No comments:

2 Memories of the Same Day

2 sisters are at the same place at the same time, doing the same thing on the same day - together, all day and yet be storing very different data in their brains.  Here is an example. Di and I went to Palmyra Cove birding today. Below are 2 accounts of the same day.


Diane:
I was up early but Linda was already gone to walk the dogs.  Linda made eggs and toast for breakfast.  I had scrambled and Linda had fried.  Then we went to Palmyra Cove for some birdwatching.  I drove the Mini because I wanted to get cheap Jersey gas while we were there. Linda took me the back way all through Abington, Cheltenham past the cemetery, and Philly to the Tacony-Palmyra Bridge - which was open and kept us sitting there for 15 minutes.  That reminded us of the time that we were late going to our grandmother's house when she lived in Cinnaminson and we got stuck at the bridge opening.  When we arrived and told her that the bridge was up she said that she knew.  We asked how she could know that the bridge was up and she said "because I called"  "Called who?" "Called the bridge.  When you were late, I thought the bridge might be up, so I called.  The man said that it just went down so I assumed you would be here soon."  That's Mom Mom for you.

Anyway, we finally got to Palmyra Cove and the police stopped us to say that we had to park in the overflow lot.  We parked and made funny, inappropriate comments about the other people in the parking lot then headed on to the trails. We saw some birds and walked for almost 2 hours. I had to find a bench to rest because my feet and back started to hurt. Then we decided to leave but I had to go to the bathroom in the nature center.  It's really nice inside.  We went to Wawa for the cheap Jersey gas, fountain Diet Cokes and sandwiches to take home for lunch.  I sent Linda in to order me a Wawa premium turkey, lettuce, tomato, pickles, little mayo on wheat, no toast; Lays Kettle Cooked chips with salt and vinegar, and a fountain Diet Coke.  When we left the Wawa, we passed the Savoy Caterers which used to be the Woodbine Inn where I used to go clubbing when I was in high school (don't tell my Mom) with my friends.  Linda said to pull into the Savoy because she saw some gulls in the creek behind the parking lot so we pulled in and decided to eat our sandwiches and look at the gulls.  How funny is that.


Linda:
Di didn't get out of bed until after I took the dogs to the field for a walk so we got a late start birding.  To make matters worse, the bridge was up and delayed us even more.  Then we couldn't get a parking spot in the main lot.

We finally got on the trail and immediately rung up 10 easy species. Then, Di saw something different which turned out to be male and female Eastern Meadowlark.  What a find!  We also got a great look at Swamp Sparrow, Fox Sparrow, White-throated Sparrow (male in great plumage) and Eastern Towhee.  We didn't get Spotted Towhee that has been at the park all winter but we did get Golden-crowned Kinglet.  We ate lunch behind the Savoy to look at gulls but they were just Ring-billed, nothing unusual.

So, months or years from now we'll see a Meadowlark and I'll have to remind Di that she saw one that day when we went to Palmyra Cove.  And we'll see a sign for some Savoy diner somewhere in the world and she'll remind me about the time we sat behind the Savoy-that-used-to-be-the-Woodbine in Jersey eating our sandwiches which were Wawa premium turkey, with cheese which she didn't want ( I ordered it wrong) and gave to me, lettuce, tomato, pickles, little mayo on wheat; Lays Kettle Cooked chips with salt and vinegar because she likes them occassionally, and a fountain Diet Coke. Remember?
Posted by Linda No comments:

Weather Fit for a Duck

I thought Hurricanes and Monsoons were summer weather events.  If yesterday's weather wasn't a hurricane, then what was it?  A Nor'easter?  I guess so.  That didn't stop the bird nerds from going to check out ducks at Lake Galena (Peace Valley Park).  What a couple of idiots.  I packed the spotting scope, binoculars, camera, and iTouch into Lori's Shmellow (big Ford Expedition) and off we went.

It was already raining all day.  By the time we got to the lake it was literally coming down sideways.  There were 3 foot swells and whitecaps on the lake that made finding any ducks nearly impossible.  We parked down by the dam which is where the ducks and gulls like to congregate.  We did manage to see the 100+ Common Mergansers floating around but none of the other ducks reported on eBird.  We headed up to the top of the lake to see if some other ducks were taking shelter up there.  I even made Lori get out of the car and wade through ankle-deep water to get out to the bridge for a better view.  Nothing but Tree Swallows. Nothing.

We got back into the car and headed to Core Creek Park.  The weather got worse. We still didn't see anything.  By the time we headed home roads were flooded, trees were down and the local police were closing roads.  I had 3 detours and no good ducks.

I guess the point of the story is that we could have stayed home but then we wouldn't have the experience.
Posted by Linda No comments:

2 more life birds for me today in Cape May.  The first was Eurasian Wigeon. 2 males have been seen for weeks at the Light House pond.  There were more than 50 American Wigeon on the pond with their white foreheads and green heads.  Then there were the two with buffy foreheads against red/maroon heads.  We probably would never have seen them unless I read about them on CMBO's blog and eBird for weeks.  We really concentrated and picked through the others to see them.

The second life bird was Great Cormorant (coooomarant, as we say) at Poverty Beach.  Again, we saw these birds perched on pilings and diving for fish specifically due to the blogs and eBird alerts.  Wow, these birds are huge.  63" wing span (that's as tall as me). The Cormorants were swimming along side Red-throated and Common Loons and Black Scoters.  There was a King Eider reported but we didn't see it.  We would have needed more time or a good scope.

Other highlights include 2 Bald Eagles, a Northern Harrier, 3 Red-tailed Hawks, and close up looks at Red-breasted Merganser and Bufflehead. Of course, no camera with me today.  Oy.

Other birds that we missed which have been reported in Cape May lately are Black-headed Gull and Redhead Ducks.
Posted by Linda No comments: