There's a saying - It's called "Fishing", not "Catching" because most of the time you go fishing you don't actually catch anything. Then, there are those rare days when it seems like every time you put your line in, you catch a fish so it really could be called catching.

After some time, Mom or Dad got into the action too and caught another eel. That'll show Junior.

All told, I watched Junior slurp down 4 eels in a matter of 15 minutes.

Then the Egrets got in on the action. This guy grabbed a fish but got his beak stuck. He struggled with it for quite some time before gulping it down.

Somehow, he managed to decapitate the fish in the process. Yuck.

And then, the real show began. A pair of Skimmers began making passes over the shallow pool. The light was great, the water was like glass. The birds dropped their bill into the water and whooshed by.

Their bill automatically snaps shut when they feel something in the water.  I guess their neck bends so that they don't crash if they hit something solid.

The birds would come up with a fish about 50% of the time but other times, they would be fooled into snapping up other things from the pond such as a feather.

When a fish was caught, it had no chance. The Skimmer's bill is like a vice.

You can see how narrow the bill is when you look head on.

The bird would fly around with the fish until it was in the right position to be swallowed - while the bird was still flying.  You can see the fish being tossed mid-air in this photo.

After about 30 minutes, the Skimmers were full and flew off. Harvey and I headed to the State Park to see if we could find the Avocet that had been reported over the past few days. We found the bird and what do you think it was doing. You guessed it, fishing. Here he is with his tiny fish prize.

Overall, the birds had a great day of fishing in Cape May. I kind of wished that I was fishing too.
Posted by Linda 3 comments:

We are in the midst of a heatwave here in Philly. The temperature has been above 90 degrees for over a week. I finally got out to the Villas beach today to look for banded shorebirds. High tide is best because the birds are close. There were hundreds of birds and hundreds of little black biting flies out today. The flies chased us off the beach quick. Undaunted, I returned with long pants and long sleeved shirt. The effort paid off with 2 banded birds. Good ol' L5V with his buddies: 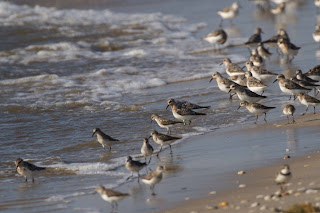 Here is a map of the places that L5V has been seen. Originally banded at Fortescue beach in May 2013. Reported a few times from Reeds beach and twice at Villas (by me). 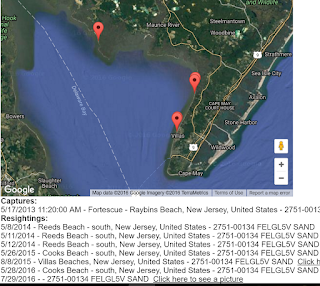 A newcomer to the beach - 13H. This bird was banded this past May exactly where I found him today. He was also reported at Fortescue beach in NJ on June 10th. Between June 10th and July 29th, this little bird flew to the arctic, found a mate, raised babies and flew back to Villas.

Hoping for more between now and November.
Posted by Linda No comments:

Well, our yearly hike didn't happen but we went to Potter County for July 4th with Connie's family. We had fun and got to visit with some of our favorite birds. Like this Blackburnian Warbler signing in the pine tree just outside the bathroom window. This photo was shot from the roof of the cabin.

And this Chestnut-sided Warbler hopping around the pine trees up the hill.

And our friend "Maggie", the Magnolia Warbler showing off his necklace up in the slate quarry.

And of course, the gang of Cedar Waxwings was hanging out. This poor guy has a few ticks hanging off of his black mask.
We saw a few Turkeys in the distance at the Elk viewing area - but alas, no Elks were around that day.

We did see some deer in our field. 2 bucks and a doe.

Of course, this is the time of year for baby birds. I found this one crying and hopping around behind on of the nearby camps. I'm still unsure of what species but I think it is Indigo Bunting.

Messing around behind the nearby camps almost got us in trouble when Peanut poked around under a bush at Frank's camp and found a Rattlesnake. Fortunately, the snake rattled and Peanut came away unscathed. We didn't hang around to see the snake. The rattle was enough for us.

Snakes aren't the only dangerous animals at the camp. Baby birds are also dangerous. Connie found out the hard way when a few baby Ruffed Grouse ran across the logging road in front of our motorcycles. I slowed down. Connie stopped suddenly and got a separated shoulder as a souvenir. OUCH. She's a tough broad though. She rode that motorcycle 10 miles back to camp one-handed.
Posted by Linda 2 comments: