I served 2 years as the Secretary of the DVOC. As of Jan 11, I am now the Vice President of the club. My duties have changed from taking the meeting minutes to scheduling the programs for the meetings. The thought of finding speakers for 18 presentations per year is overwhelming. While I love birding and know alot of other birders, I really don't know that many ornithologists. I panicked and started contacting people back in June as possible speakers. What a relief. I have 2018 fully booked.

The 2018 programs started with a tour of the Academy of Natural Sciences Ornithology Department and Specimen Tour presented by Dr. Jason Weckstein. Jason is a member of the club and full time associate professor at Drexel University (which now owns the museum) and associate curator of the bird collection. The meeting drew double the attendance as normal with over 40 people. Jason gave a short presentation and then he and his colleagues took us all up to the 4th floor to tour the specimen collection. We started with Harpie Eagle which is one of the largest and most sought after eagles in the world. This is Jason holding one up for the members to see. 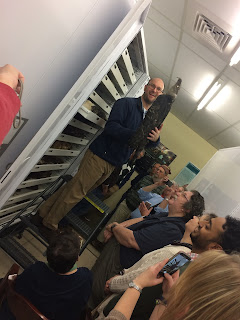 Here he is showing us Aplomado Falcon specimen. The 4th floor is full of cabinets like the one shown here. They are on tracks and can be moved to create aisles. 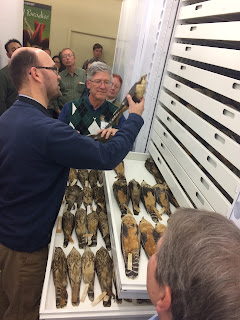 The highlight for many members was seeing extinct species skins. These are Carolina Parakeets which were once very common along the mid-Atlantic region. They went extinct years ago as settlers cleared the land and removed their habitat. Incredible to think of our area having parakeets. 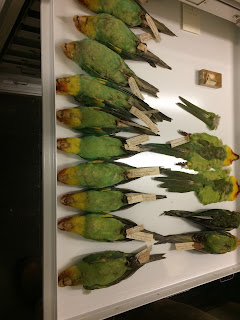 Jason pointed out that one of the parakeets was tagged by John James Audubon. Here is a photo showing his handwriting. Incredible to think that these birds were collected in the early 1800's and are still in good condition in the museum's collection.
Imperial Woodpeckers are, rather were huge birds found in the tropics. They remind us of Pileated Woodpeckers on steroids.

Their close cousin is the Ivory-billed Woodpecker. This is a species that has made the news in recent years. It was written off as extinct after 1946 however there are always reports from the deep bayous of Arkansas and Florida from someone who says that they heard or saw one. These stories have ornithologists launching massive searches resulting in even more questions about whether the species is still in existence. After a recent search, ornithologists asked the Academy if they could examine a wing from a specimen to compare to a very blurry video. Here is Jason showing us the famous wing. Do Ivory-bills exist? Probably not but wouldn't it be great if they did.

Anyway, the tour was a big hit. Here is hoping that the rest of the programs go off without a hitch.

Our search for Snowy Owls and other winter birds took Todd and I to Canada in December. I guess we could have saved some gas money by waiting for the Snowy Owls to come south. Marty and I went to the Philadelphia airport this morning to see this Snowy Owl which has been hanging around the UPS hangar for a few weeks. We found him/her sitting on a light pole.

A different angle shows that this location is in fact an airport. That's the radar tower behind the owl.

There is talk of capturing this owl, banding it and relocating it to the farmlands in Lancaster county. The last Snowy that tried to make the airport it's winter home was killed by a UPS plane on the runway. Runways are not safe for birds (or any living thing). The trouble is that the same bird that was killed was also captured, banded and relocated to Lancaster. It took him less than 2 days to return to the airport! So, why bother? I hope they leave the bird alone and let him/her take it's chances.

Marty and I headed up to Pennypack on the Delaware park in search of ducks. We found icebergs.

Some of them were grounded at low tide. It's less of an ice berg, than a big ice ball. It is accumulated ice slabs mixed with dirt and debris that froze together. Kind of neat looking.

We did find a few ducks. Here are Bufflehead amongst the ice flows.

Birding has been really slow lately. Hoping next weekend is better.
Posted by Linda 1 comment:

In between the Canadian cold and the winter storm, Connie and I drove to Florida for Christmas with my mother and her sister. The week was filled with cooking, eating, drinking and visiting. I brought my binoculars and camera but didn't expect to use them. Fortunately, Connie's sister lives in Cape Coral which has many vacant lots where houses hadn't been built for humans. Burrowing Owls love the lots. We found a corner lot with 7 burrows. Someone makes little wooden perches for them and puts stakes out to advise people that there are owls living there.

I went out late in the afternoon to try to photograph the owls. I drove to the corner lot and saw an owl sitting out next to the burrow. I quietly rolled the window down and turned off the engine. I snapped a few photos. The owl just sat there. 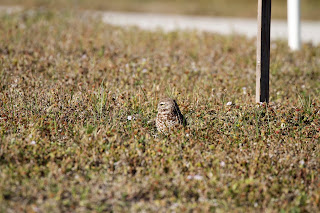 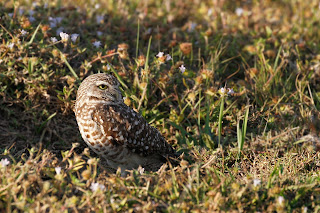 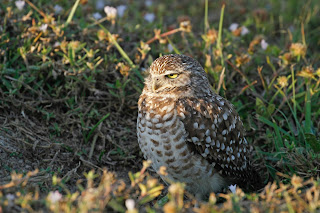 The owl was so un-phased by human activity that he even took time to preen.


And then, something happened. I stepped on what I think was a storm drain on the curb and next thing I know, another owl jumps out of his burrow (he hadn't been out before this) and starts flying around the intersection hooting and then landed on one of the perches. I snapped this photo of him as he landed. 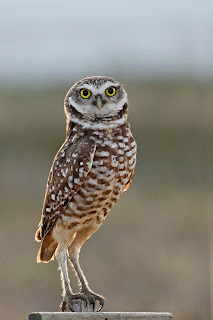 "My" owl hooted back a few times but still just sat there. And just like that, the mad owl vanished back into his burrow. I'm not quite sure what happened. Did I scare the owl? The only thing I can think of is that when I stepped on the storm drain, it echoed into the burrow and scared him. Or, something else made him take flight. I really don't know but I think it is weird that cars, joggers, skateboards and bicycles are ignored. Urban owls.
Posted by Linda 1 comment:

Circle of Life in the Snow Storm

Warning: this blog post shows animals acting like, well, animals. Since I have been working at home I have seen our neighborhood foxes often. Mostly in winter and spring and almost always when it snows. Today was no exception. We experienced another "snowicane" along the east coast today with snow and blowing wind. About 9:30, the fox wandered past the pond and around the back of the house. Connie was home today so I yelled for her to look out the kitchen window to see the fox. Poor Connie. She witnessed the fox grabbing a squirrel right by the neck.

The fox took the squirrel out back and had lunch. Watch if you want to. Don't watch if it upsets you. I thought it was interesting that the fox uses the snow as a napkin.


I don't usually post things like this but I have to tell you that after this, no squirrels were eating the birdseed. Only birds. It is soooo cold here that the birds really need to seed. (And the fox really needs the squirrel) Don't worry, the next post has pretty birds and fun stuff. Promise.
Posted by Linda 1 comment: