There's Cold and Then There's COLD

Before you say it, I know it was our choice to go to Canada in December so we get what we deserve. We we prepared for cold weather. The temperature was forecast to be between 5 and 25 degrees Fahrenheit. We had boots and hats and gloves and layers, layers, layers. We weren't prepared for this:

That's a - before the 20. 20 below zero Fahrenheit. That's fucking cold. It was that cold even when the sun came up. We didn't venture far from the car. We couldn't. Even with the mittens and hats and boots and hand warmers and toe warmers, it was cold.

We spent a lot of time at the Visitor's Center too - for 2 reasons. First the cold, but also because one of our target species often hangs out under the bird feeders there. This critter is called American Marten or Pine Marten. It is a type of weasel that can climb trees.

He would eat the bird seed on the ground and then run up to the building and hang out next to the foundation. We figured out that there is a little pipe there that he must use to get a drink. Cute little critter but make no mistake, this is a predator. Look at those teeth and claws. He could rip you up.

OK. One more photo just because. Look how cute he is with the snow on his nose!


It did warm up with temperatures above zero in the afternoon and the next day too. On our last day, we found an uncommon woodpecker on a hike. This aptly named woodpecker is Black-backed Woodpecker, a female.
Another fun thing to do in the park is photograph common and uncommon birds. Here is Todd bearing the cold to take a few photos of a Blue Jay.

Even the Blue Jays look better up here.


Up north, there is another type of Jay - Gray Jay. These are the same size as Blue Jays but somehow they look cuter.

They are really smart and figured out quickly that when people arrive, they get fed. Just put a little peanut butter on your finger and hold out your hand. Here is a photo of me feeding the jay that Todd took. You can see that the jay has bands on his legs. I think the park does this to keep track of them.

The Gray Jays aren't the only birds that figured out that people equals food. Here I am feeding a Chickadee.
Birds and wildlife up here have adapted to the cold and snow. We found this flock of Pine Siskins on the road eating grit and salt after the snow plows came through.

Sadly, some of them are not fast enough to get off of the road. We found 4 of them dead.

Their little bodies were still warm when I picked them up. They are now on their way to the Academy of Natural Sciences in Philadelphia for study. I didn't think about whether that was legal or not but they didn't ask me if I had any dead animals in the car when we crossed the border.
Posted by Linda 1 comment:

In the Ditch at Algonquin

Todd and I headed northwest to Algonquin Park in Ontario in search of winter birds and mammals. Once we entered the park's East Gate, we saw a big sign for Moose crossing. Of course, Todd wanted to get a photo for his sign collection. An easy task except that the side of the road was icy and sloped. Yup. We went into the ditch. Barely but that is all it took to get us hopelessly stuck. Todd isn't happy.

The ironic part is that Todd just finished telling me about how he got stuck in a ditch on his last trip to Algonquin when they spotted a moose on the side of the road. (a real moose, not just a sign)

Lucky for us this happened in Canada where everyone is sickeningly nice. A lady stopped right away and offered to go to the gas station outside the park and ask for a tow. About a dozen other cars stopped too. By the time the lady got back, another good samaritan with a big pickup truck was already pulling our car out of the ditch.

Success! I was really happy not to have to wait for a tow truck. (or pay for one) 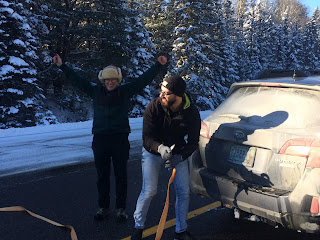 Here I am with both of the nice people who helped. The lady turned out to be a wildlife photographer too. The man was on his way to his daughter's house to celebrate early Christmas. Thanks to all who helped.

And off we went to explore Algonquin park. Only one road is open in winter which stretches east to west about 40 miles. We stopped in at the Visitor Center to ask about any wildlife sightings. We were rewarded with a few good birds like Purple Finch.

And this Evening Grosbeak. Such rich colors.


There are 2 types of crossills in the park - Red and White-winged. We heard and saw many of both species. Here is a shot of White-winged Crossbill that shows how the bill actually crosses. These birds use their bills to unlock seeds from pine cones.

Our hotel was on the west side of the park so we headed out after a long day. Oh, in case you were wondering, Todd did take a photo of the sign . . .

In the last post, you saw how many Snowy Owls are hanging out on Amherst Island. The island is known for owls and even has a place called "Owl Woods" where birders go to see owls in winter. Well, we drove down a very snow covered dirt road and found the woods. When we arrived, it was sunny. As soon as we got out of the car it started snowing sideways. Guess what we didn't find? Owls. Zero owls in Owl Woods. Busted. g

We thawed out in the car for a few minutes and headed back to the main road. By now, it was getting late and we hoped to see Short-eared Owls cruising the marshes and fields. Boy were we happy when we saw 2 "Shorties" flying together along the road just about the same speed as the car. And then 2 more joined them. They were all kind of chasing each other. 2 landed in a tree. Then, 2 more flew in. Then Todd yelled "stop the car!" He noticed one sitting on a post in someone's yard really close to the road. It was getting late and not great conditions for photographs but when you have a bird just sitting there . . . 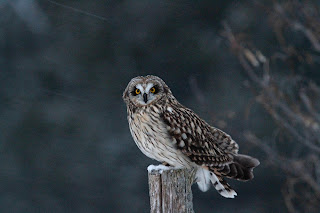 We set the ISO to 2500 and just started shooting and playing with the settings. Here he is looking down at something. Check out the snow blowing sideways! 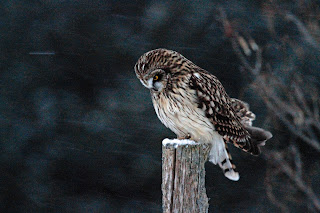 I backed up and put the bird in front of the sky for a different effect. The wind was whipping the bird's feathers up. 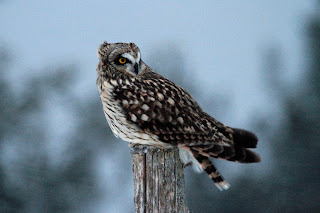 The funny thing is that Todd and I were talking about how hard it is to get a photograph of Shorties. They are usually down in the marsh or flying past you at dusk. Honestly, we couldn't stop taking photos of this bird. He just sat there and we just kept telling each other how we couldn't believe our luck. 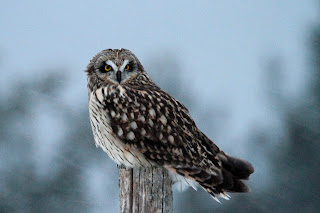 All in all we counted 7 Short-eared Owls and got to know one of them pretty well. It was a magnificent way to end a very long day.
Posted by Linda 1 comment:

Cold and Snowy in Canada

A quickly planned trip to Canada in winter? Sure. Why not. That was the gist of the phone call that I got from Todd while I was in Seattle last week. Now, we are freezing our asses off in Canada looking for winter birds and wildlife. This probably sound nuts to most people but it is a "normal" trip for birders. Our destinations are all in Ontario. We started on Amherst Island near Kingston.

Todd arrived at our house at 3 AM on Friday. We were well into upstate NY by the Canadian border by 8 AM but we had a problem - the windshield washer wasn't flowing. Big problem since we were driving through snow and salt and grime on Interstate 81. We found a service station near Ft. Drum NY. They figured out the issue and had us back on the road in about an hour. You should ask Connie to tell you what the issue was. Let's just say - I told her not to fill the washer tank with plain water and leave it at that. Even with the delay, we were on the ferry to the island before noon and had all afternoon to explore.

We found our first Snowy Owl about 1/4 mile from the ferry terminal and counted about a dozen over the next few hours. They were literally everywhere. The second owl that we found was sitting in a gnarly tree. 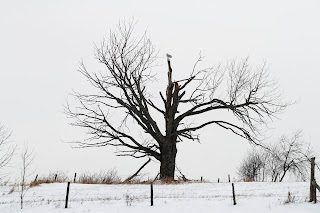 Then we found this one sitting on a fence post against a dark and stormy sky. 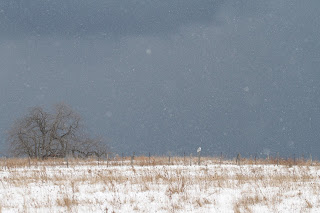 Just when we were thinking that all of the owls would be really far away, we spotted this one perched on a telephone pole a bit closer to the road. 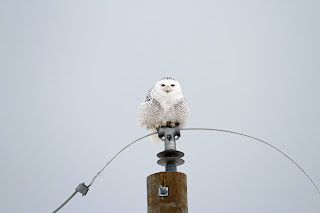 We watched this bird fly down into a farmer's property and snatch something from between the hay bails. He sat there proudly clutching his prize. 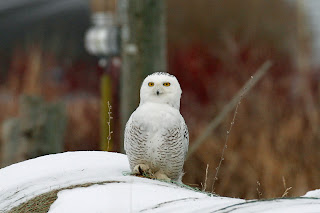 When suddenly, another Snowy Owl flew in and attacked him knocking him off of the hay bail! The interloper screamed like a mad man. 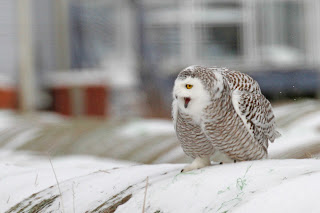 Finally driving off the owl that had the prey. You can see that the first owl no longer has anything in his talons. He flew off beyond the farm. 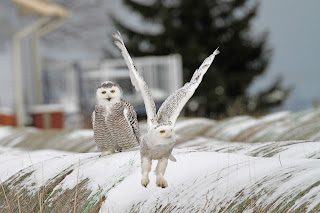 The interloper took up position on the telephone wire right in front of us. 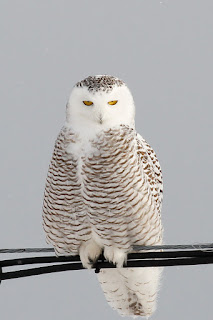 All of this happening with us in and out of the car and the farmer moving hay bails around the farm with John Deere tractors. Amazing!

What a crazy work trip last week. So busy with meetings in Seattle that I didn't think I would have even an hour to be outdoors. Luckily, my boss and I had an hour to kill on Monday afternoon and went out to Marymoor Park in Redmond WA just to get outside. As luck would have it, we met a couple on the trail that told us about a Red-breasted Sapsucker pecking away at a tree further down the path. Check! Life bird!

I've missed this relatively easy bird on many west coast trips in the past, but not this time. The bird was in no hurry to leave. Bad news is that I only brought my binoculars and not my camera. You can see how close we were though since I managed to get this cell phone photo.

I also had to head down to Portland OR to meet with some clients. The scenery was beautiful. Mountain ranges and big cedar trees all along the route. The weather was clear enough for me to see the major mountains (volcanos) that run along the Cascade mountain range. I saw Mount Rainier, Mount St. Helens and Mount Hood too. On my way back to Seattle on Thursday, I had a few hours of daylight so I decided to detour off the highway to see Mount St. Helens.

The Visitor Center has a gorgeous, but distant view of the volcano.

Getting a closer look requires an hour drive. I made it pretty far up but the park road is closed in winter.

Imagine back to 1979 before the volcano erupted. This mountain had a pointed top. But then unexpectedly, BOOM! A cataclysmic eruption blew the entire top of the mountain right off leaving it looking like this.

If you have the opportunity to see it, you should make the trip.
Posted by Linda 1 comment: