And Then Lori Said - "You Should Get a Machete"

So, another weekend of bad wind spells bad news for Lori and Tara since they really want to see some birds. We spent a few hours wandering around Higbee beach. Their dog took off after something in the woods.  I mildly told them that the dog was gone. They chased after him and eventually found him.  We still didn't see any birds. We went to the diner for breakfast to pass some time.

Then, we went to a new place in search of sparrows. I scoped out the place last week and got torn up by sticker bushes so I decided to bring a pair of pruning sheers with me to cut my way through the brush.  And then Lori said - "you should get a machete".  As luck would have it, we were driving past the North End Thrift Store at that exact moment so in we went.  Guess what?  They sell machetes at the thrift store. We got one for $12.  Here I am modeling the latest in machete wear. 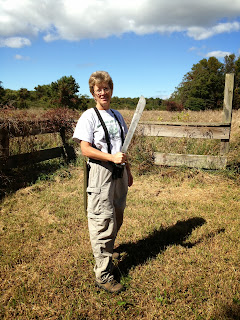 The machete wasn't very sharp. We should have assumed that any machete purchased at a thrift store in The Villas would not be sharp.  This is what happened to Barbara when she tried to cut through the sticker bushes - the sticker bush slapped her back!  We almost peed ourselves watching her swipe at the plant only to be slapped in the neck.  It's mearly a flesh wound. 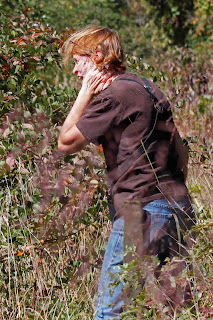 Despite the terrible birding conditions, I did manage to get some good photos.  The first 2 photos are of Widgeon.  There has been a rare Widgeon in Cape May for the last few years. This guy is a Eurasian Widgeon.  Notice the difference. The Eurasian bird has a reddish head while the American bird has a green eye patch with a yellow forehead.


Next up is a juvenile Black-crowned Night Heron that put on a show right next to the path at the State Park. Of course, he never came into the sun, but still good photo opp.

This was an amazing photo of a Merlin that screamed into view, landed and then took off again in about 30 seconds. I snapped this photo which is pretty good just before he took off.

Hopefully the winds will shift and bring Lori some warblers.
Posted by Linda 2 comments:

Email ThisBlogThis!Share to TwitterShare to FacebookShare to Pinterest
Labels: cape may, merlin, widgeon

Double Skimmer with a Side of Butterflies

As promised - here are a few photos of Black Skimmers from last weekend.  My one true fan has implored me not to post the gross ones so I'll skip those for this post.

I LOVE to photograph Skimmers. I take photos of them every time I see them. I can't stop myself.  It has something to do with the specialized bill.

They use that bill to find food. Basically, they fly along the water with the bottom of the bill in the water and hope that it hits something to eat, then they snap it shut.  Here is the "money shot" with 2 birds skimming together. Check out the wake they leave behind.

They skim along and then the reward - a fish!  Here is one of the birds with his prize and some seaweed too. Zoom in to see the fish up close.


And then there were butterflies. Lots of butterflies. I don't know anything about butterfly ID, so we made up our own names for most of them. This one is NOT a Monarch. It looks like a Monarch but it is smaller. It's called a Viceroy but we call it Cigarette.


More to come. I have alot of stories and photos to offload this week.  I'll warn you if I post the circle of life photo.
Posted by Linda 3 comments:

We've had company for the past several weekends.  Some good for birds and some not-so-good for birds.  First the not-so-good: my mother.  Definitely NOT good for birds. Definitely GOOD for us.  We had a ball on Ocean City boardwalk and at the casino which she can tell you all about.  Now for the birding company. Lori and Tara were down the shore with us this weekend.  Unfortunately, we had bad winds for migration so very few warblers.  We did get some good ones. Here are some quick photos. I'm exhausted.

This is the one of the strangest things I've seen - it's a Falcon and a Woodpecker perched on the same dead tree.  The falcon is a Merlin which eats other birds for a living.  The woodpecker is a Flicker which I have seen (and reported here) being eaten by a falcon.  Weird.

Another photo of Stilt Sandpiper. I can't help posting them.

Here is a tree frog sitting between signs at the Cape May State Park. One of the super nice volunteers pointed it out to us.
The best bird of the weekend for me was the Clay-colored Sparrow that Lori, Tara and I found this morning at Higbee beach. It's an unusual bird to begin with but it is a "good" bird because we actually found it and identified it for ourselves rather than being told about it by someone else.  Yay for us. It is also a "good" bird because it didn't fly away or hide. It was completely comfortable being 8 feet away from the 3 of us and 2 dogs too.  Good bird! You are getting 3 photos to celebrate.


I have way more photos to post.  I'm holding back the double Skimmer photos, some gross "circle of life" shots and tons of butterfly shots to post later this week.

Our latest pelagic trip left Wildwood Crest on Friday night. What a difference from the last trip. The seas were calm and we saw a good number of birds and other sea life. Our first treat was to witness the LADEE rocket which launched from Virginia at 11:27 PM.  The entire horizon lit up and then we watched the rocket climb, climb, climb until it went out of sight.  That was really cool.

After a restless night sleep on the top deck of the 95' Atlantic Star, we had a beautiful sunrise and 3 species of storm-petrals - Wilson's which you have read about in previous posts, Leach's, and Band-rumped.  We also saw a few Shearwaters which we have seen on other trips too.  The best bird of the morning was a Pomarine Jaeger that circled the boat a few times. This is a big bird which makes it's living stealing meals from gulls and terns. The ID on this bird is that it has long tail feathers coming out of the center of the tail. You can see that on this photo of the bird trying to land on the water.


You can also see the long tail feathers on this photo of the bird flying past the top deck of the boat.  They just look menacing don't they?

Here is a Pilot Whale which are actually just really large dolphins and not true whales. You can ID these by the black color and bulbous head.
Striped Dolphin are pretty rare - so says our trip leader. We saw a pod of about 30 or more.
Back to birds with another Jaeger. This one is Long-tailed Jaeger which was a life bird for me. This is a juvenile which doesn't have a long tail yet. This guy hung around for awhile before flying off.

The most unexpected bird of the day was this Bridled Tern - a southern species. This bird found a floating piece of wood to rest on. It didn't seem to mind the big boat riding past either.

The weirdest sight of the day was this Ocean Sunfish or Mola Mola which hung around the boat for awhile. This fish is shaped really funny with 2 big flippers, practically no tail and a face that looks human. The fish is really big - about the size of a Lazyboy recliner - and weighs about 600 pounds. Click on the photo for a larger view to see what I mean about the face.

Here it is looking up at me from beneath the water. It freaked me out a little bit.

The other fish of the day was the 30 pound Yellowfin Tuna which was caught by one of the leaders. I don't have a photo that I want to share of that. Suffice it to say that there was sushi served :-(

We returned to the dock at 5:15 PM on Sat with a bunch of new species to add to the stupid contest list, some funny stories and an image of Mola Mola staring at me. By 5:30 half the people from the boat were all in our cars and off to chase another bird for the contest - Lark Sparrow which was seen by all.

Part of the fun of these trips is meeting new people and seeing them on subsequent trips. By the time the boat pulls into the dock, you feel like you had a shared life experience with the other participants. You even feel like you can invite them to dinner or to stay as a guest in your house, which is exactly what happened.  I ended up with 3 guests which was great.


Boy was it ever a slow migration weekend in Cape May.  The winds could not have been worse for kicking off “fall”. Birds depend on winds blowing from the North West in fall so that they can fly South easier. This weekend, the winds were either blowing from the South or not blowing at all. Saturday was pretty much a bust.  The guy who is officially doing the bird count at Higbee was standing on the dike all by himself most of the weekend. All of the experts knew better than to waste their time.  Not me. I went out at 0 dark 30 anyway.  My Jersey Big Year buddies Lester and John (you may remember them from Princeton - click here to re-read that post) showed up and we all went for a walk around the fields and woods. We didn't see many birds but we did find a new trail.

Today, I was lucky enough to be up on the dike at precisely the right moment and under precisely the right circumstances to see a Western Kingbird fly past.  A few birders from Sweden were there getting their first good looks at Eastern Kingbird when a different bird flew directly overhead which brought a lot of discussion and learning opportunities.  Sam got a few photos that confirmed the suspicion – Western Kingbird. The bird dove down and out of sight.  After about an hour of scouring the fields, I was joined by Harvey and the bird reappeared overhead. Coincidence? I think not.  We were also fortunate enough to call it out for another group to get a glimpse before it disappeared over the tree line. Don't laugh at this photo. The other guys didn't get much better!

Another good bird seen from the dike this morning was a pair of Kingfishers that flew past and circled back around. This one is a female which is told by having 2 stripes on the breast. The top stripe is blue and the bottom stripe is brown. I caught a pretty good shot of her.

Here are a few herons that caught my eye this week. The first is an immature Little Blue Heron.  That's right, I typed "blue".  They start out white as juveniles, then molt into blue as they get to breeding age. This one was itchy.

Here is a Green Heron at Tinicum earlier in the week. This bird flew right up to the railing about 20 feet away from me and strutted around. That is weird. I love this pose too. What a goof ball.