Let's start this post out with a Ruby-throated Hummingbird nest. Harvey found this nest in Belleplain State Park while looking for another bird. Here is the female sitting in the nest.


The bird that Harvey was looking for was this Kentucky Warbler. We heard the bird singing along Pine Swamp Road a few times. I went back to the spot to see if I could get a photo and was really pleased to get a few.


Another bird that we often here singing in Belleplain is Prothonotary Warbler. There is a place in the woods that has a post in the middle of the creek. I've waited and waited for the bird to perch on that post for years. It happened last week for about 3 seconds. I managed to get this photo.

Another bird that usually doesn't pose is the Brown Thrasher. Drew and I scared up a couple who were nesting in a shrub near the visitor center in Virginia. They both popped out of the bush squawking at us.

Back on the beach, I was doing my volunteer duty watching the shorebirds and snapped this photo of a Common Grackle walking along in the wind. The wind was blowing so hard, the bird couldn't keep his tail down.

Overhead, this Osprey came back ashore with a fish. He flew right over my head with his catch of Menhaden.

I was just happy to have a few birds to photograph recently.
Posted by Linda 1 comment:

I haven't put as much effort into birding this spring as in previous years. A mix of weather, home projects and family obligations have made it a bit difficult to get out there for photos and stories. When I have been out, the birds are not quite posing either. Thankfully, the reptiles are giving me something to photograph. Here are a few starting with a baby Box Turtle crossing the path:

And this Fowler's Toad sitting in the sand path in Cape May.

Drew and I found this American Toad down in Massanutten Virginia.

And (Warning - adult content below) these Fence Lizards making more little lizards at the summit of Kaylor's Knob in Virginia.

Another lizard posed for me too. This is a Five-lined Skink. I love his orange head. Some of them also have a blue tail. 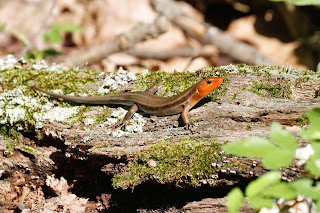 Good thing these creatures are content to sit still! Hoping to find some birds to photograph soon!
Posted by Linda 1 comment:

After many years of not competing in the New Jersey World Series of Birding contest, I was roped into participating this year. In years past, our little gang of women birders have participated in the contest but only in Cape May county. You may remember this post: https://www.phillybirdnerd.net/2014/05/world-series-2014-new-high.html

This year, a fellow DVOC club member and friend asked if I would participate on the 1,000 Birds team to do a full state run. Why not? The team consists of Ken Walsh, Marc Chelemer and a few other guys that couldn't make it this year so they filled in with me, Harvey and Nicole Koeltzow. Marc, Ken and Harvey are all birding friends. You may remember Nicole from my trip to St. Paul Island in Alaska last September. She did a big year and won with 774 birds. We helped her get  #750 White-tailed Sea Eagle and a few others. You might remember this post: https://www.phillybirdnerd.net/2018/09/birds-of-st-paul.html Nicole is pictured in the Sea Eagle photo.

Doing the full state competition is really tough. You start up north in the Great Swamp at midnight and bird all night and day and end up in the south at Stipson's Island marsh at 10 PM or later. We put hundreds of miles on Harvey's mini van and counted 180 bird species in total. Don't confuse this contest with "birding". It isn't birding. It is identifying and checking off bird species. We rarely stopped to look at any birds. We mainly listened for their call or caught a glimpse of them before moving on to our next target and destination.

Our first bird was Great-horned Owl at midnight sitting atop a dead tree in the great swamp. We could see the silhouette against the night sky. We heard many other marsh birds including Virginia Rail, Least Bittern, Solitary Sandpiper ( a shorebird that happened to call out in the night ), Woodcock and then heard a King Rail which is an uncommon bird. We traveled to various marshy destinations until sunrise. My best bird of the night was Eastern Screech Owl which I called in by imitating its "whinny call". I whinnied and it whinnied back! Check. Let's move on.

Honestly, the morning was a blur of stopping at this lake or in these woods listening for birds. I was driving the van. Ken was navigating. Turn left, turn right, go straight, STOP! I had no idea where we were but Ken and Marc had the route planned out to the minute. We did a pretty good job of staying on time until the afternoon.

Another of my best birds of the day was Common Raven. We drove up to the highest point in NJ to look for them at the nest site on the AT&T cell tower but they were not there. We stopped at a parking area at the bottom of the mountain where the road crew has piles of stone stored. We were looking for warblers but didn't see any. I had to pee so I ducked behind one of the stone piles. Everyone else did the same. With my pants down, I spotted 2 Ravens soaring overhead and yelled out to the others. All 4 of us got the Raven with our pants down! Check. Let's move on.

You'll notice the lack of photos in this post. There is no time for photos when you are in the competition. I did manage to get a shot of another bird that I found - White-crowned Sparrow.

We ended the day with 180 species and came in 2nd place. We got a trophy. That's me on the left, then Nicole, Ken, Eric Stiles and David LaPuma from NJ Audubon who presented the trophy. 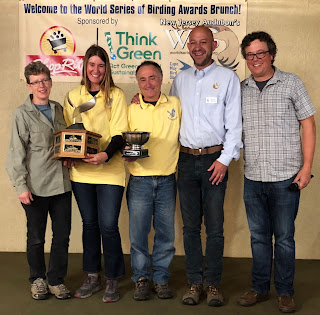 The first place team had 207 species. That team is made up of Cornell University Ornithology majors and they win every year. Maybe next year we'll break the 200 mark.

We are raising money for the DVOC Interns Fund. If you are inclined to donate, here is a link:
http://dvoc.org/Committees/Interns/Interns.htm Please enter 1,000 Birds in the comment section. Or, send me a check.