A Break from Travel

Over the past 2 years I have been traveling occasionally for work. You have read about some of the trips including California here in the US and England, Scotland and Wales as well as Singapore and Malaysia. Those trips involved a lot of planning and allowed for some extra time for birding. This round of work trips involves one day here and one day there. Mostly on the east coast so it doesn't make sense to stay overnight and the timing is terrible for birding anyway. Chicago and Dallas, New York, Boston and Washington DC in November is not what I would call begging for birding.

I have been traveling so often that I signed up for TSA Pre-Check so that I can keep my shoes on and put my laptop through the X-RAY without taking it out of the bag. You would think that people with this designation are savvy travelers who know the rules. Well, not always. I was in Lexington Kentucky the week of the Breeder's Cup for 2 nights. Just enough time to find a few bottles of Bourbon for gifts. I don't drink the stuff myself but I have friends who do. I spent $200 on 3 bottles of Bourbon that you can only buy in Kentucky. I dutifully packed the fragile bottles in my carry-on luggage so that they would be delivered in tact.

Off I went to the TSA Pre-Check security checkpoint where the agent asked if I had any liquids in my bags. Why, yes. Yes I did have liquids in my bag so I proceeded to take the bottles out one at a time and place them into the bin to be put through the X-RAY. The female TSA agent that was working the machine asked if I knew about the 3 ounce liquid rule. Why yes. Yes I did know about the rule. That's why I took the bottles out of my bag. Duh, did she think I was stupid? Why yes. Yes she did think I was stupid and with good reason. You see, 3 ounces is much smaller than the 3, count em' three 750 ml bottles of Bourbon that were going through the X-RAY. What a moron. They promptly escorted me out of security and back to the ticket counter where I had to put the bottles into checked luggage and hope for the best. I don't know what I was thinking. I had it in my mind that the 3 ounce rule applied only to toothpaste and shampoo. I'm an idiot.

This idiot caught a break over the weekend and seized the day with Harvey to go birding along upper Delaware Bay. The New Jersey birding community was a buzz with reports of Franklin's Gulls on Friday but I was in Boston and by Sunday I was still tired and interested more in spending a relaxing day with Harvey and Peanut birding to see what we could see rather than chasing a seagull.  We started at East Point Lighthouse and did really well while exploring the road and trails. Peanut flushed a Pheasant which was unexpected. We ended up with 40 species in 2 hours.

No photos from that spot but we did manage to snap a few when we got to our second stop - Heislerville. This is a Wildlife Management Area with a few bid water impoundments. We found shorebirds including this flock of Dunlin. Look hard and you will find a single Black-bellied Plover flying with the group.

We also found 2 Western Willets in the water. All of "our" Willets which we call Eastern Willets are gone by October. Western Willets show up occassionally on their way to Florida for the winter. This one was picking the legs off of a crab.


On our way back to the parking area we drove past a plowed field and scanned for birds. We spotted about 30 American Pipits. Can you see 2 of them in this photo? They blend in really well.

The most unexpected thing that we found was a butterfly in November. This is Variegated Frittalary.

You'll have to ask me about what else happened. I dare not put it in writing.

Di and Her Eagles

Di had a pretty good weekend. She completed her second half-marathon on Saturday morning AND she made a great time - crossing that finish line in under 2 hours and 45 minutes. I walked along with her for 8 of the 13.1 miles for "support".

Today, I recuperated by sitting in a car with Harvey while driving around Brigantine looking for birds but mostly struck out. I headed back up the AC Expressway at noon, over the Walt Whitman Bridge and onto the Schuylkill (this becomes significant soon) so that I could get back home to caulk the tub - oh joy.  I was just about at 30th St when Di texted me this - "That blob is a bald eagle. Gazebo at Lemon Hill" along with this photo:

That photo is taken with an iPhone so imagine how close Di had to be to the eagle.  This is the second time that Di has sent me an iPhone photo of an eagle at Lemon Hill. The first was a few years ago. She is so lucky. I walk the dog here almost every day for 8 years and have only seen 2 eagles - flying over the river, never perched.

I told you that 30th St would become significant. You can see, Lemon Hill from the Schuylkill Expressway. It is above the boat houses which are about 1/2 mile past 30th St. I was sitting still in traffic at the time but started to move again so I texted back - "so is this" along with this photo: 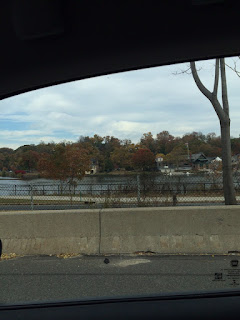 You can see the Eagle if you look really hard at the tops of the trees.  Don't worry, the traffic was moving so slowly that there was no danger. I didn't look at the phone, I just held my thumb on the shutter button and snapped about 8 photos.

Of course, I had to get a better look. I have been hoping for this situation for years - a photo of a Bald Eagle in the city. It only took me 5 minutes to exit the Schuylkill at Girard and make my way to the gazebo at Lemon Hill where I found Di, Barbara and Sammy waiting for me. I snuck up to the gazebo with my Canon 7D with 400mm lens and snapped about a billion photos. The lighting was terrible but I managed to get a few good ones including this head shot.

Check out the dark pigment spot on the eagle's eye. It is supposed to be all pale yellow. Cool.  The holy grail of photos still eludes me - a photo of an eagle with the city sky line in the background. Some day, some day.

Congrats to Di for a stellar weekend.