Getting Attached to the Dog(s)

Memorial Day Weekend is spent up at the cabin with Connie's family. We have been doing it for a few years now so that we can spend the weekend with her Mom, Dad and sister. This year we brought the new dog, Roxy with us. She is really getting attached to me. She follows me everywhere. In and out of the cabin, around the property, and along the trail. She has proven to be a great birding dog already. She stops when we stop and stays around while we listen and look at birds along the trail. This trip really awakened Roxy's nose. It is obvious that this was her first trip to the country. Here is a photo of our new girl: 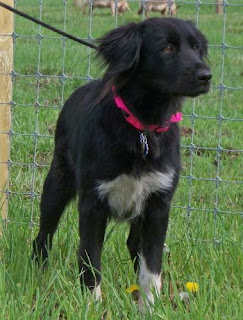 I got attached to another dog this weekend too. Roxy and I were walking along the new clear cut in the pines on the property when she suddenly disappeared. She was right behind me one minute, and gone the next minute. I thought she might be down at the camps along the dirt road, so I went down to look for her. A woman in one of the camps yelled out of her screen porch that she saw Roxy running in the woods. So I started walking down the dirt road in that direction when all of a sudden a boxer came charging out of the camp and ran down the road after me. He bit me on the hand, then bit me again in the back of the calf: 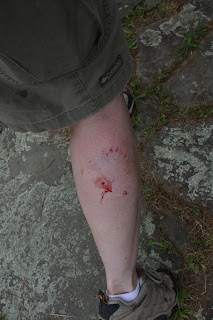 Blood really ran out of the bottom puncture wound. It gave me Curt Schilling sock and sneaker (you need to be a Phillies fan to get that). It hurt, but I'm fine.

Anyway, back to the birding report. We put up a Bluebird box last summer and viola, we have nesting Bluebirds in the field - with a baby inside. Part of the roof was blown off when we arrived, so I pushed it back into place and got to see the baby. We watched the parents bringing big bugs all weekend. Here is pop on top and mom at the entrance hole. 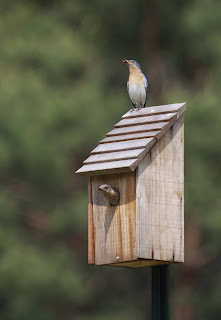 We also had a singing male Blackburnian Warbler hanging around in the pines next to the cabin all weekend. He is obviously setting up his territory. Really pretty orange throat which is shown in the photo: 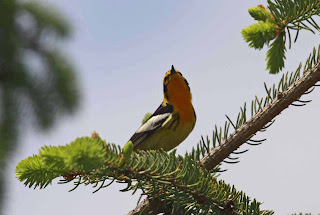 We had at least 6 separate Chestnut-sided Warblers singing at the stream this weekend. Connie and I discovered a few last year and managed to remember their song this year. We also saw real Purple Finches. The male is really purple all over. Not like the House Finches that we used to call Purple Finches as kids. This is a really bad photo but it shows the purple coloring all over: 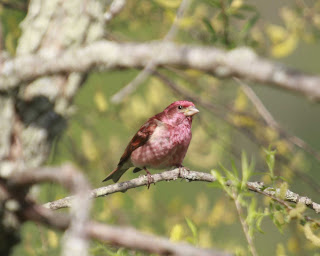 Bust. Trust me. We took the Bounder to Cape May on Friday - supposedly the best weekend of spring for migrants. Cape May Observatory even scheduled their "Spring Weekend" for the same weekend. I feel bad for them. Hundreds of people at our usual spots wearing weekend tags, following leaders, seeing basically nothing but mosquitos.

Diane and I drove the Bounder, Barbara drove her truck, Lori and Tara drove the "Schmellow". We all departed from separate points and ended up 3 in a row at the end of Route 55. What a coincidence. We stopped at Belleplain State Forest on our way down.

Oh, did I tell you about our new dog Roxy? She's a half pint Cocoa look-alike - but we didn't really plan it that way. We got her from a horse rescue in Quakertown called Last Chance Ranch. They got her from the Philadelphia Animal Control Shelter (PACS) where she was scheduled to be euthanized in 2 days because they didn't have space for all of the dogs. Sad. But, this isn't a dog blog. She did pretty good on her first birding trip.

Belleplain was not very good but we did get Ovenbird "teacher, teacher, TEACHER, TEACHER!" And Least Flycatcher "chePEEK". And Acadian Flycatcher "pyew". And a water snake.

After we parked the Bounder at the Depot Travel Park, we headed out to Higbee Beach. Tons of mosquitos, Prairie Warblers and Spring Weekend people. Tons of people. We walked the fields without much luck then we hit a little hotspot of Northern Parulas, a Black-throated Blue Warbler, Blackpoll Warbler and Red and White-eyed Vireos. Then it was over. We also saw the most evil looking orange turtle with evil red eyes along the path.

We also went to Cape May Point State Park (we call it the lighthouse) and the Villas WMA. Also busts except for Red-headed Woodpecker which was a life bird for Lori and Tara, and Blue Grosbeaks (M & F) which were lifebirds for Di.

And then it started to rain! It rained all day on Sunday so we packed up and came home early again.
Posted by Linda 1 comment:

Cold Ride into Work This Morning

I took the Yamaha TW200 into work this morning. Boy, it was colder than I thought. I froze my you-know-whats off. Arrived at Lemon Hill by 7:00 and was treated to amazing warblers:

Be sure to view this post on the real blog page and click on the names of the birds above to see more about each bird.

Thank goodness Barbara arrived and got to see the Bay-breasted and the Magnolia warblers.
Posted by Linda No comments:

We Won't See Anything at Lake Galena

This is what Lori told me Saturday morning when I arrived at her house. I was already up and out at PennyPack when she called me. I texted her at 6:30 AM and didn't get a reply, so I went to PennyPack by myself. It didn't look promising. Overcast and no birds to speak of at the parking area. Then I got the call that they were up and ready to go somewhere.

Bald Eagle - yes a Bald Eagle soaring over the lake. Oh, and an Osprey, and 0ver 30 Cormorants, and Gnatcatchers making a nest, and a Northern Waterthrush - with a pretty buff breast, and a Yellow-billed Cuckoo - yes an actual Cuckoo - cooing, and Prairie Warbler, Blue-winged Warbler, Yellow Warbler, Common Yellowthroat, a Chat and 40 other species of birds. It took us over 4 hours to get through the walk. It was incredible. Oh, and freaky spawning Carp. Huge swirling carp half out of the water thrashing around to top it all off. Total of 51 species.

Yeah, we'll never see anything at Lake Galena - and Lori will never live that down.
Posted by Linda 1 comment:

Well, it finally cleared up last night after 9 straight days of rain. We might as well be in Seattle. It cleared up around 5:00 PM and I took the opportunity to dash out to PennyPack Trust for a quick walk. Wow. The trees at the parking area were dripping with Yellow-rump Warblers. I also got a long look at a Magnolia Warbler low in a tree. What a pretty bird. Very distinguished looking (click the link to see a photo). I also got a look at a Swainson's Thrush. I knew it was different and another man helped me identify it. Heard Wood Thrushes and Veeries too. Beautiful sounds of spring. Other birds included the resident gobbling Turkeys, male Scarlet Tanager, and Bluebirds.

I didn't make it far on my walk this morning since I hit another hot spot at Lemon Hill. I saw at least 6 Baltimore Orioles - some chasing each other around. I heard and saw a Norther Parula and American Redstarts too, a Ruby-throated Hummingbird, female Scarlet Tanager, 2 Eastern Kingbirds and my first Black and White Warbler of the season.

That's all for now. More to come this weekend. Remember, it's the World Series of Birding this weekend, so follow Cornell Lab's team on Twitter if you want to keep posted on what they see and when. It should be exciting.

I'm wondering if it can get any worse. My last post was Wed April 29th about how crazy the last few weeks have been. I thought that it would calm down a little - then my Dad passed away on Friday. He has been suffering for a long time with MS and recently needed long term care and was in and out of the hospital with respiratory issues. This time he just didn't make it. I'm not one for the "he's in a better place" but at least he's not suffering in the nursing home anymore.

On to the birding part of the blog. That's right. My sister and I had pre-arranged my father's cremation and services a few weeks ago, so there were only a few things to take care of on Friday. We (the PhillyBirdNerd gang) had already planned to go to Cape May for the weekend. So we went. It was better than sitting around the house wondering what to do. We took the Bounder (our new RV) on it's maiden voyage to check out the systems and see what we would need to fix it up for our comfort. Connie couldn't go, so it was just me, Di and Barbara.

We arrived at the campground at midnight after leaving the Phillies game in the 7th inning. Don't think we have ice in our vains - it was against the Mets - how could we not go to that game. We were up at 7:00 AM and off to Higbee Beach in overcast 100% humidity weather. Boy, do the mosquitos thrive in those conditions!

You go to Higbee Beach in May for the warblers and other migrant songbirds. This is the place to see them in the early morning because they migrate at night and usually dive into the first land that they see after crossing the Delaware Bay - which is Higbee beach. Hardly any birds were around on Sat morning. I guess the overnight rain kept them from crossing the bay.

We did get great looks at Prairie Warblers right on the path and our first Northern Parula of the year. Also got vireos, kinglets and gnatcatchers along with an oriole and Eastern Kingbird. But the mosquitos became unbearable so we headed back to camp and worked for the rest of the day.

Sunday morning was worse at Higbee. Not a bird in sight and more mosquitos than Central America (I mean all countries combined) so we ran away quick and decided to try the Villas Wildlife Management Area. We have never been there before, but Karl Lukens and other Cape May Bird Observatory bloggers post about it often. We found it easily off of Bayshore Rd. It's nice because it allows dogs on leash (as does Higbee) and has an open landscape. Something seemed weird about the landscape and then we realized that we were walking through a defunct golf course. In fact, the "paths" were actually golf cart paths. What a great idea for an old golf course. Keep the trees and open space rather than turning it into another housing development.

My sister and I didn't really spend the weekend dwelling on my father's death that much. It's really not like us. We had spent the past few months taking care of him and we didn't really talk about that. But we did talk about things that our Dad did with and for us when we were kids. One of those things was to take us to Hawk Mountain in the fall. The memory of those trips is what really launched our passion for birding. In fact, we decided to direct any "in leiu of flowers" donations to Hawk Mountain in his memory. We didn't feel guilty today when we were listening to the Great Horned Owl hooting in the middle of the day, or yesterday when we spooked a really big raptor out of the woods, or when we were at the Phillies game making fun of the cartoon clapping hands on the jumbo-tron. It's what Daddy would have wanted. . .
Posted by Linda No comments: