Now that you are introduced to St. Paul Island, I can tell you about the birds. Our guides keep tabs on birds every day so they know about all of the "common" birds and know how to track down vagrants. We were taken to see the common birds on the island including shorebirds that I was really interested in seeing. First up - Rock Sandpiper. This bird is like our Purple Sandpiper. Very common along the Alaskan coast. 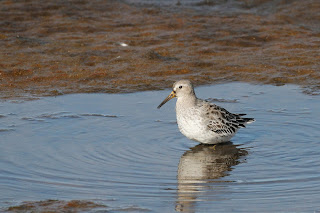 Next up - Gray-tailed Tattler. This bird looks almost exactly like Wandering Tattler so we needed to hear it call to confirm the ID. We also had the luxury of studying both birds on the same log. The Gray-tailed is on the left. Wandering on the right. 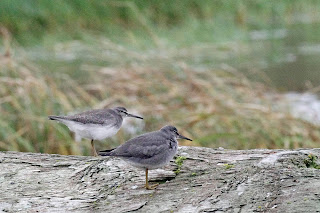 Of all the shorebirds, Sharp-tailed Sandpiper was one that I really wanted to see. We saw 6 of them a few days in a row but finally got close enough for a photo on the last day. You can see the sharp tail in this pose. 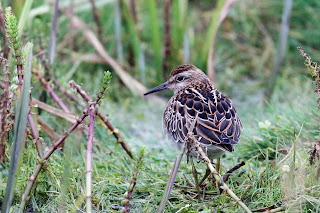 The island has hosted a White-tailed Sea Eagle for a few months. This juvenile eagle should be in Russia or Europe. In fact, I saw one in Poland a few years ago. The bird is larger than our Bald Eagle and likes to hang around the cliffs along the coast. We looked for the bird everyday. It shouldn't be difficult since it was the only eagle around. We finally saw the bird soaring over fields and headed to the coast. Four other birders were on the island specifically to see this bird and this bird only. They were all in the other van and didn't see the bird. We really wanted the others to see the bird so we decided to hike up the cliffs to see if the eagle was on the cliff face. The eagle lifted off from the cliff. It was huge. The ID on the bird is the white back which can be seen in this photo. Everyone got a great look.

Lots of high-fives and celebration beer ensued after we saw this bird. 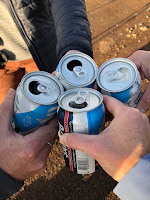 Other common birds on the island include Gray-crowned Rosy-finch. These birds like rock piles and are like our House Sparrows. They were all molting so really hideous to look at.

Birds in the fields were mostly Lapland Longspurs and Snow Buntings.


There are not many mammals on the island. The most common (other than the Fur Seals) were Arctic Foxes. We saw them literally everywhere we went.

They were in the grass.

On the jetty in the harbor.

In the parking lot along the salt flats.

More along the rocks. They are very comfortable around people as you can see here.

And even on the beach. These foxes do not turn white like their cousins on the mainland. They keep their dark coats all year since the island doesn't get snow that stays all winter.

We found a lot of signs of past lives on our hikes. Here is a Fur Seal skull.

I found this whale vertebra close to the coast. Yes, it was heavy.

We found this grave site at the high point on Northeast Point. It has been here since 1895 alone on the hill.
We found other markers on the island too. These Orthodox crosses were posted in odd places.

I found that if I looked at them from a particular angle, they actually formed a line that pointed to a chapel (seen in the distance in the photo) or the to the main Russian Orthodox church in town. Funny that most of the native Alaskans identify as Orthodox Catholics due to the Russian influence. The native Alaskans also use markers from their own culture to mark significant sites. Here is a photo of me and Marty inside the jawbones of a Bowhead whale. The bones probably mark a good fishing or hunting site. We found good birds and came back to the site a few times.

Some of my different pursuits embody ukulele, images, productivity hacks, and minimalism. Unlike the HALOT-ONE, the pro model of the printer is supplied with twin z-axis linear rails that give the printer additional stability and Midi Sweater Dresses layer accuracy. Creality’s first resin slicer Creality Box can give you a easy and easy slicing experience, but different software options are available including ChiTuBox and Lychee.