The Salmon hatchery is an interesting operation. Basically, the hatchery fools the fish into thinking that they are going into a stream to spawn (which is the fish's life goal) but they are really going into a holding pen where they are shocked and sent up a conveyor belt for processing.
You can see the holding pen and conveyor belt here. Oh, and one of the black bears that pluck fish out of the pen too.
I feel bad for the fish but when you think about it, the fish basically end up with the same fate as if they actually spawned because they die afterward anyway. The conveyor belt drops the fish in the processing shed where workers cut the female fish open. The roe pours into a bucket and the dead fish are sent sliding down a shoot into a waiting boat for processing into dog food. The males are just sent down the shoot.
The eggs are sent to the incubation room where they are tended in a dark warehouse for a few months. The incubation warehouse has stacks and stacks of shelves with water running over them. Each shelf holds 60,000 eggs and there were hundreds of shelves in the warehouse. You can see the pink eggs in the photo.

We worked really hard to get the new computers and wireless network set up for the staff. The hatchery site is comprised of multiple buildings that needed to be set up. Omar planned out the use of point to point wireless system to connect all of the buildings without digging a trench for the wire. Believe it or not, I ended up on the lift truck! 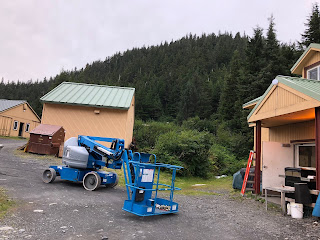 Here is a photo of me and the maintenance man Nick up on the lift installing the wireless "Lightbeam" unit.
This is the view from the top of the incubation warehouse. Yikes! (Yes, that's another bear on the grass)
We stayed in the bunkhouse in shared rooms with the staff and were served 3 meals per day all prepared by Chef Manny from the Phillipines.

Beef Bourguignon!
Meanwhile, lots of life and death action outside between the salmon and the predators. The salmon are thick and easy prey for the bear once they get into the holding pond. We saw 4 different bears during our stay. The staff know all of them individually.

The bears are really nothing to worry about. They are only going after the dead fish along the shore. On the other hand, the real predators are the Stellar's Sea Lions. These are massive creatures that can weigh up to 2500 pounds and be up to 11 feet long. I watched a group of them methodically work the salmon run for about an hour. I positioned myself on the dock and snapped about hundred photos as they surfaced along the outer edge of the salmon. Here are 2 of them with fish.

Here is a video of them patrolling the water. Look at all of the salmon in the foreground.


They would grab a fish and toss it into the air. I didn't realize how precise this action was until I caught a few with my camera. I realize that each Sea Lion would grab the fish by the head and bite it off as they tossed the fish in the air. This action would release the roe which you can see in the photos below. That's not blood, it's eggs.

The Sea Lion knows exactly where to bite the fish to get the eggs to pour out. Zoom in and look at all of the individual eggs being sprayed.

The gulls would swoop in and pick the eggs out of the water.

I'm not going to lie, I was a little nervous on that dock by myself with those monsters in the water nearby. Good thing I don't look like a salmon.

Back to work after a short break. We worked until 11 PM every day to get the work done but glad to spend a few minutes learning about the operation and watching the predator/prey dance unfold.
Posted by Linda