Hi there. If you are a true birdwatcher, you know that June/July are the duldrums. Spring migration is over, nesting is just about wrapped up, and fall migration hasn't begun yet. Most of the professional birdwatchers actually take this time for their vacations since nothing interesting is happening.

Life is not dull for me and Connie. We go to the cabin in Potter County every year over July 4th holiday. We had a good list of birds seen around the cabin again this year including 2 Pileated Woodpeckers that put on a show for us, Yellow-bellied Sapsuckers sunning themselves, and plenty of warblers that included our 2nd-ever Mourning Warbler. Here is a pretty cool photo of the Sapsucker: 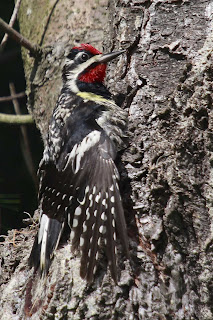 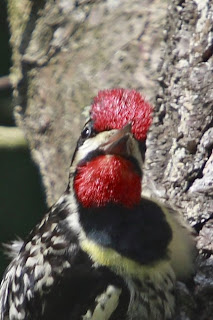 Oh, did I mention the bear? Yes, we saw a bear right on the property. The neighbors told us that they have seen a bear in our field, but we haven't seen it. Connie and I were on our way up to the slate quarry and happened to turn around - and there was the bear coming up behind us. He went up the road toward Frank, Frank, Frank's cabin but we got a great look at him on the trail before he headed off. WOW.

Oh, did I mention the bees? Yes, I got stung by a swarm of honey bees while trying to get Roxy's leash untangled from some branches. I didn't know that I could still run that fast! I got stung 4 times and Connie's poor sister got stung once trying to get the bees off of me. That will teach her!

This year was the first time that Connie's dad did not accompany us on the trip. He was in hospice, and passed away on Wednesday while we were at the cabin. The place will never be the same without him. He was a true outdoors man and hunter. I guess he sent us that bear.

Next post will hopefully include some shorebird sightings as I am headed to the Delaware shore later this week.
Posted by Linda