And Then the Fog Lifted

We started at Higbee beach around 7:30. It was overcast and foggy but good enough visibility for close up birding. Tons of birders were there. We had to park way down the road past the "Morning Flight" platform. We walked through the birders and picked through the trees for a few birds including Baltimore Orioles, 2 (not so) Scarlet Tanagers, and lots of Brown Thrashers.
We stopped by the CMBO store close to the Cape May Lighthouse to buy a new Sibley Guide because mine ended up in Tohicken Creek at Lake Galena and the pages are all stuck together. We couldn't even see Lily Lake or the top of the Lighthouse. A guy there said that it would clear up soon. We'll see.
The parking lot at the Lighthouse was packed. I never saw so many people there. They even had pony rides going on. Pony rides. Nobody at the Hawk Watch platform seemed happy when we passed by. There were alot of people on the platform with there heads hanging down. Not looking up like they wanted to. They should have at least looked at the ponies to kill time. We headed out behind the dunes and into the trails around Cape May State Park (the Lighthouse).
We were stalking some unknown birds sounds (that might have really been frogs because we never saw any birds even though the sounds were coming from right beside the trail) when all of a sudden, the fog lifted and we saw blue sky. And then a Bald Eagle, and a Peregrine Falcon, and a Sharp-shinned Hawk, and another Peregrine, and another Eagle that was flying even lower than the first one, and 2 Ospreys, and then a kettle of Sharpies, and Red-tailed Hawks, and Peregrines, and, and, and. And wow that's what. 2 kettles formed with at least 20 birds each in a matter of 10 minutes. Pretty impressive flight. The best hawk flight? Probably not but it was really great to see all of a sudden. Here is a photo of a Peregrine Falcon from last year: 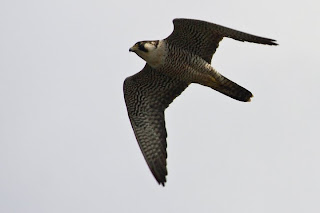 Then it was off to Biggie's 50th surprise party in Cape May Courthouse for a really great party! Happy Birthday Biggie
Posted by Linda