Yes, we chased the Ivory Gull that has been reported at BreezeeLee Marina this week. Yes, we saw it! It flew all around the marina, sat on pilings, and generally didn't care about all of the people gawking at it. This is the first Ivory Gull ever reported in New Jersey and has been hanging around all week. The Sibley Field Guide states: "Rare. Found in extreme far north among pack ice; rarely ventures farther south." In fact, they make their living following polar bears around and picking the leftovers of seal meat. The gull is so rare, that famous birders have not seen it even though they travel to the arctic specifically to see it. We saw it. snicker, snicker.

The adults are completely white. The bird in NJ is an immature which has some "smudging" of dark feathers on it's face and some brown/black feather tips on some wing feathers and black tips on the tail. Here is my best photo which shows these markings and the marina. From pack ice to packed boat yard: 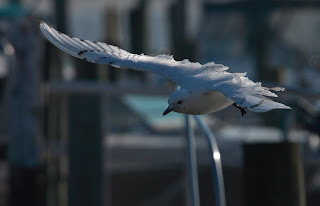 The next photo shows 1) the gull backlit by the morning sun and 2) the top of Tara's head just before she was blinded by looking into the sun - with binoculars. "Don't look into the sun, don't look into the sun" I said because I could see her following the gull's flight path directly into the sun. She didn't listen, but she did regain her sight within minutes. snicker, snicker. 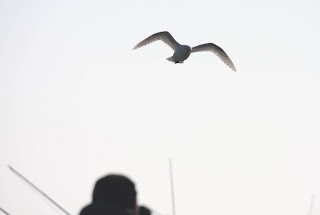 The gull was NOT our first life bird of the day however. We noticed some cars and people with scopes pulled over on Ocean Drive on our way to the marina. A nice couple pointed out the Norther Goshawk sitting in the cedars along the marsh and let us look through his scope. Very nice. He also told us that he just left the Ivory Gull, so our nerves were calmed somewhat.

After staying with the Ivory Gull for awhile, we drove down to the concrete ship and the lighthouse to see if anything was up. Only about a hundred Widgeons on the pond, that's what was up. We then headed up the Parkway to get Lori and Tara their Harlequin Duck - which was the whole reason for the trip in the first place. I thought we would have a chance at the Avalon Sea Watch so we went there first. No Harlequins, but we did get Long-tailed Ducks and Common Loon up close and some Common Eiders out by the jetty.

Then, off to Forsythe NWR with our Wawa sandwiches for ducks and geese. Here is a Hooded Merganser photo which I thought would turn out better than this but at least you can see his cool "hood": 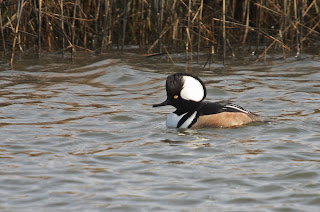 After an hour or so at Forsythe, we made a last push for Harlequins and drove farther north on the Parkway to Barnegat Lighthouse. It was now 3:30PM. We left the house at 7:30 AM. We were tired. We were running out of daylight. The wind was howling down the beach. We persevered and walked to the end of the jetty. We got the Harlequins! 1 male and 2 females right next to the jetty. Unfortunately, the light was not good enough for a good photo. Sorry Tara, this is the best one: 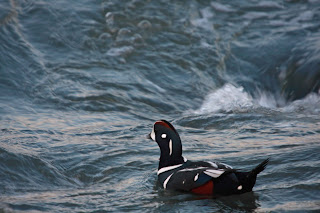 We made it back to my house by 7:00 PM. Almost 12 hours. Lori and Tara had more than that because they had another 20 minutes on each end of the day.
Posted by Linda