My Lowest Point Yet

Well folks, I am officially at my lowest point ever.  Rock bottom.  In despair. Can't get over it.  Need some sort of make over.  Here I am at 48 years old and unable to complete a hike in the woods without sweating, gasping, and shuffling my way up the last "bonus" hill.  Embarrassing is an understatement.

It started with an email from Frank stating that he was excited that Connie and I would be in Potter county over July 4th and could accompany him and Norm (both older than me) on the next leg of their hiking circuit on a trail called the Donut Hole.  I was excited too.  It was an opportunity for me to hike with some really nice people who had experience hiking these mountain trails.  The trip was scheduled for 6 - 8 miles and we all anticipated being back to the camp in time for an afternoon swim in the stream.

We were all set to leave at 5:30 AM (which turned into 6:15) and get on the trail early (which turned into 8:40 AM) with a great group of hikers including Frank, his son Jamie and new wife Katelyn, Frank's daughter Erica and her husband John and their 2 children, Justin and his girlfriend (another, younger, stronger, faster, prettier Linda), and me (the older, slower, fatter Linda) - and of course Roxy and Jamie's new puppy were in tow too.  Off we went - up, up, up, and up some more on a steady incline which lasted a loooong time.  I was immediately the last one in line.  The younger, faster, prettier people were soon out of sight . . .

I managed to pass Frank at one point during the long uphill (click the Play button):

Once we got up the first hill, we went up some more, then some more.  Then finally, it leveled out a bit.  The group was still way in front of me. 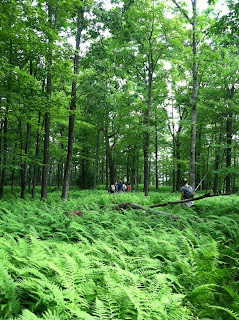 Hikers on the Donut Hole trail

The young and fit people kept going, following the trail which had not been used in quite some time.  It was overgrown in most places forcing the people in the front of the group to look for the orange trail blazes so that we didn't end up lost (like they did last year).  The trees with the blazes on them were missing in some places which made me glad that we were with experienced hikers. 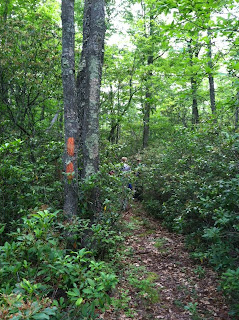 Mind you, I was just huffing and puffing along in the back of the group.  Frankly, they could have been going anywhere and I would have just followed along.

Good news - A Rattle snake crossed our path!  How is this good news?  It is GREAT news because it made everyone stop hiking for a few minutes while we watched the snake and I caught my breath.  Good news because Justin saw it before he stepped on it.  Good news because everyone in the group got to hear that sound that you know is a primal warning even though you never heard it before.  Good news that young and old alike stopped dead in their tracks when the shshshshshshhshhhhhhhh broke the sound of our footsteps (and panting).  Young and old alike instinctively grabbed the dogs and the kids (not necessarily in that order).  Good news that the snake coiled up and sat there while we all got great views of this magnificent creature.  Good news that I happened to bring the iPhone and my camera along too.


Rattle Snake - Part 1
And really Good News that Justin has a snake as a pet, so he knows how to approach them without getting bit or harming the snake. 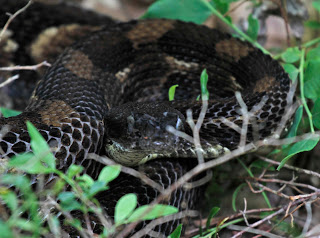 Rattle Snake close up
We spent about 5 minutes with the snake and then it was back to the hike at break neck speed.  I spent some time in the afternoon acting like I was bird watching and taking pictures of bear poop just so that the group didn't think that I couldn't keep up (which I couldn't). 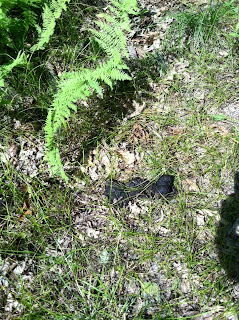 Bear Poop on the trail

By this time I was sweating so bad that I couldn't see through the salt that was streaming into my eyes. Roxy was panting behind me full of sticky sap from the ferns.  It was beginning to look like I would hold up the group when Frank declared - "oh good, another bonus"!  "Bonus" to Frank means another hill.  I wanted to cry but I was too dry to produce tears. . .


Up, up, up we went.  Then up some more.  This time, it seemed like we were going straight up.  Everyone was out of sight now - the pretty people, the children, even Frank. All out of sight.  I shuffled along like an old woman.  Frank broke the sound of panting and temple pulse by yelling that they had found the Fire Tower!  This was good news.  It was all down hill from there.

After another mile of downhill hiking, we came to the end of the 11 mile trail.  There was an old, rusty pipe protruding from the side of the hill at the roadside with spring water streaming from it.  I did the unthinkable.  I filled my water bottle and drank it.  Giardia be damned.  I'll deal with that later.  Water never tasted so good.  Neither did the beer that Frank treated everyone to when we arrived at the Wharton Tavern.

Mortified doesn't begin to describe how I felt after that hike.  But remember, none of the pretty people were having hot flashes!  I had a great time.  A hike to remember.  We will be talking about the Rattle Snake forever.  The pretty people won't remember that I was holding them up (I hope).  I'll get over the hot flashes (I hope).  I can't wait for nest year.
Posted by Linda

Love this story. Is it "nest" year because you are a bird
watcher? Have you ever considered writing as a career?

loved this Linda! I'm tracking you now cousin - received a copy of your post via my Mom through your Mom. Loved the story & the vids - a hoot. You probably walked faster than me...........susan

Glad you liked the post. I am finally recuperated!