This trip to Europe was definitely a whirlwind. We spent 4 days working pretty hard with very little time to explore which meant practically zero birding. You can imagine that didn't stop me from carrying bins and camera around. Here are a few prizes. The first is Great Tit. Europe has a lot of Great Tits (stop chuckling).

The other bird that we saw in every city is hard to miss - Magpie. Large and lovable. This guy is investigating something below the fence in the park in Brussels.

The Jackdaw is also a city dweller. We saw these birds everywhere too - mostly where there was easy pickins in parks. I love the white eye against the black face.

Nothing says adorable more than a duckling swimming around a fountain in Olde City. This guy drew a crowd for sure. 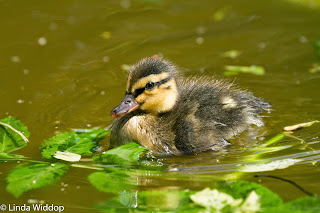 Another cute bird in Europe is the European Robin. Our Robin is named after this bird but as you can see, this one has a blue outline and is much smaller. I found this one skulking around the bushes at the Atomic Park.

Speaking of Robins. This bird is a close relative of our Robin but the Europeans call it a Blackbird. Remember the Beatles song "blackbird singin' in the dead of night"? How about "four and twenty blackbirds baked in a pie"? This is the bird that they were singing about.

OK. Tits and Magpies and Robins are one thing, but how about Parrots in Brussels? Yup. I heard a weird call while walking through a city park on the way to see a concert. Luckily, I had my camera along or you might not believe it. This is Rose-ringed Parakeet. There are a lot of them in the city - all the result of a few escaped pets that learned how to live in the city on their own.

The birds better watch out for this guy. He seems to be aiming at them with his golden bow. He also has a great butt.

The birds better watch out for this guy too. He looks like he could chomp on one at any time.

The birds really need to watch out for this guy. He and his mate have a nest in the tower of the Cathedral in Brussels. He was out hunting early. I saw him eyeing up pigeons in the square and sure enough there were feathers raining down onto the sidewalk when we visited the site later in the day. The local bird society has a video feed of the nest where we watched Mom feed 4 babies while Dad sat outside.

I caught these two love birds courting each other in the cemetery in Stockholm. These are Common Gulls.

We saw more birds than I thought we would in Brussels and Stockholm but hardly any birds in Warsaw. We were just too busy and barely got to see any sites there. It all changes on Friday afternoon when work ended and I headed out to the country. More on that later.

Email ThisBlogThis!Share to TwitterShare to FacebookShare to Pinterest
Labels: Europe

What a great trip this has been. You are so lucky to have been able to visit so many countries and actually get to get a taste of their culture. Please plan to spend some time with us when you get home and tell us more. HH

great trip report. I am living in Europe but I will move to Philadelphia next year. Looking forward to reading more on your blog.
Your picture saying "Great Tit" actually shows a Blue Tit.
Jo