I went out on another pelagic birding trip yesterday with SeeLife Paulagics in hopes of seeing some offshore birds. We left Wildwood Crest aboard the Atlantic Star at 10 PM Sunday night and made it 100 miles offshore to the edge of the continental shelf by 4 AM. The seas were calm, the sky was bright blue and the temperature was perfect.

We were greeted by Leach's, Band-rumped and Wilson's Stormpetrels in the early morning. These are little birds that can smell fish guts and shark liver oil from miles away (that's what we use as chum). Here is Band-rumped in flight.

Here is the Band-rumped picking at the chum.

This is Wilson's. I know, it looks exactly like the Band-rumped. The only way that I can tell the two apart is by the way the Wilson's feet drag out behind the tail when they fly. This is because their legs are a little bit longer than the Band-rumped. Who ever figured that out?

Here is the Wilson's with a tasty morsel of shark liver. He actually looks happy. Yuck.

We were all hoping for another type of Stormpetrel called White-faced but we didn't see one all day. We did have a few unexpected sightings but not the avian type. These were the cretaceous type. The trip leaders saw a whale blow in the distance so we headed over to get closer. Even at a distance, the leaders knew what type of whale it was. They could tell by the blow. Notice that the spray isn't going straight up but it is shooting out to the left (away from the camera). That indicates Sperm Whale. Point of interest - Right Whales are named "Right" because they blow to the right.

Sperm Whales eat giant squid that they find at the bottom of the sea. We were in 6000 feet of water. This fellow took a deep breath and headed down just as we approached. You can tell that they are going deep when you see the giant fluke rise up into the air like this. 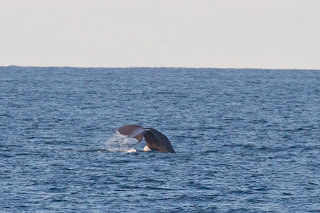 One Sperm Whale sighting is amazing but as we turned our attention to the other side of the boat, we saw 6 more whales blowing to the left. Wow. We were actually in the midst of a pod of females and calves! I tried video where you can see 2 whales diving.


I know, I know - "whoooaaa". I wanted to provide commentary but when they dove, all I could say is whoooaaaa.

Whales weren't the only mammal surprise. We also encountered 2 pods of dolphins that are rare for the area. These are called Pantropic Spotted Dolphins and are usually found much farther south than Jersey. Boy did they put on a show. No video, but I got some pretty good photos. They really like to jump out of the water.

They also like to play in the wake of the boat.

They got so close to the boat that you could see the spots that give them their name. You can also see that they are pink too.

This one got so close that you can see his exhale bubble trail underwater.

And then immediately inhale when the blow hole broke the surface of the water.

The dolphin and whale show would have made the trip for me. We could have gone back to the dock at this point which we kind of started to do. After all, it takes 6 hours to get out here and 6 hours to get back to Wildwood.  On our way back, we found some more good birds like Cory's Shearwater. We probably saw 20 or so. This guy flew by pretty close.

Here is another Cory's (right, back) sitting with a Great Shearwater (left, front).

This Audubon's Shearwater also put on a show close to the boat.

Once again, I realize that they all look alike at first. Here is a bird that stood out from the others. This is Pomarine Jaeger in mid molt which makes him look more like a vulture. Ugly.

Another bird that is still weird to see 60 miles offshore is this Red-necked Phalarope. These are shorbirds that make their living at sea. It is still hard to believe even though we see them regularly.

What made this sighting even more odd is that this bird was eating a moth. How does a moth get 60 miles offshore only to be eaten by a shorebird?

The day was really great. Made it back to Rydal by 7 PM sun kissed, salty and pooped!
Posted by Linda