Some birders like to see how many birds they can find in the city limits of Philadelphia. So when a few rare birds from the far north showed up on Friday, cell phones lit up with text messages. I got the alert on Friday, but could not get out to see the birds until today.

An easy ride from Jenkintown to FDR Park in South Philadelphia due to President's Day. I have only been here a few times before and forgot how big the park is. There is a large lake in the center of the park. The rare birds were there with a few hundred of their cousins. Can you see the odd birds in the crowd? Here they are:

Did you spot this one:

Neither of those are the target birds. The target birds were sitting on the ice right in front of the pack. Look closely at the first photo again. Go ahead. Try to spot the geese that look a little different. A little smaller. A little darker. How about now?

I admit, it isn't easy to pick these birds out of the crowd. Luckily, they were sitting smack in the front of the pack. They mostly slept while I was there but occasionally, one of them would get up and stretch. Here is one of them standing up for a bit. 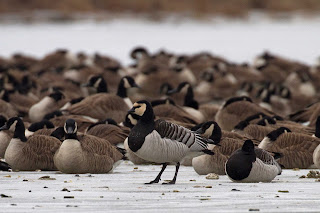 What kind of birds are they? Barnacle Geese. These are geese of the far north typically found in Greenland and Scandinavia and northern places like that. Each winter, one or two show up in our area but usually in places that are not as convenient as a city park. My first encounter was down right dangerous. You might remember this post:  My Poor Car - from my big year contest.  These were MUCH easier.

Really good post! Could we make the goose into a pet? Again, thanks to you and Connie for a superb dinner and a very special evening. You made my day! HH

We enjoyed seeing you too.