This is the nerds first time in a large group like this which had many up sides like not having to worry about details like where to go, what birds would be there, how to get there etc. The group consisted of 16 birders, 1 bird field guide (Alex) and our driver (Gustavo or Gus). Gus took care of logistics and driving. Alex took care of finding the birds, getting everyone to see the birds, coordinating the meals and lodging etc. All we had to do was follow the group. We ate each meal as a group. Alex took time at dinner to review our bird list for the day and tell us where and when to meet for the next day's adventure.

Our first big outing and tour in Honduras was to a place called RVS Cuero y Salado which is a mangrove estuary. Alex told us to be at breakfast by 6:00 and on the bus by 6:30. The bus trip only took 20 minutes where we would board the "Banana Train" at 7:00. Banana Train?

Banana - we thought was due to the train being yellow but turns out that the train used to carry banana pickers out to the fields in the old days.
Train - well, it was on tracks. The engine consisted of an engine mounted right next to the driver who had a lever and a brake pedal. That's it. 2 cars were attached to carry all of our group plus the regular passengers such as school children.

The track was one long straight line that took us through really poor rural housing, fields that used to be banana plantations and swamps.

Military guards ride the train to protect the passengers. Not sure what could happen but we didn't ask.


The train dropped us at the end of the line where little boats awaited to take us up into the mangrove estuary. We couldn't have asked for better weather.


Our guides took us to the places where we could see the specialty birds that make the estuary home. The first bird that we saw was Boat-billed Heron. This is an impressive bird with a wide bill and cool floppy feathers on his head. 3 of them were in the mangroves along the water's edge. Our boat driver pulled right up so that we could get a good look. 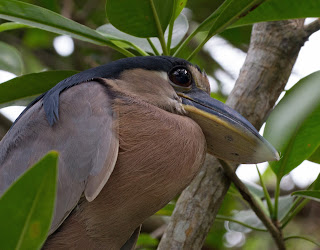 Another resident along the banks were Northern Jacana. Here is a baby following the parent through the reeds and lily pads. 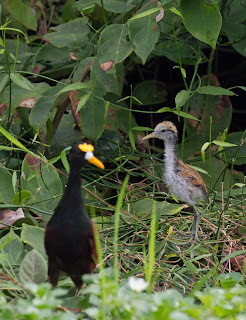 Kingfishers are abundant in Central America. Unlike our area where we only have one type (Belted), Honduras has 6 types that can be seen. We found 3 of them along the estuary.  Here is Ringed Kingfisher which looks the most like our Belted except it has a rufous belly.

This one is Green Kingfisher. This gal hung around under the mangroves and allowed the boat to get pretty close.

The most uncommon kingfisher is Pygmy. It is also the hardest to see due to it's small size and habit of hiding in the mangrove roots. Can you see it?

We saw lots of other birds plus some other animals like this huge Crocodile lazing in the sun.

And these bats hanging onto the trunk of a tree.

Here is a close-up of one of them. Furry little fellow huh?

The crowd pleaser had to be the howler monkeys. We heard them roaring in the distance and also stumbled upon a family right along the bank. Here is Dad keeping a watchful eye.

Here is Junior figuring things out for himself. He was curious about the boat.


How cute is this?
What a great day in Honduras. And this is only the beginning. Way more to come as I process photos.
Posted by Linda