Birding in Colorado in April is well known to birders as the "Chicken Trip" . In this case, we are referring to Prairie Chickens which do a breeding dance on "leks" that warrants National Geographic TV episode. There are 2 species of Prairie Chickens - Lesser and Greater but the "Chicken Trip" also includes 4 species of Grouse which also do the displays - Gunnison, Sharp-tailed, Dusky and Greater Sage Grouse. Nature tour companies run trips to Colorado for 10 days to see all 6 species plus other Colorado birds. Todd and I did it in 4 days.

I admit, the agenda that I set for our Colorado trip was ambitious. I think Todd was worried but the itinerary actually worked out great. We now refer to our trip as the Non-Chicken Trip since we saw all of the Grouse but neither of the Prairie Chickens. We cut out the chickens due to the location of those leks being really far away. We would have needed 2 more days to get to those. Plus, the chickens can actually be found in other states.

We started our grouse trip in Gunnison located in the southwest part of the state where there is a very rare Gunnison's Sage Grouse. Gunnison is the only place in the world to see this grouse and the wildlife rangers are very strict about viewing the lek. There are a million rules:


With all of these rules, you would think that the birds would be really close and skittish. Turns out, this was our view. I had to use red arrows to point out the birds. The ridge was 1 kilometer away.

The birds started displaying at 6 AM. By 6:45, we were bored. The wildlife office told us that they would be finished by 10 AM. Good thing neither of us are rule followers. We left at 6:45!

On to our next quarry - Dusky Grouse which can also be seen near Gunnison at the Black Canyon park. Although many birders find the Dusky here, they usually do not see them displaying since these birds do not use a lek. When we arrived at the canyon, we ran into a birder who we know from New Jersey - Tom Johnson. Tom is an excellent birder and a professional tour guide. He had 2 vans of birders looking for Dusky Grouse and found one on the side of the road. Todd and I stopped to view that bird and found 2 more further up the road. Then we found this guy actually displaying. You can see the red air sacs on his neck and the yellow eyebrows.

Later that day, we headed north to Hayden in search of Sharp-tailed Grouse. We found a hotel and headed out before dawn again to get to the lek that another Jersey tour guide located a few days before. It paid off. We saw a few Sharp-tailed grouse but didn't see them displaying.

3 down, 1 to go. Off to Walden to see if we could find Greater Sage Grouse on the lek. We arrived at 8:45 and found only one bird hiding in the sage brush. Reports on the Internet indicated that there were over 100 birds at this lek but we arrived too late. No worries, we found other birds that day and got a hotel room. The next day, we arrived at dawn and found a spectacle of booming grouse on the lek. Greater Sage Grouse as far as we could next to the dirt road. This was the nature show that we came for.

I couldn't stop myself. Here are just a few. The males gulp air to inflate balloons in their chest, puff up their necks and display their tails to impress the females. 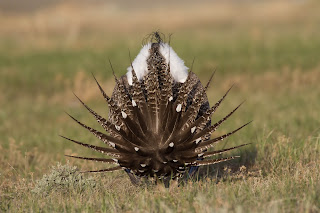 Like most males involved in impressing females, they often fight. Here are 2 of them squaring off.

Feathers flying. They beat each other with wings until one runs away.

Meanwhile, the females casually wander around the lek looking for the most impressive male. When the females wander off, some of the males leave the lek or rest for a bit. Here is one resting.

The birds have paparazzi. 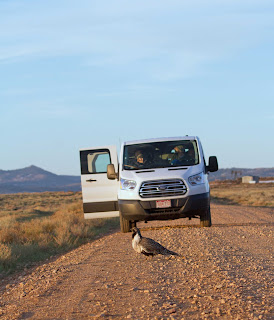 The obvious question is: Why did the chicken cross the road? Answer: Sex!

After all of the birders and most of the birds left the lek, this male kept at it. Click the play button on the video.


He was rewarded (if you know what I mean) by this female. Believe me, this photo is the G-rated version. I have X-rated versions too.

No romance here. He hit it and quit it. Off they flew into the sage. It was all over before 8 AM.

One of your best! Ya' done good! HH