Let me start by saying that there are no words to describe the experience during the total solar eclipse. I'll try here but it probably won't come across as awesome as it was in real life.

I first learned of the predicted US total solar eclipse a year ago and immediately decided that I wanted to see it first hand. As August 21, 2017 drew near, I asked the nerds if they wanted to head out. Only Lori and Tara said yes. Once we purchased the eclipse goggles from Amazon, there was no turning back. 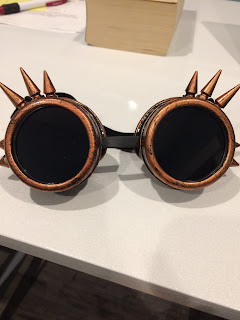 I studied the maps. The "path of totality" stretched from Oregon, across the country to South Carolina crossing a total of 12 states. 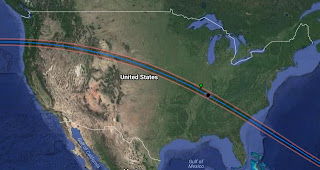 We could have gone anywhere but how do you make plans in advance to see an eclipse of the sun when you don't know what the weather will be? My friends Patty and Steve took a chance and booked a trip to Oregon. Steve is an astronomy buff and probably knew that the odds of clear skies in Oregon were high. My coworker Tom went to South Carolina with his wife and friends because they knew people there and wouldn't be totally disappointed if they didn't have clear skies. I, on the other hand, didn't want to take a chance so I concocted a plan to just drive to the closest place along the totality path that had clear skies. The eclipse date was a Monday, so we had 2 days to get to where ever we saw clear skies predicted. Lori and Tara agreed to go as far as Nebraska if necessary.

Luckily, we didn't have to drive to Nebraska. We only had to go to Tennessee. And, we went in style. Crazy Lori rented an RV so that we had our own bathroom and sleeping arrangements in case everything else was booked up. Smart, smart thinking. We only made it to Natural Bridge Virginia on our first day due to late start and horrific eclipse traffic on I-81. It actually worked out nicely. We got to see one of the 7 wonders of the world (as listed in the 1800s :-)) and once owned by Thomas Jefferson. He purchased it from King George III for $2.40.

This was also the birdiest part of the trip. The creek that carved the natural bridge is home to many Louisiana Waterthrushes - we saw 3 along the creek - and this Green Heron.

You know I drove most of the time but when I wasn't driving, I was on the Internet trying to get us camping spots at RV parks. I managed to find one in the Smoky Mountains about 2 hours north of our destination. Everything else was booked solid. Everything. It worked out great.

E-Day arrived and we didn't want to miss out on being on the actual path so we were on the road by 7 AM anticipating traffic jams. Driving the RV on mountain roads is not an easy task but I managed to do a pretty good job. In fact, we pulled up next to a guy from NJ who complimented my driving. He said that he was following us for a while and impressed on how I handled the RV. We made it to our destination - a little crossroads near Tellico Plains called Belltown by 9 AM.

Now what? Sit and wait til 1:30 PM when the show starts. But where? We couldn't sit on the side of the road for hours. Leave it to me. There was a house and barn on the corner where we wanted to be. Yes, I marched right up to the front door and rang the bell. No answer but I found the homeowner, Charlie, out in the yard. I asked him "Do you know where you are?" to which he replied "Yes I do". Picture Charlie with a shaved bald head and biker mustache staring at this nerd in his yard. Comical. I asked him if there was anywhere that we could park the RV. Anywhere around the neighborhood? A parking lot? Anywhere? Meanwhile, I'm eyeing up the barn on the corner. We went round and round for a few minutes. Me pointing out all of the other cars with out of state license plates cruising up and down the road. Him telling me that he could tell I was a Yankee by my accent. He finally said, "Well, I guess you could park over by the barn. How much would that be worth to you?" $20. Sold.

We pulled in and got ourselves set up. Before you know it, other cars are slowing down and I'm collecting $20 per car for Charlie and his wife Karen. By the end of the day, they had $160 and a yard full of strangers. Karen and Charlie, 4 dogs and 5 miniature horses were all very friendly.

Everyone that pulled into the yard was really nice. The chance encounter of strangers from Maryland, Florida, Pennsylvania, Tennessee and Georgia made the experience that much better. We could have gone to a crazy party town like Nashville. Or, we could have found a spot to be totally alone. But this was perfect. Of course, I ended up being the Master of Ceremonies for the whole thing - taking photos of people in front of the barn, lining the whole gang up on the path (and making them all hold hands), getting everyone's email address so we could share photos, etc.

Then the show started. I didn't realize that it would take 3 hours but it did. I bought a special filter for my camera so that I could safely take the photos without burning out the sensor in the camera.

Once the sun was totally eclipsed by the moon, you can look at it without the goggles and photograph it without the filter. I read an article online about how to take the photos. The author wrote that the most important thing to do during an eclipse is to actually look at it and experience it before trying to photograph it. Sage advice. I did both. As the moon took over, the temperature cooled and the light was less intense.

At the very start of totality, just as the moon is about to cover the sun, the last little bit of light is called "The Diamond Ring". You can see it in this photo.

This is when the skies darkened and the cicadas started calling. Karen's miniature horses came out of there little stall to cool down. Lori took video of the scene which can be seen and heard on FaceBook.

Then, the sun was totally eclipsed. The effect is called "The Corona" since it looks like a crown shooting out from the dark center. The corona is actually the sun's atmosphere. I was dumbfounded.

This lasted just over 2 minutes and then another diamond ring appeared on the opposite side of the moon.

And then just as fast as the sky darkened, it became light. The cicadas stopped chirping and the little horses went back to the barn. Slowly, over the course of another hour, the moon left the sun and the strangers left the yard. We were the first to arrive and the last to leave. I took almost 1000 shots of the event. In this one, you can see three sun spots lined up.

Sadly, none of us will be around for the next total solar eclipse to cross the US in 2079. We may still be here in 2024 when we can see one near Illinois.

It was awesome. Words can't describe it.
Posted by Linda

I'm glad you're my friend
I just love Crazy!!!!

Solar eclipses are one of the most frightening yet astonishing natural occurences one can experience in their lives. I have yet to see one, and I really hope I can atleast once.