Let's be clear, March 21st is the first day of spring. Meaning the day of the vernal equinox which means that the northern hemisphere will start to have more of the sun's warmth. It doesn't mean that winter is over. In fact, we got 6 inches of heavy snow dumped on us on March 21st. Our Screech Owl suffered through it with dignity.

Despite that fact, Peanut and I have seen some small signs of spring. Starting with this Eastern Phoebe that showed up at the mudhole this week. His pumping tail was a sight for sore eyes.

Slowly, slowly, winter may be giving up it's grip. Peanut and I felt energized and decided to take a walk at Pennypack park to see if we could find other signs of spring. Walking by the creek, I heard and saw a big splash. I looked for a Kingfisher but no bird was in sight. I looked for a tree branch but none surfaced. I looked for kids throwing rocks but Peanut and I were the only ones on the trail. Then, I saw something swimming along. I couldn't believe it - a Beaver!

The splash that I saw was the Beaver slapping his tail on the surface just before diving under. He did it again and next thing I knew, he was swimming about 3 feet in front of me. 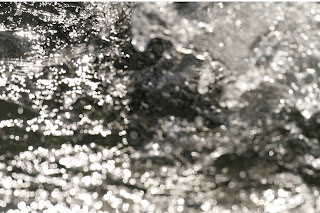 Splash, he was gone again. Peanut and I left him alone to explore our Pennypack creek. I hope he makes our creek his home.
Posted by Linda