My friend Barb Bassett asked for help in completing a Winter Raptor Survey in Salem County NJ a few weeks ago. I've read about these surveys but never had the chance to do one. The survey is conducted in a specified area using a very detailed "route". Here is a map of our route:

Each number represents a turn on our driving directions. We start at #1, then go to #2 and so on until we reach #53. We are supposed to record any raptor (hawk, eagle, falcon or vulture) that we see. We were supposed to start at 8:00 AM and end around noon. Our group had 4 people:
Barb driving, me navigating, and Marty and Jayne staring out of the car windows watching for any raptor.

We had a pretty good day tallying 20 Bald Eagles, 40 Red-tailed Hawks and a high count of 14 Red-shouldered hawks along with a few other species. The eagles were a highlight for me since we really never had any in our area until recently. Here is a photo of a juvenile eagle sitting on an electric pole.

We also had a neat encounter with several eagles along the Delaware River. An eagle flew right over our car and perched in a tree at the Church Landing Historical Museum. Then another eagle landed on the same branch.

I was on the phone with my mother at this point and got so excited that I dropped the phone under the car seat and had to hang up! What happened next was even more incredible. A third eagle came in and tried to cut in on the action. 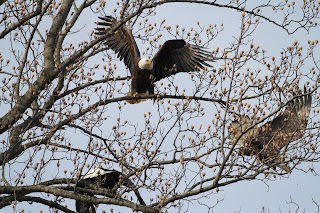 He chased the other 2 off of the branch and sat there screaming.

On closer look, we noticed that the interloper had metal bands on his legs. You can see a green band on the right leg in the photo above. Zoom in and you may be able to see the numbers 74 etched into the band. I reported this to the federal banding website and hope to get some information back shortly.

We had a great time on the day and contributed to citizen science project. I look forward to participating next year.