Oh Mike, You Take Me To All the Nicest Places

Birding in Kuwait is a sometimes like birding at home and then sometimes totally NOT like birding at home. Most of the "hotspots" are centered around water as you can imagine. We went out to a remote abandoned quarry to find true desert birds. The place was barren except for a few shrubby trees surrounding the quarry pit. The winds howl in the desert and blow sand and trash for miles. Every tree and fence line that we passed had at least one plastic bag tangled in the branches. 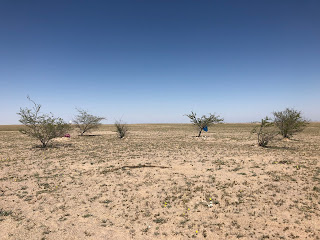 Along with the trash, the trees also hold birds. We were able to track down a few specialties. The trees also attract migrants that are passing through. In fact, here is a photo that shows both the migrant (Semi-collared Flycatcher) and the trash.

We saw a group of Blue-cheeked Bee-eaters which are really cool looking. Not the best photo but they barely stopped moving so I was happy to get any photo at all of these colorful birds.

Another really cool bird that blends into the desert is Crested Lark.
We headed back toward the city to hit some other birding locations. I have to admit that I was a little worried when Mike pulled the car into a back alley that looked like this:


Is this the part where I disappear and they only find pieces of my body years later? Gulp. Not to worry (of course). Would you believe that this is the entrance to Jahra Farms?  Once we went inside of the walls, we found the "farms" which is more like a community garden co-op than the farms that we are used to in the US.

The farm/garden attracts birds due to the water and vegetation. Strange to see Kingfishers and Herons in a farm setting.

This Squacco Heron is sitting in the middle of a patch of parsley which will eventually end up in one of the local markets or restaurants. The "farms" ended up being a great stop on our tour not only for the birds but also for the cultural experience. In fact, here it is on my plate in tabouli salad - yum! 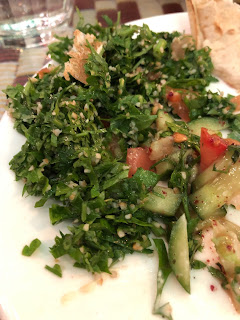 Back to more traditional birding locations after the farms including Sulaibikhat Bay . This spot is more like birding Delaware Bay in Cape May except that Sulaibikhat Bay has Greater Flamingos!

Two Flamingo species in a month. Who would have thought? The bay also had multiple gull and tern species along with shorebirds. Unfortunately, the birds were pretty far out on the mudflats for photos.

Our last stop was by far the most familiar to me. We headed to Jahra Pools which is a large wetland area where we found and photographed birds up close. One of my favorite bird groups is the Kingfisher group. We found 2 very cooperative species at the pools. White-throated Kingfisher indeed has a white throat.

But the aqua color on the back is more impressive.

The other Kingfisher that uses the pools is the Pied Kingfisher. "Pied" means black and white and this bird exemplifies the pied name. This bird posed for us balancing on a reed in the wind.

Pied Kingfishers hover above the water looking for a fish.

It felt like home when we spotted an Osprey roosting in a dead tree.

But then, we found 6 Greater Spotted Eagles that use the marsh for night roost. We photographed a few soaring low over the marsh.
As they were landing for the evening. Interesting to see that they like to roost low in dead trees.
And even on the ground.
We spent some time looking for marsh birds like rails which are called "crakes" in Europe and Asia. Our patience was rewarded with up close views of 2 species. We had a typical view of Little Crake.

Yup. That is about the best view that I usually get of rails and crakes. Barely visible through the thick reeds. Not so for the Spotted Crake. This bird really put on a show running out in the open water.

A nice way to end an amazing day of birding in an amazing new area of the world - Kuwait.