Hummers and Antpittas were not the only birds that we saw on our trip. Ecuador is home to other fantastic and fantastical birds. One bird that I have really wanted to see since I first saw a picture in a magazine is the Long-wattled Umbrellabird. This is a black beauty in the Cotinga family that has some interesting adaptations. The feathers on the bird's head form an umbrella hairdo. Males have a long "wattle" which is similar to a Tom turkey only much longer with more feathers. You can see the wattle hanging over the branch in this photo.

I was hoping to see one of these birds but never imagined that we would see 13 of them flying around the farm fields! The wattle is so long that it swings when the bird walks along the branch.

Umbrella birds are the type of bird that uses "leks" like the Greater Sage Grouse that I saw in Colorado. Each morning, all of the males gather in one area to show off to each other and determine who is the king of the flock. Umbrella birds do a little dance and actually flare out the feathers on their wattle when a female is close by. you can see it here.

Unfortunately for me, the weather was overcast with off and on rain. Not great for bird photos, but a perfect opportunity for me to try to be funny. Here I am with my own umbrella and Umbrellabird. I couldn't resist.

Another bird in the Cotinga family that many birders want to see is the Cock-of-the-Rock. Unlike the Umbrellabird which is black, the Cock-of-the-Rock is bright red. Like the Umbrellabird, Cock-of-the-Rock males gather each morning at a lek to show off to each other. The lek that we went to was part of Angel's tour. We arrived before dawn to gather in a bird blind so that we didn't disturb the birds as they arrived. This is the top bird in the lek. He had the best perch and chased of many of the other males that tried to get too close.

Both species are pretty large birds and easy to see which is why they need to be protected from local hunters. Having Angel and other local guides helps to protect the birds and educate the local people of the value of the lek site too. Our tour group paid each of the local guides $20 per person to see the birds which is quite a bit more money than they can make farming or hunting. A win-win for sure.

Other interesting birds of central and south America include the Toucans, Toucanettes, Aracari and Barbets. We saw a few species but only got photos of some. These two were easy to photograph since they were munching on bananas at our hotel's bird feeders.

Believe me, I could post many more bird photos from Ecuador but birds were not the only subjects for photography. We also saw some animals, reptiles and plants that you may enjoy seeing. We saw many butterflies. Here are two species in the "glass wing" family. You can see right through the wing. 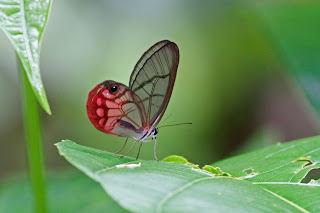 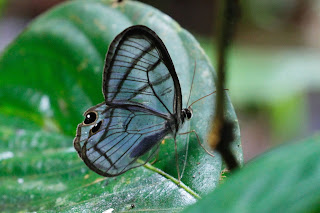 Our group is not afraid of snakes. In fact, we hope to see snakes when we are birding. We found 2 species in the rain forest. The first was this Green Vine Snake. It really looks like a vine. She was pretty approachable and completely harmless.

This snake was also very approachable but the opposite of harmless. This is the Choco Hognose Viper. I don't know how Marty spotted this snake. He was completely camoflauged surrounded by leaves. Our guide used a stick to move the leaves away so that we could get a better look. Check out those eyes! He is looking right at the camera.

Other reptiles that we encountered included several species of frogs. This guy was my shower buddy. He would come in and out of the bathroom window at night. Cute right?

There are lots of lizards too. This one was right outside of the hotel entrance. It took me a few seconds to actually see it even when Todd was pointing right at it. It is 2 feet long and still undetectable. Can you see it?

The rain forest is home to Howler Monkeys. These primates are easy to find since they spend alot of time howling which can be heard for miles. This dude was upset that we were on the trail beneath him.

Last on the list is this freakishly large grasshopper. We found him on the defunct sliding board at the hotel swimming pool (that's another story). Look at the size of that thing. Birds won't even try to eat these things because they are too big and have spikes on the back of their legs that can hurt the bird.