The Owl and the Pussycat

Great-horned Owls begin their breeding season in the depths of winter. Courting begins in December when you can hear them hooting a lot in the evenings and see them perched out in the open during the day. Nesting begins in January and once that happens, the owls disappear. The female is hidden on the nest which is usually in a large cavity in a tree and the male is hiding out nearby keeping a careful watch on his mate. This continues through February and March. We hike the trails and never see an owl. In late March or April, things change again and we begin to see an adult owl sitting out during the day. She is watching the nest from nearby now because her babies are so big that she doesn't have room to sit with them in the nest. 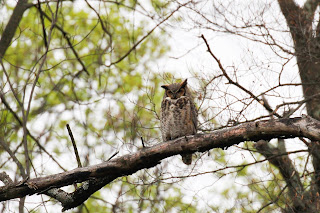 Dad is also sitting nearby to keep an eye out for trouble. 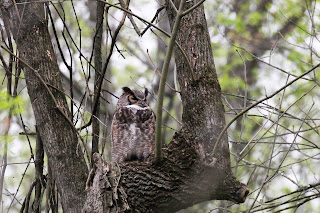 The babies are big enough to move around and can be seen in the nest cavity most days. Connie and I have been keeping tabs on the family for the past week. 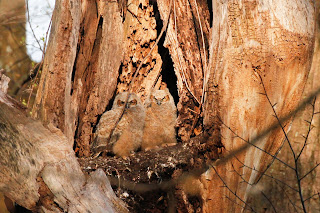 And now for the pussycat. Well, not exactly a cat. More like our dog Peanut acting more like a cat than a dog. While Connie and I were watching the owlets (who were watching us right back), Peanut found a tree to climb. 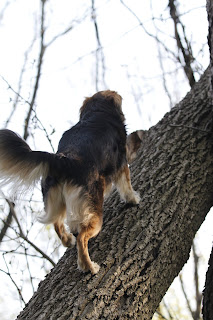 She was up there so high, it scared me to death. Here she is scrambling back down.

Yay! We're finally back in touch! I'm still reading the posts I've missed. This
"time off" is great for for catching up. You'll be glad to know that I think even
without my constant comments, your work has been excellent verging on AWESOME!!!

I hope you and Connie stay safe and healthy. HH