The weather was much better today but the company was much worse. It was only me, my dog Cocoa, and Di and Barbara's dog Sammy. Neither one of my companions are any good with spotting or identifying peeps or ducks. They never call out an Eagle or Harrier. They just sit in the back and pant. And Sammy can't sit still. And I have to walk them and pick up their poop. Enough about that.

My sister and Barbara decided to cruise the "Eastern Caribbean" - hence Sammy's company today. They better send photos and lists of the birds that they see from the ship or don't bother coming back. Lori decided that she needed a new lamppost and today was the day to do it. And poor Connie was sick. So I took the dogs and went back to Forsythe in search of big head ducks.

I got 2 big head ducks - Hooded Merganser and Bufflehead. Here is the best photo that I got of the Mergansers. The Bufflehead were too far away for any chance of a photo. 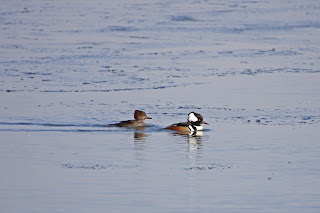 I also got a pretty good shot of a sleeping Ruddy Duck. 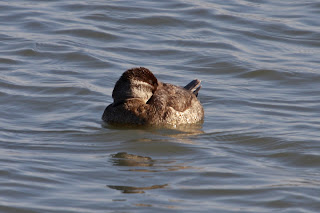 The Peregrine Falcon was sitting out on the platform today. I also saw one sitting on an Osprey platform close to the road eating some scraps of something.

Another wonderful sighting today - Laura and Stu (and his little dog too). I was quite surprised to see them today and it was fun talking through the car windows. I hope you guys saw the Widgeon. Stu had reports of Snow Buntings near the end of the wildlife drive. We didn't find any.

I wanted to check out some of the other roads to the bay today so I drove out to the end of Great Bay Blvd. It was kind of a bust. It's kind of a long road to the edge of the bay but you can't really see the bay from the end of the road and there were a lot of fishing boats screaming around so I imagine that there aren't any ducks anyway. Oh well.
Posted by Linda