Finally able to post our trip from Sunday in southwest Florida.  I can't say enough about my iTouch and the new "app" from Cornell Lab called Birdseye.  I mentioned it in previous posts, but it really came in handy this weekend.  I noticed that there were quite a few birds listed in the Punta Gorda area at a hotspot called Bunche Beach.  The couple that we met at Babcock-Webb WMA also mentioned Bunche Beach as a good location.  So we were up at 0'dark:30 and off to explore Bunche Beach in Fort Meyers, then planned on a stop at Ding Darling on Sanibel, and finally Corkscrew Swamp in Immokolee to round off the day.  It was an ambitious plan for sure.  It was also lousy weather.  Cold enough for jackets and really overcast all day with intermittent drizzle/mist.

We timed the trip according to low tide which was at 8 AM.  We started the day at Bunche Beach so that we would end up at Ding Darling when the tide was out.  It turned out to be a smart move.

Bunche Beach (pronounced Bunch but we continued to say Buncheee all day)
The tide was out which exposed alot of the beach.  We saw 2 birders way out in the distance using a spotting scope to view a hundred or so Black Skimmers.  We walked the beach toward them when all of a sudden, all of the Skimmers took off across the bay.  What a bummer.  We looked up and realized why the Skimmers were high-tailing it off the beach.  An immature Bald Eagle was cruising for a quick meal.
The 2 birders with the scope turned out to be Ann and Charles from Babcock-Webb.  What a coincidence.  We got really great looks at Sanderlings - I know, I know, who cares about Sanderlings but they were running across our feet all morning.  We couldn't help but coo over how cute they were.  We also pretty much had a workshop on 4 plovers with up close views of each.  Black-bellied, Semi-palmated (1st photo), Piping (2nd photo), and Wilson's (lifebird for us, 3rd photo) were also running all around us on the beach.

Ding Darling
I had an epiphany about timing this stop at low tide which turned out to be good.  We arrived after low tide and saw more birds than we have seen there in a long time.  Roseate Spoonbills, White Pelicans, all species of Herons and Egrets (including Reddish), sandpipers and gulls were all feeding in the mud flats in large numbers.  Yeah. We also got close up and personal with a Spotted Sandpiper feeding in a ditch.  Here is the best shot that I could get in the poor conditions: 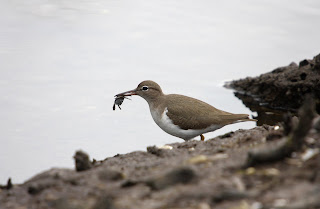 Corkscrew Swamp
We headed to Corkscrew swamp after lunch hoping for Barred Owl, Pileated Woodpeckers and possible Swallow-tailed Kites.  We only got one of those (Pileated) but we were surprised by the number of passerines that we saw up close. We listed 29 species in all.  Unfortunately, the light was soooo bad by then that none of my full frame photos came out.  All blurry.  I could cry.

On our way out of Corkscrew, we drove north on a back road only to spot 2 Crested Caracara flying next to us, landing in a Palm tree, then landing in the middle of the road to pick at some dead critter.  Cars were beeping at them to get them off of the road.  Caracara in Florida?  Pretty cool.
Posted by Linda

I never really went bird watching until my retirement this January and Donna and I now go with a group from our RV Park every Friday morning. The people are really great at spotting birds and explaining what they have and I am learning ever so slowly.

The main reason for my comment is that Donna and I LOVE your blog! Your stories are colorful and humorous and very enjoyable. We are sharing your website with members of our birding group.

Thanks for your hard work on this site. It is wonderful!

Please give Connie our love.