OK, I couldn't come up with a bird name beginning with "K" that we actually saw yesterday on our day long journey in North Jersey. We didn't see a Kite or a Killdeer or a Kittiwake but we did see the Loons and Mergansers. I have been hoping to visit Manasquan and Shark River Inlets due to reports of Pacific Loon, Redheads, Kittiwakes so I talked Connie into going along since we both had the day off from work.

We headed to Shark River Inlet first and stood in the frigid wind looking into the gray ocean under the gray sky with 3 other nerds for about 20 minutes until Connie grabbed the car keys and ran back to the car. I stood there for another 10 mind and body-numbing minutes searching for that Pacific Loon - which the other nerds thought they saw but confused with Common Loon - until I packed it in too. Roxy didn't even get out of the car. That's one smart dog. There was still snow on the beach from last week. That is how cold it has been this week.

Once we warmed up a bit, we headed to the marina area on the back bay to look for ducks. We saw the usual suspects - Hooded Mergansers, Bufflehead, gulls, Brant and swans, but nothing out of the ordinary.

On to Manasquan Intlet! We pulled into an unassuming parking lot at "Gull Island" to eat our sandwiches (delicious ham salad and chicken salad from Roger Miller's on Martins potato rolls). It turned out to be the highlight of the day for us. First, I caught a glimpse of these Savannah Sparrows - one of which is Ipswich subspecies which is very unusual: 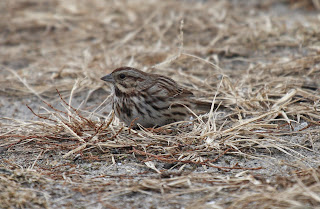 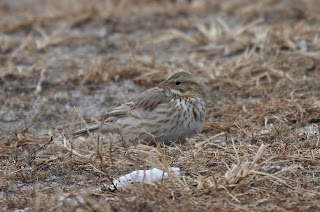 Savannah Sparrow - Ipswich - notice how much lighter brown it is?
Then, the lunch stop got even more interesting. Two people got out of a Chevy Suburban dressed in wetsuits and proceeded to gear up for scuba diving. We were too shy (can you believe it?) to ask them if they were NUTS but another guy walked right up to them to get the scoop. Yes, they were going scuba diving in 28 degree weather hoping to catch some shrimp in a little net. I wonder if they know that they sell shrimp - already steamed - at Acme?

I didn't feel bad for the rest of the day when I was standing on the jetty at Manasquan Inlet or at Bargenat Light Inlet. I just thought about those 2 idiots scuba diving and got warmer instantly.
Posted by Linda

Are you sure they were wetsuits? Drysuits are very common and diving in frigid temperatures can be very comfortable in a dry suit. :) Either way, divers are (or at least can be) a lot like birders, just with fish instead of birds. And like birding, you can do it pretty much anywhere!

Hi Amy -- I don't know the difference between wet suit and dry suit. The suits looked pretty thick but I still wouldn't go into any water in New Jersey in winter :-) Us birders are crazy enough though.