The Philadelphia E-A-G-L-E-S blew a 17 point lead and lost to the 49ers yesterday in really bad form but the real Eagles - the Bald type really put on a show over the weekend. I personally had a "touchdown" (6 eagles at Higbee beach) and "extra point" (1 more eagle soaring over RT 55 on my way home) on Sunday.  I saw 4 eagles in the sky at the same time which I have not seen since I was in Seattle 5 years ago.  Here are some photos - not as good as the warbler photos from the last post. 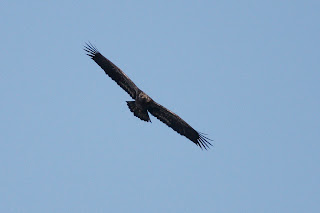 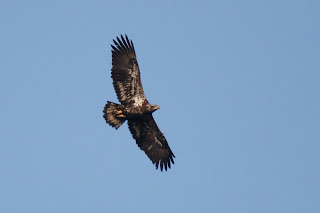 Juvenile Bald Eagle
(click to enlarge)
Notice that this bird does not have the white head and tail but it has that giant beak!  Also notice how the wings are held straight across when soaring which is a good way to tell that it is an eagle and not a vulture.  Vultures hold their wings up in the air forming a "V" which makes it easy to remember - V is for Vulture (not Vodka!)

Here is a series of photos showing an adult Bald Eagle harassing an Osprey to drop it's fish.  The Osprey eventually dropped the fish but the Eagle never got it.  The fish is laying somewhere in the marsh. The photos are really far away but I think you get the gist of it. 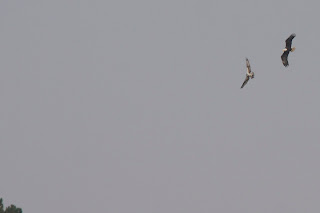 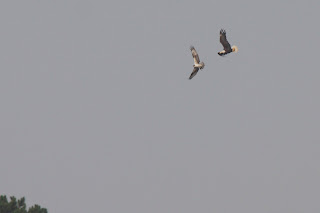 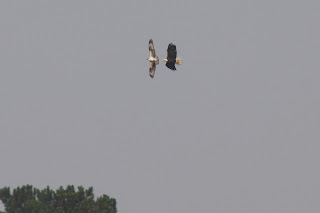 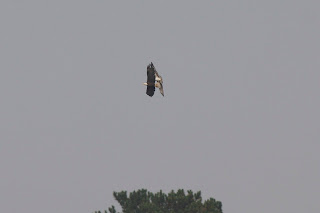 Check out CMBO's View from the Cape to read another account of eagles this weekend and see Tony Leukering's photo of an adult Bald Eagle that passed close to the lighthouse.
Posted by Linda