The winds and weather were not that great for migration this weekend. Kind of a bust for the hawk watchers and the Big Sit birders at Cape May Point. Sunday morning at Higbee proved to be really quiet. We did manage to see our first Towhees of the season and a nice Nashville warbler, but really nothing else. We were home by 9 AM.

Monday morning was a bit different. I started out at the canal and immediately noticed dozens of birds flying north overhead - chipping all the while. Some landed briefly before taking off northbound again. Ruby and Golden Crowned Kinglets were mixed in with the Yellow-rumped Warblers. It soon became apparent that the dozens were turning into hundreds as they never stopped flowing overhead. Yellow-rumps were all over the place but mostly in the air. Tom Johnson is the official counter for the Morning Flight. He recorded 2000+ Yellow-rumps before 10 AM so you can imagine how many flew north, past Higbee throughout the day. Coincidentally, the Villas is north of the Morning Flight location . . .

I was in Cape May on Monday for work, not pleasure (wink, wink). I finally left the house at 4 PM after meeting with a client and doing some more work on the computer.  I was all set to do a quick walk on the beach with the dog and then head home but I never made it to the beach.  I was inundated with warblers and kinglets as soon as I stepped into the yard.  Yellow-rumps were literally everywhere flitting from every tree and bush in our yard and our neighbors' yards. They used any and every perch they could find to launch themselves into the air to catch bugs.  Here are some photos which don't even include the Black-throated Green Warbler and the Kinglets. 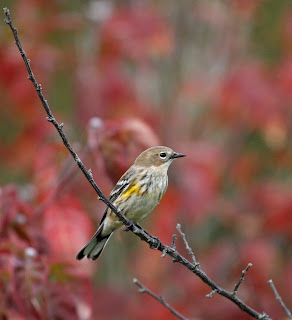 Yellow-rumped Warber sitting in our yard 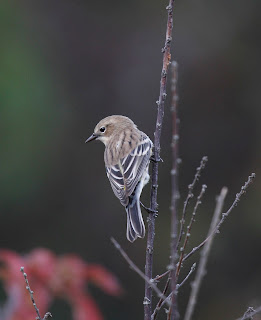 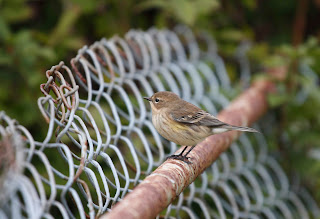 Yellow-rump sitting on our dilapidated fence 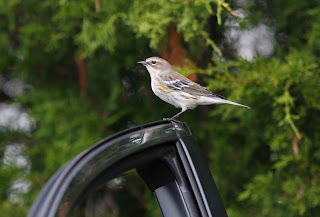 Yellow-rump sitting on the driver's door of the Subaru! 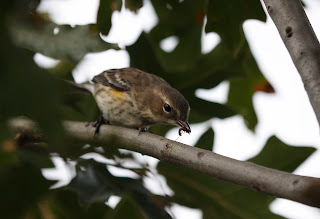 Yellow-rump chowing down on a bug

These are all presumably different birds.  There were at least 20 at any given moment in our yard.  How is that for Yellow-rump overkill?

I can see why you put that photo first! I love the fall red background.