Take a look to the right of this post. You should be able to see that I am 1 bird shy of 700.  I would really like to get #700 in 2011.  The only way that will happen is if I can see Saw Whet Owl or Long-eared Owl this week.  I don't think that will happen but you never know.  Another possibility would be for some interesting gull to show up in Cape May.

Birds can sometimes be very elusive.  Even large birds like Sandhill Cranes which stand 4 feet tall and have red feathers on the tops of their heads can be difficult to spot even though you know that they are around.  So says my friend Mark anyway.  He has a farm out in Somerset County which I blogged about here (click to re-read the post).  He has 2 Sandhill Cranes that have taken up residence there and even had a baby last year.  Mark and his wife have a dicken's of a time finding those birds when they visit the farm.

Apparently, Barbara has a difficult time spotting Sandhill Cranes too as shown in this photograph from our recent trip to Florida: 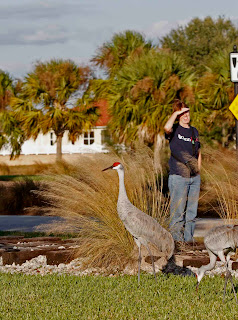 Apparently, it only takes a sprig of ornamental grass to completely camouflage the Cranes.  Look at how skittish these birds are!  (NOT!)  Here is another photo of the birds stumping both Barbara and Diane: 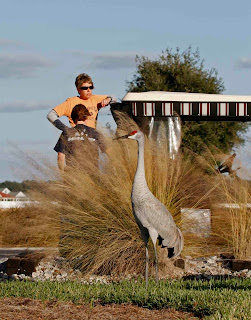 Diane has even tried to elevate herself on the back of the golf cart for a better view, but from the looks of this photo, she still can't spot the bird. I think Barbara is looking at the field guide to lend assistance in the search . . .  Its a good think I was on the other side of the grass huh?

More photos of the elusive Sandhill Crane.  Mark should study these photos so that he knows what to look for the next time he is on the farm. 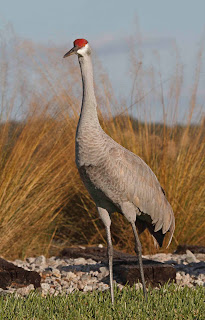 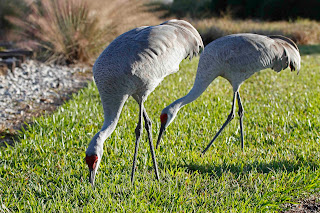 I think the Cranes in Florida are much different, wintering over on French Fries at the golf course instead of foraging for left over corn in our fields. Maybe we should try leaving fries around and yelling "fore!" every now and then!

This was a very fun post. Who knew you had a sense of humor?