Barbara and I went on our first official pelagic birding trip on Sunday.  We sailed out of Belmar NJ on the 80 foot fishing boat "Susie Girl".  It was 18 degrees with 15 mph winds and 3 foot swells when we left the dock.  18 degrees.  There were about 30 people on board with binoculars, cameras and lots of hats and gloves.  The entire front of the boat was covered in ice with every wave that we hit.

The trip was run by a really good birder named Paul Guris.  His team wins the World Series of Birding almost every year.  His website See Life Paulagics (get it, Paul-agic).  He runs these trips in winter because it is the best time to see Alcids - birds that live on the water such as Dovekie, Murre, Razorbill and Puffin.  There birds are waaaay up north for the rest of the year, so the only way to see them in our area is to get on a boat in the middle of January and freeze your ass off! 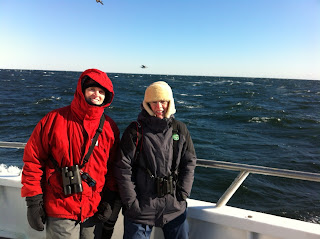 Check out my stance.  I am trying to stand upright in the rough seas!

We didn't get great views of the Alcids on our trip due to the wind, waves and water temperature, but we did manage to see the little football-shaped birds flying around out there.  The highlights of the trip had to be the Fin-back Whale that made an appearance about 200 yards away from the boat.  The Fin-back is the second largest whale and it looked like it.  The part that showed above the water was as big as the Suzie Girl!

The other highlights included the Gannets that followed the boat along with all of the gulls waiting for chum.  Yes, we chummed with beef suet the entire trip so that the gulls and Gannets would follow us. 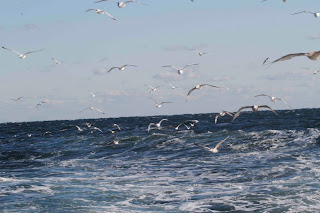 It paid off with a few rarer species that we got to see and photograph up close.  Including this Northern Gannet which has to be one of my favorite birds. 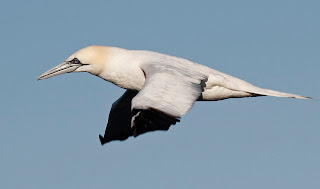 This is an Iceland Gull which is pretty rare in our area.  One of the other passengers, Adrianne (guy, not gal) was trying to help me find this bird in the mass of gulls by telling me that it was "coffee colored".  I was looking for a dark brown/black bird but he meant - with cream. The gull followed the boat for a long time, so I really got to get a few good photos. I like this one because it shows his pink feet. 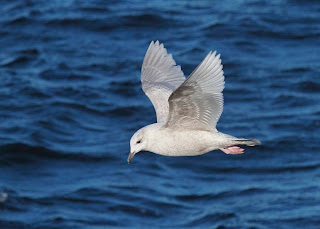 Here is a Black-legged Kittiwake.  These birds are smaller than other gulls and very agile in the air.  This guy (or gal) was out maneuvering all of the other gulls to get to the beef bits that were being throw overboard. 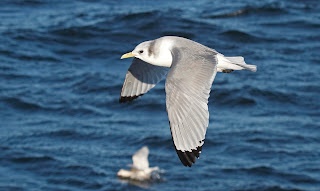 This bird must have done this follow-the-boat-for-food thing before because it knew just where to be which was directly over the back of the boat to watch the guy (Tom Reed) who was chumming.  This next shot is more typical of the what I saw for about an hour with the bird directly overhead. 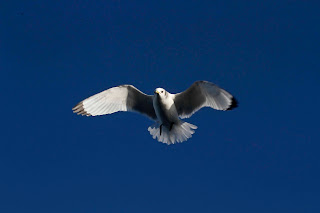 You should ask Barbara about the little "gift" that she got on the front of her jacket from our little airborn friend . . .

The Kittiwake was getting so much food, that the gulls started harassing it rather than trying to get the beef out of the water for themselves.  Here are a few shots.  I like the second shot because all of the Herring gulls are in mid squawk! 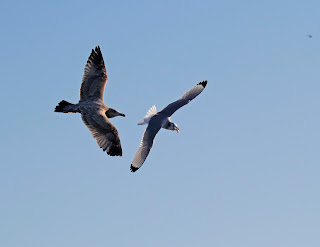 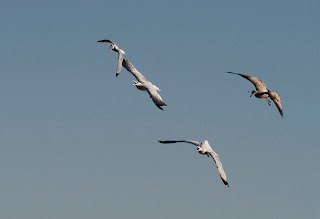 Barbara got 6 life birds including Dovekie, Razorbill, Common Murre, the Iceland Gull, Black-legged Kittiwake, and the Lesser Black-backed Gull.  Only the Iceland Gull was a lifer for me.  We will definitely go again and I would highly recommend this trip for anyone interested in seeing seabirds.  I would also highly recommend that you go with Paul and his crew.  He did a great job and had really good crew of trip leaders along.  Here is a link to his site:  www.paulagics.com/site/

Hope there was hot chocolate waiting for you!

That photo of you and Barbara was clearly taken by a great photographer.... I enjoyed meeting you both on the trip. Maybe we will meet up on a warmer trip when it is actually possible to talk because your lips aren't frozen shut ! P.S. is your email on here anywhere? I can't find it.
Jason Estep, Newark, Ohio

Jason -- thanks for the post and yes, the photographer really made us look better than we did in person that day! You can email me at linda@npowerpa.org . Tell your mother that we enjoyed meeting you both. Drop me a line if you are in south jersey.