Besides all of the dog and Potter stuff, Barbara and I accompanied our friend Frank on his final leg of the now famous, Donut Hole Trail. This trip was MUCH easier than the previous years for several reasons. First, we had shorter distances to cover and had 2 days to do the 16 miles. Second, Hyner Run Park was in the middle of the trail so Frank rented the "Lodge" for us to stay in for 2 nights. That meant, no carrying tents, sleeping bags, food, etc in our packs which made the load lighter.

Third, the trail itself is easier in this section - very little stinging nettle and easier ups and downs. Here is Frank photographing one of the rusted DHT trail signs for posterity.

We heard a ton of birds along the trail and even got to see a few but the most visible sign of animal life was from a bear (or 2, or 3) that left marks all along the way. There was giant bear poop:

And giant bear paw prints:
And damage to trees along the way from the bear rubbing into them:

But alas, no bear. There was however, a Red Eft that was very accommodating:

We hiked through miles and miles of Mountain Laurel in bloom. By far, the most that I have ever seen.

Couldn't resist a "selfie".  This is probably one of the only DHT photos in which you will see me smiling!
We cooked out on the grill at the Lodge and had a nice fire. 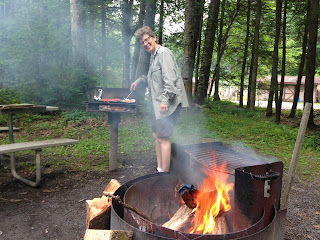 We also cooked in the massive kitchen. The lodge had sleeping for 10 and a giant living room that could hold another 6. 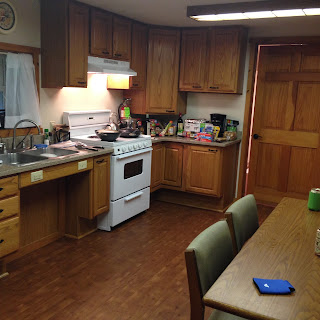 The best part of the hike was the ending. We headed out on day 2 at 7 AM. Got lost for a bit due to the trail being relocated to accommodate fracking (another story that I won't get into here), but managed to finish before noon anyway. Here is victorious Frank at the end of the trail. Congrats Frank.

Here is the rest of us.

Frank has vowed to re-do the beginning so that Barbara and I can complete the entire trail. We'll see . . .
Posted by Linda

Not that you asked my advice...BUT, skip the beginning of the trail. My arther-ritiz is killing me and I don't think any of us (you,Barb or yours truly) need the brambles and stress the hike would entail. Just sayin'. HH