Famous Birders Can Be Nice Guys Too

This week, the guest speaker at the DVOC meeting was a world famous birder and author - Alvaro Jaramillo. He has written field guides, has a tour company, runs pelagic trips in California and has many other accomplishments. The club announced that he would be giving a talk about gulls this Thursday. It drew a crowd. His talk was informative and fun even though the topic of gulls can be daunting for most normal birders.

As always, the club members headed to Cherry Street Tavern after the meeting. Alvaro joined us to continue the discussion and get to know some of the members better.

Alvaro was also enlisted to give a talk at the Wyncote Audubon's annual dinner on Saturday night so he was gracious enough to co-lead a field trip with George Armistead and Martin Selzer to Heinz NWR this morning. Once again, he drew a crowd of over 40 participants. 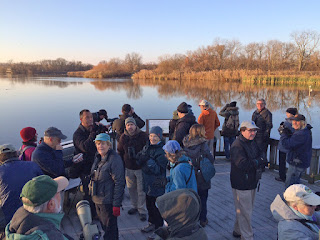 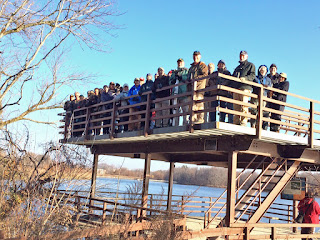 There weren't many interesting birds - mainly basic ducks and a few songbirds.

Best bird for of the day for me was Fox Sparrow.

Anyway, Alvaro is a super nice guy that gave the Delaware Valley alot of his time and knowledge.

Re: Cherry Street Tavern....Why are all your birders so good looking? Just wondering. HH

I'm call Bullshit on that title!