In the last post, you read about and watched video about Offshore Bottlenose Dolphins. In this post, you will read about and watch video of a different kind of "dolphin". Until recently, North Carolina fisherman have been catching dolphin for many years but not the kind that you read about in the last post. To them, the fish is called dolphin but we know it as Mahi Mahi. The name changed so that people would know that the fisherman weren't killing the real Dolphins.

Guess who else was catching Mahi Mahi? Yup. The birders. Here we are with our catch. The captain and mate put out some lines each day. After filming the true dolphins, I headed to the back of the boat to let others get a view from the bow. All of a sudden, the rod bent and I yelled the classic "FISH ON!"  Paul grabbed the rod and reeled in the first fish. 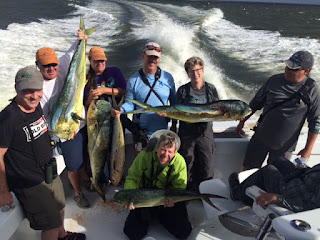 Then another rod bent. The mate handed it to me and I reeled one in. I think the mate was impressed that I knew what I was doing. 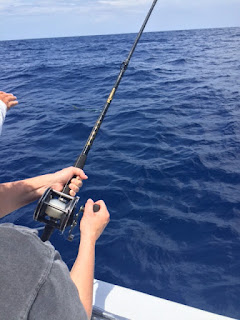 Me and Paul caught nice sized fish - 15-20 pounders but Mike and Mary caught whoppers. Here is video of the mate "gaffing" the biggest Mahi which Mary reeled in.


The mate filleted and bagged up the fish for us. We grilled some at the hotel for everyone and still had some to bring home. Its in the freezer now.

After the excitement, we were back to birding. The last day was really rough. The weather was less than cooperative. Tropical storm Bonnie was building off the coast. Wind and waves made the ride very rough every day. Many participants got seasick. Even the birds were trying to ride out the storm. This Bridled Tern tried to hang on to a paint can in the middle of the ocean.

She finally gave up and took to the wind.

This Pomarine Jaeger was happy to see the suet chunk in the waves but has a hell of a time trying to keep possession. Check out how big that wave is.

The suet chunk was also pretty big. The bird worked hard to try to swallow it as the waves rolled on. 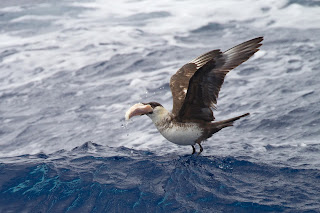 One of the birds that is a target for pelagic trips is the Skua. These are really big birds. You can see them from a long way because they fly high over the horizon and are dark against the blue sky. When spotted, we yell "SKY BIRD!"

They look like giant seagulls. Once they find the suet, they lower the landing gear and gulp every piece that they can get to.

But even these big birds are bullied by the Jaegers. Here is a Pom trying to get the Skua to drop the grub.

Everyone was happy to see the birds and even happier to see the dock at the end of the day. Enough rocking and rolling for the weekend.