Why go birding at the bottom of Texas? Because there are birds there that aren't found in other areas of the United States. Check out the map. You can see how far south we are as compared to Mexico. Therefore, we can see birds that we may have never seen before - or - add birds that we've seen in Mexico or Belize or Honduras to our U.S. list.

So far, I have 7 life birds for the trip and 8 other birds to add to my U.S. list. In the past, I have tried to see birds in many places on my own but when I told people that we were headed to Rio Grande Valley area, everyone said that we should hire a guide to get the specialty birds. Most of the people who suggested this know what they are talking about and they all said that we should hire Mary Gustafson for a day. I met Mary on the North Carolina pelagic trip (she was the other woman in the Mahi Mahi photo). She lives in Rio Grande Valley and is a professional guide. I contacted her and she agreed to take us around on Saturday.

Mary met us at our motel on Saturday morning. It was blowin' a gale outside but Mary was not deterred. I showed her my spreadsheet and she formulated a plan for the day. First stop - Estero Llano Park. We were surprised to find out that the park was actually an RV park that the State took over. There are only 2 campsites that are allowed to be occupied - they are reserved for volunteer "Park Hosts". We met one of the couples who spend the winter in the park showing visitors around. Very nice people from Ontario Canada.

Mary took us to a place near the old bathhouse and found a Common Paraque - which is in the night jar family. They hunt insects in the evening and then roost on the ground during the day. They are very camouflaged against the leaf litter. We saw one in Honduras this past spring.

Inca Dove is another bird that camouflages pretty well. Here is one sitting on a gravel road in the park. You could almost miss her. They usually take off but this one let me get pretty close.

We also found Northern Beardless-Tyrannulet  in the RV part of the park thanks to the Park Hosts and Mary. This is a very secretive flycatcher so no photos. The park also has a lake which has some great ducks and a few Least Grebes which were great to see.

Off to our next stop which was Frontera Audubon Center. This park is kind of in the middle of town but we really hit the birds here. One of our main target birds was Green Kingfisher. I photographed one in Honduras but wanted to see one in the U.S. Boy, did we get a show from not one, but two! Here is the female which perched on our side of the lake. The male perched on the other side of the lake but when she saw him, she chased him off!

We caught up with her again when she perched on the railing of the boardwalk. I snapped this just as she dove into the water after a fish.

We worked really hard looking for another of our Life Bird targets - Olive Sparrow. We spent a fair amount of time looking at the bird feeders around the park waiting for one to slink out from the woods to grab a seed from the ground. Mary and I saw one for a split second but it never came out from under the brush again. We finally heard 2 in the woods later thanks to Mary and saw one  thanks to Barbara's keen eye. Again, no photo was possible.

Thankfully, some birds were VERY photographable. This Black-crested Titmouse sat still long enough for a photo. 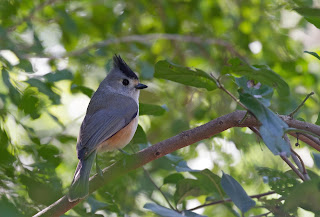 And Great Kiskadees were all over the place. This one perched near the Green Kingfisher for a few minutes.

Here are a gang of them on another pond. I wonder what they are all looking at.

Mary took us to a great little lunch spot and then we headed out to find some other target birds. Some target birds aren't really what most people would call sexy, but I want to see those too. Blackbirds might fall into that category for some people. Mary took us out to a grain silo where we found flocks of blackbirds along the road. They go to the grain silos for an easy meal. And we go for easy birding. Here they are swirling around the warehouse. 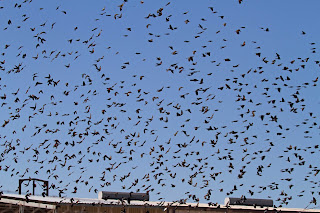 Bronzed Cowbird was on my target list. I saw them in Honduras, but not up close and personal like this. Here is a male all puffed up ready for his bath. Look at those devil eyes! You can see the bronze shimmer of his chest which gives him his name.

We also saw Yellow-headed Blackbirds in the flock. Here is a female getting a bath.

Mary wasn't done with us yet. Off we went to the town of McAllen where she knew we could find parrots and parakeets. We lucked into a flock of Red-crowned Parrots which flew across the highway. We exited and drove up a busy street and found Green Parakeets on the wire. Here are 2 snuggling.

A stellar day despite the unrelenting wind and cold conditions. Thanks Mary!