Venturing Along the Denali Highway

There are 2 problems with Alaska:


This became obvious to us along the Denali Highway. There were a few target birds for our trip including one life bird for Todd. We heard that bird on our first stop but never got to see one until our last stop - some 11 hours later. Yep, we left Copper Center at 9 AM and never got to our Denali hotel until after 10 PM.

The weather didn't cooperate for our Denali highway trip which made it long AND cold AND damp. The birds up here don't seem to mind the weather as much as we do. We came across this Red-tailed Hawk along the road.

We persevered and headed out on a little hike anyway. Here are the girls wandering the path through the tundra. That's right, the Denali highway is far enough north that there are tundra patches where no trees can grow due to the permafrost below the surface.

And here is evidence of the permanent frost - snow piles in June. 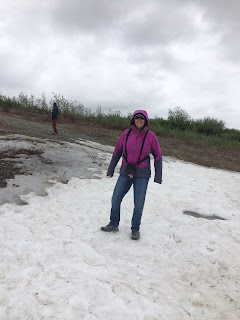 We found some really great birds in the tundra including this adorable Red-necked Phalarope. These are shorebird that we usually only see during migration when they fly far out at sea. They can swim and do so at sea and on the tundra ponds. Stunning breeding plumage on this male pales in comparison to the female.

Another shore bird that we usually only see during migration is the Greater Yellowlegs. Like the Lesser Yellowlegs at Potter Marsh, he was none to happy that we unintentionally stopped near his nest site. Its funny to see them in bushes rather than in the mud.

We also found this Long-tailed Duck in breeding plumage.

The coup de gras for this stop was finding Rock Ptarmigan. You may remember that Todd and I were recently on a trip to Colorado where we found White-tailed Ptarmigan. Rock Ptarmigan are close cousins. Like all ptarmigans, they are white in winter and then change to brown tones in summer. This guy is just starting to get into his summer duds.

We also had our first encounter with Arctic Ground Squirrels along the road. Here is an accommodating squirrel who didn't really mind us taking his photo while he chomped on the dwarf willows.

Other plants thrive in the tundra including many wildflowers. 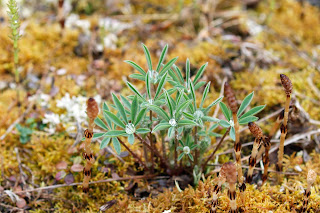 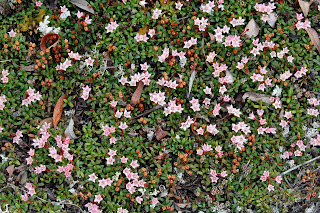 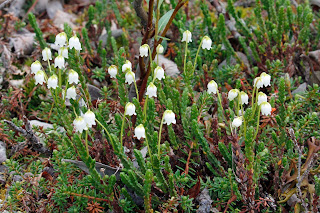 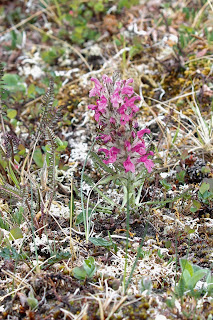 Speaking of ptarmigans, we also found a few of the more common Willow Ptarmigans. They are so common that they show up in many habitats including in the willows, in the tundra, along the roads and even in the restaurant parking lot. This pair seemed to really like the parking lot. Here is the male with his version of the "mullet" - summer on top and winter on the bottom. Check out his furry feet.

Here is his mate. Notice how camouflaged she is. She is obviously getting ready to hide on the nest.

In fact, we saw a ptarmigan nest in the tundra. We didn't find the nest but we found the web cam that someone had posted to keep tabs on the nest site. Her mate wasn't trying to hide at all. In fact, he wanted us to know that this was his parking lot and proved it by guarding the gate.

We wanted to stay on the tundra but knew that rule #1 was closing in on us so off we went heading west. What a surprise to find this Gyrfalcon sitting on a pile of stones!

Impressive! Of course, he didn't stay long enough for better photos but we got to watch him flying over the tundra.

The long drive was paying off already when we stopped at the place on the road where the boroughs change from Matasukna to Denali. That's the spot where another birder told us to look for one of Todd's target birds - Arctic Warbler. Now Di, Barbara and I had seen one in Singapore a few years ago but never saw one in the ABA area. This was our chance to finally get a lifer for Todd. We heard the warbler singing immediately and headed into the bushes to see if we could get a look. Todd pished and the bird obliged.

Here he is eating a bug. This is the only warbler of the "Old World" variety to breed in North America. Birders go to great lengths to see this little wonder.

What a day and it wasn't over yet. We rounded a bend in the road and there it was - Mount McKinley, the highest mountain in North America. Oh, I mean Denali which is the new name that President Obama gave it a few years ago to honor the native people. Look closely. The top of the mountain is above the clouds in the twilight photo.

Look how happy Connie is after waiting 42 years for another glimpse of the mountain that she first saw in 1975 as a teenager.
You should also notice that the road is gravel. I forgot to mention that. What a tough but rewarding drive across part of Alaska.
Posted by Linda

HA. You aint seen nothin yet