Best Day Ever at Sea

If you follow this blog, you have probably read about my "pelagic" birding expeditions. Pelagic birding means that we are out on a boat in the ocean looking for birds that live way out there. Our friends Paul and Anita Guris run the trips through their side-hustle company called SeeLife Paulagics ( a nice play on words). They run about a dozen trips every year in winter and summer. I didn't think I could make the summer trip this year due to work schedule but at the last minute, my calendar opened up.

I took a vacation day and boarded the boat on Sunday night at 10 PM. The trip started out great. The weather was delightful, the stars were bright, the Perseid Meteor shower was in full swing. I slept a little bit but mostly watched the shooting stars and the Milky Way until about 4 AM when the boat came to a stop 85 miles off of the NJ coast. In the dark waters, we could see squid and flying fish under the spot lights and then a few birds flew past the boat in the pre-dawn light. Leach's Storm Petrels are most active at night. Our best chance to see them is at first light. We were not disappointed.

Although we were out past the continental shelf, we were not alone. This ship was the backdrop for our first whale species of the day - Cuvier's Beaked Whale.


The birding and whale watching heated up quickly with many Band-rumped and Wilson's Storm Petrels following our boat.


You can see the Pilot Whales heading toward the boat. The storm petrels are not afraid of the whales and stay on the surface of the water looking for food.

The whales came close to the boat. They didn't seem to mind us.


We saw over 200 Pilot Whales by the end of the day. The ocean currents often carry seaweed from far away lands like Africa and South America. We often find Bridled Terns sitting on the floating debirs. Here is an adult that found a tree at sea.

The tern allowed the 100 foot boat to approach but then took off.

This "weed line" is a favorite for fisherman since it attracts fish that feed on the critters that live in the sea weed. We took the opportunity to investigate the hidden life by scooping up the Sargassum seaweed. We found a bunch of crazy life forms.


This is the Sargassum crab which is completely camouflaged. We put the creatures into a little aquarium so that we could all get good looks and photos before returning them to the sea.


Can you see the File Fish in this photo? Another camouflage specialist.

This Jack fish is the opposite of camouflaged.

This is a jellyfish called  By-the-Wind Sailor. It floats on the open ocean.

The best find in the net was this weird looking creature. It is a Sea Swallow. It is in the same family as a clam but doesn't have a shell. This mollusk is one of the only creatures that can eat a Man-of-War jellyfish. Man-of-Wars have a potent sting that can kill a person. The Sea Swallow becomes just as deadly when it has eaten the jellyfish. I was careful not to touch the creature as I moved it into position for the photograph. I swear it's looking at me. Creepy.

As I said, the weed line attracts fish like Mahi-Mahi that feed on the smaller fish that are feeding on the jellyfish, shrimp and crabs in the weed. As luck would have it, a few of the guys brought fishing rods along. We landed 4 Mahi-Mahi. Here is one jumping as it was reeled in. 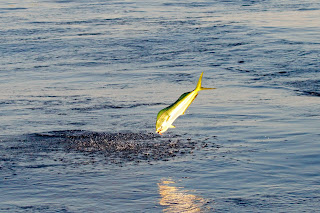 I helped reel one in and was rewarded with a filet to take home. Yum. 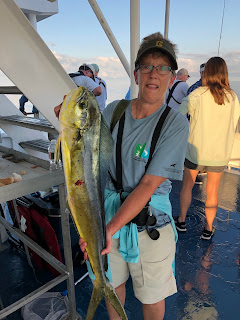 I've been on many pelagic trips off of New Jersey and seen some amazing birds, whales, dolphins and other sea creatures. There is one bird that I haven't seen - the White-faced Storm Petrel. This bird has eluded me for years. The bird is very uncommon but is seen almost every year - just not on the day that I'm out there. My luck changed on this trip. Someone shouted - "this might be a white faced" and sure enough, we all saw the diagnostic Kangaroo hopping bird. It was indeed the White-faced Storm Petrel! I tried to get a few photographs.

You can see the white face on the bird. You can probably also imagine that the bird just hopped off of the water where the splash is but photos do not do this bird justice so I tried to take a few videos. Taking videos with my big camera is challenging. You'll have to endure the shake but I think you can see the Kangaroo hop.


At last, my curse was broken. Little did we know that this would not be the only sighting of the day. We found 2 more in the same area as the first bird. Most trips find 1 at most. We already had 3 and then we found 10 more for a total of 13 White-faced Storm Petrels. I think that might be a record for New Jersey. Crazy.

Most of the time on these trips, we get a burst of excitement and then hours of nothing. Not on this trip. Between storm petrel sightings, we saw a pod of Atlantic Spotted Dolphins who played with the boat.


No rest for the weary. With many eyes on board staring out at the ocean, we find a lot of creatures that break the water's surface with fins. We found 2 shark species. One was a Great Hammerhead which is easy to identify as it swam past the boat. The other had a large dorsal fin but never came close to the boat for identification. Another fin popped up. This time it wasn't a shark fin but a Mola Mola. These freaky creatures look like giant man-hole covers with long fins on top and bottom.


They often float at the surface on their sides to absorb the warmth of the sun - hence the common name of Ocean Sunfish.

The most common fish of the day was Flying Fish. We saw hundreds or thousands of these as they flew away from the boat. It is amazing to watch them fly for hundreds of feet before crashing back into the water. I managed to capture this photo.

Our last creature of the day was a lifer for our host Anita - Humpback Whale. We spotted a mother and calf about 30 miles from shore. As we approached, the whales were under the water but we could clearly see the mother's white flippers.

Mom and calf were quite comfortable near the boat. You can see junior in the center. Mom is so big that only her blow hole is visible in the photo.

What a great day! I'm afraid to go out again and be disappointed. LOL.
Posted by Linda

While there is not an unique bonus in this evaluate or in any evaluate for that matter, Videoslots presents a particular bonus model spanking new|for brand new} gamers, which you can find a way to|which you'll} entry via our evaluate above. But first, check out at|try} the Videoslots welcome provide with our fast guide to the bonus and phrases earlier than you activate the promo. Videoslots can also 더킹카지노 be|can be} certainly one of only a few CashtoCode casinos, which is {a new|a brand new} and exciting fee methodology which isn’t too frequent but in the on-line on line casino market. If you only examine one factor when you’re taking part in} at an online on line casino, that factor should at all times be to examine the licences an operator holds.