So, last month I went out on the Atlantic ocean for the day. This month, Todd and I went out on the Pacific ocean for more birding at sea. We booked 2 trips with Alvaro's Adventures. The first trip was out of Monterey Bay which was pretty good and I'll post about it later. The second trip was out of Half Moon Bay and unfortunately was cancelled due to rough seas. Alvaro and the boat captain felt bad for us and agreed to take us around the bay for an hour so that we could witness the spectacle of a huge Sooty Shearwater  flock that had taken up residence in the bay feeding on a school of anchovies. This phenomenon does not occur often so it was worth the boat ride. You can see the black dots surrounding this fishing boat. 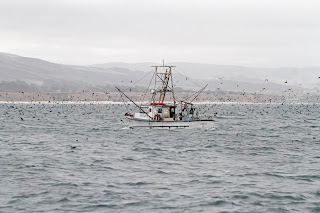 Our Captain drove the boat right into the flock slowly so that we could get a closer look. As the boat approached, the birds would run across the water. 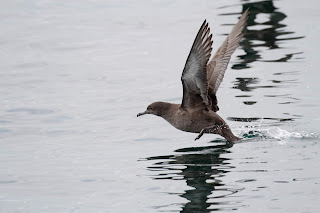 You can see all of the splashing water behind the birds as they tried to take flight. 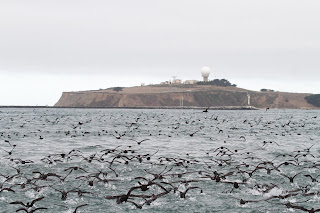 I took several videos so that you could see the birds but also hear the pitter-patter of their feet as they ran across the water to lift off.


It was tough to get a photo of a single bird. They are powerful flyers. In fact, Sooty Shearwaters complete the second longest migration of any bird traveling from their breeding grounds in New Zealand across the Pacific ocean to California and back each year. A total trip of 40,000 miles! 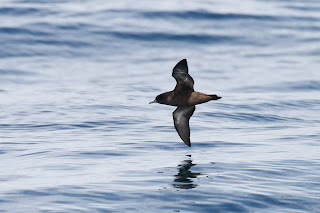 Unfortunately, with so many birds, there are bound to be casualties. We found this dead bird floating face down in the water with a big gash in its side. They are pretty hefty birds. I took this selfie with the bird and Alvaro. I guess its kind of morbid but at least the bird's death will have some positive effects. Alvaro will take it to the natural history museum for study. 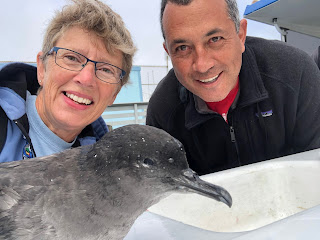 OK, so now comes the interesting part. You need to listen to the video for the story that Alvaro told us. As you read earlier, the Sooty Shearwater phenomenon doesn't happen often. It happened in 1961 and due to weather and other circumstances, the birds lost their bearings and flew onto land. I'll let you listen to the rest of the story.


I really love that movie and now I love it even more.
Posted by Linda