I think that most people who visit Puerto Rico do so on a cruise or go to one hotel/resort and stay there. Most of the resorts are near the San Juan in the northeast part of the island. Lori and I were determined to go birding so we rented a car and headed out on Highway 2 eastbound from the airport. About 25 minutes later, we were heading south  and then 30 minutes later we were heading west on the same highway. 3 hours later, we arrived in the southwest corner of the island to start our birding adventure.

Puerto Rico has 15 or so "endemic" species that are only found on this island. We had a target list and hoped to find some of them. During our 2 days in the southwest, we birded 3 areas and did really well despite showing up at some of the parks when they were closed! We started with a quick drive around Bosque Estatal de Guanica (Guanica Dry Forest) where we found 3 life birds including Adelaide's Warbler. I posted this photo to Flickr and ended up with thousands of views and over a hundred people added it to their favorites list. 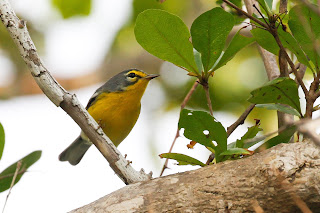 The following day, we went to Laguna Cartegena and ticked off 8 more lifers including this gaudy Red Bishop. They call it a Bishop because of the red "hood". We saw a few of these guys along the road into the lagoon. 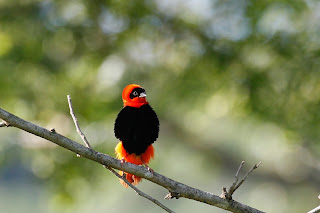 We also found many Smooth-billed Ani along the road. These are pretty large and noisy birds but they fly away if you get too close. This guy apparently didn't get the memo on that and just sat on the fence right next to the car. Look at that giant beak. 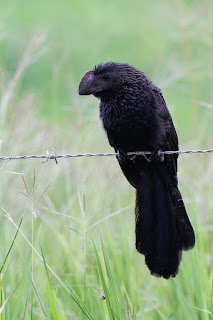 Another bird that usually doesn't let you get too close is the Kestral. I noticed this guy had a lizard for lunch and slowly drove the car closer. He let us get a few shots before turning his lunch into take out. The gross part of the photo is that the lizard doesn't have a head. Yuck. 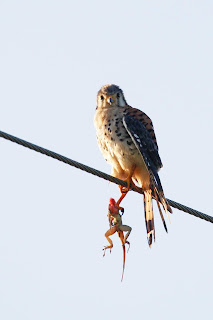 The next day, we finally made it to Cabo Rojo NWR which is supposed to be the best birding in Puerto Rico. We walked 2 miles on the mosquito infested paths and found another 4 life birds including the Troupial which is a type of Oriole native to Puerto Rico. 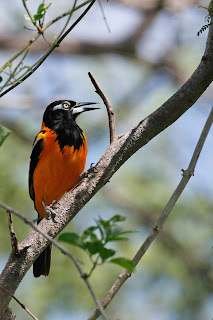 One of the nice things about visiting the Caribbean or Central America in October is that you run into some old bird friends who have recently left our area for the winter. We saw over 50 Blackpoll Warblers at the park. 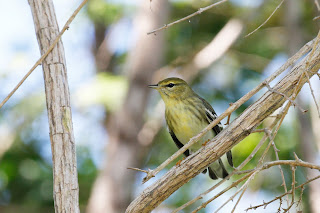 And also found this Prothonotary Warbler stalking bugs in the low shrubs. 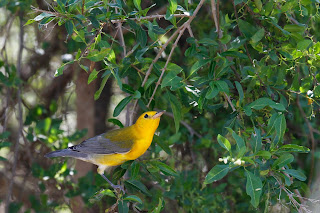 We detoured off of Highway 2 to get to these birding locations. We also tried to go birding in Maracoa which is up in the mountains and ended up on some pretty rough roads which went straight up the mountain in one lane. I got a work out just turning the steering wheel trying to keep the car on the twisting mountain roads. It was really harrowing and all for nothing since it poured rain when we finally made it to the top of the mountain. We sat there for an hour before giving up and going back to the hotel. We did manage to find 3 life birds on the way including this Antillean Euphonia. What a wild colored bird. He has a sky blue head. 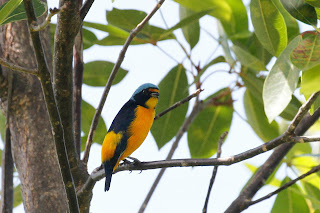 We continued our Highway 2 journey heading west for a few minutes before turning north and eventually east to head back to San Juan and to the Caribe Hilton hotel where I was scheduled to attend a conference on Tuesday.

Between working and schmoozing at the conference, I did manage to find time to head out to Puerto Rico's famous El Yunque Rain Forest and found another 4 life birds bringing the total to 24 for the trip. The drive to El Yunque not only provided more birds but also completed the full circuit of Highway 2.