Well, it finally happened. The temperature was supposed to be in the upper 60's and maybe hit 70. Not exactly Snowy Owl weather. We had this trip planned for weeks to Cape May for ducks and other sea birds. 5 of us set out in the comfort of the Excursion at 7:00 AM. We started at Turkey Point and helped an older couple identify the Harriers scanning the marshes. Then an explosion of Snow Geese took off which proved to be the harassment of 2 Bald Eagles. The Eagles landed in the mele, so we assume they caught one.

We left there and made it to the Concrete Ship where we got really great looks at Red Throated Loons a few feet off of the beach. Thousands of Black Scoters were cruising into the Bay, but too far offshore in the haze to get really good looks. We also saw 4 Northern Gannets - always a treat. At the Lighthouse, we saw other ducks on the ponds including Widgeons, Gadwalls, Scaup (Greater?) Ruddy Duck, Ring Necks, Swans and Coots. They are working on the beach, but we went out anyway in front of St. Mary's convent house and saw Purple Sandpipers, Ruddy Turnstones and one Oystercatcher on the jetties.

We toyed with the idea of the "poor man's pelagic" trip on the Cape May-Lewes Ferry, but opted to drive to Stone Harbor after lunch instead to try for the Snowy Owl. It was reported on the blogs on Thursday, so I thought we had a chance.

Success! We went out to the new platform at Stone Harbor Point. I scanned each dune and viola. The owl was sitting on top of a dune as plain as day. Just sitting there. Awesome. Dogs and people on the beach and everything. It just sat there.

We pressed our luck and went to Avalon Seawatch in search of Harlequins - no luck there but we did get Long Tail Ducks, Common Loons and closer Black Scoters.

The Owl photo is really hazy, but you can make out the owl shape dead center. Enjoy. 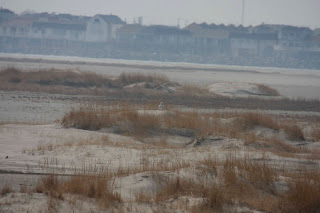 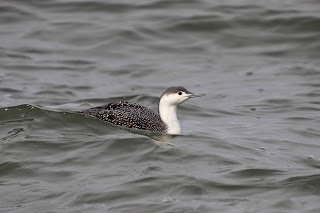 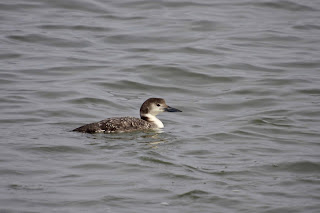 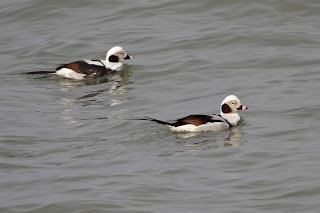 That's not a bad photo of the owl. And the loon shots are great. So crisp and clear. It sure was a great birding day.