My Garden Buddy - or - Pheasant Anyone?

As most of you know by now, Cocoa had major heart surgery last week. I am home from work today looking after her and working in the garden. I decided to raise the beds in the vegetable garden, so I went to Primex and bought bags and bags of mushroom compost, humus, etc and some 4"x4" rails yesterday in anticipation of making the most of my "sick day" today.

I was back and forth with the wheel barrow and supplies including the power saw to trim the rails and kept hearing something walking around in the leaves. I assumed it was a robin or junco or something. As I was trimming the rails, I saw something moving around outside the garden.
Well, there he was - a male Pheasant only a few feet outside the vegetable garden walking around. I froze in place and watched him walking up and down the hill for awhile, but then I had to move and keep working. So I got the power saw going, banging the rails into place, raking out the leaves etc, and he didn't seem to mind at all.

On my next trip to the garage to get supplies, I grabbed a handful of mixed bird seed and put it on the ground where he was poking around. Yep, he came right out from under my arborvite to eat it. 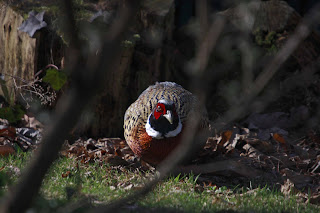 He isn't really afraid of me. He casually walks into the cover when I pass with the wheel barrow. But he is definitely afraid of the landscape crew next door with their leaf blowers. He really took off and hid when they showed up.

But then he was back. This time at the pond for a quick drink. Right on the patio. 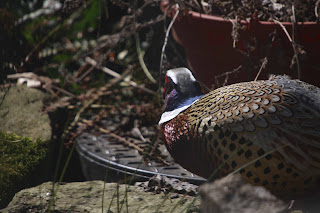 I haven't seen one of these in 20 years. I hope he stays around. And I hope Cocoa doesn't catch him.
Posted by Linda

Great shots Linda! Awesome to see a pheasant again in our area. What is most interesting is that this bird has adapted to suburban sprawl. One cock bird will require a few acres of undisturbed fields for his territory. Obviously, this is not the case. My guess is you will see more pheasant as they adapt to sprawl, just like the deer.