I found myself looking for an Acme anvil this afternoon. That's what I think of when I see a Roadrunner anyway. We were leaving Madera Canyon after a long day of hiking and birding when I spotted a Roadrunner in the pasture. "STOP!" "BACKUP! BACKUP! BACKUP!" "ROADRUNNER!" And there he was with a lizard in his beak scurrying through the field, hiding under scrub bushes. Lori kept pace with him for 1/4 mile in the van. Then he stopped, hopped up on a stump, and crossed the road. - Irony here - a Roadrunner running on the road. . . 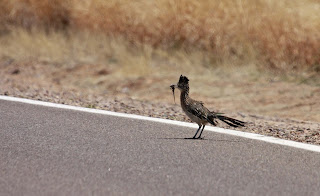 Madera Canyon was great. We spent over 2 hours at the picnic area alone seeing Mexican Jays, Acorn Woodpeckers, Black-throated Gray Warblers, tons of Ruby-crowned Kinglets and lots of Flycatchers. Boy, those Flycatchers are tough to identify. It's a good thing I have the BirdPod now. Flycatchers are best identified by sound. I was really proud when I identified the Dusky-capped Flycatcher by it's hweeew, hweeew call.

We also got to see the Arizona Woodpecker which is cool because it's brown rather than black.

Everyone we met had only one thing to talk about - the Elegant Trogon. Did we see it, were we going to try to see it, would we be disappointed if we didn't see it. What a pain. Here we are seeing amazing life birds and quantities of some other birds that we would not be able to see in our area and all they want to talk about is that damned Trogon. Truth be told, we did want to see the Trogon too. And we took the people's advise and went to the spots where the Trogon was said to be seen recently. We parked up at the upper canyon and hiked the Carrie Nation Trail where everyone else was going. We hiked and hiked. We even heard the Trogon "bark" in the distance. Then, Connie quit. Tara quit. Lori and I trudged on. We lost the trail for awhile but found it again and found a photographer. We asked him about the Trogon. He showed us photos on his camera's LCD screen and told us that we had another 20 minutes of steep hiking ahead of us. We quit.

Let's just say that we heard the Trogon and had a pleasant lunch of PBJ sandwiches at the picnic area. Did I mention that we saw a Roadrunner? Meep, meep.
Posted by Linda